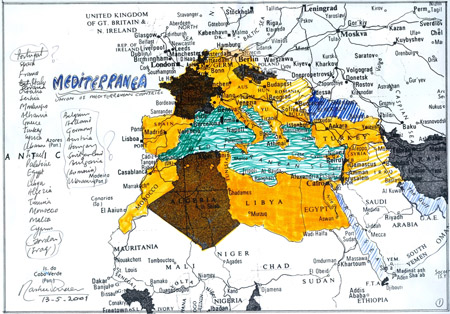 Calvert 22, which opened its doors as a foundation in the summer of 2009, is the UK’s only institution committed to the presentation of art from Russia and Eastern Europe. Its inaugural exhibition, comprising five leading Russian artists, was curated by David Thorp and was followed by ‘Re-Imagining October’, Mark Nash and Isaac Julien’s darkly comic look at the shared history of the former Soviet Union. More recently there have been solo shows by Pavel Pepperstein, Olga Chernysheva and Alexander Ponomarev, the latter of which immediately preceded ‘Raising Dust: Encounters in Relational Geography’. Curated by Richard Appignanesi, the editor of Third Text, this exhibition comprised 11 artists and was bound loosely together by notions of identity, place and our most nifty household object, the broom.

‘Raising Dust’ began in Jodhpur, India, with Navroze Contractor’s colour photographs of people sweeping the streets with grass brooms. These 2009 works, from which the exhibition’s title was derived, are the basis for the metaphorical ambitions of Appignanesi’s curatorial statement, which suggests that the ‘dust’ that rises from these photographs helps manifest a complex ‘agitation’ among the esoteric art works on display. While these ambiguous connections didn’t result in a coherent narrative, there were oddly endearing moments, such as seeing Sašo Sedlacek’s prototype for the harnessing of Western faeces (AcDcWc, 2010) next to Marina Gržinic’s and Aina Šmid’s verbose diatribes on the ills of capitalism in a video and written manifesto (Naked Freedom, 2010). The latter makes connections between private meeting spaces in both Ljubljana, Slovenia, and Durham, North Carolina. In Slovenia, a group of seven artists gather to discuss how art can be used as a tool for social activism, achieving this through captivating physical drawing and performance; disappointingly, the US component – a workshop with young Americans discussing socio-political matters with a Ghanaian intellectual – lacks the political urgency or the lyrical imagery of the Eastern European section of the video.

In Rasheed Araeen’s ‘Mediterranea’ (2006–ongoing), speculative interventions into physical borders are presented as a series of annotated maps. For example, a planned rail network connects North Africa to the European coastlines, while later stages visualize the re-opening of the Silk Route, a proposal which imagines a unification of Africa, Asia and Europe as a resurgent civilization. Recent exhibitions have seen one-dimensional map works by the likes of Richard Hamilton and Anna Boggon, but Araeen complicates this form of presentation both with his vivid imagination and his scrupulous knowledge of his subject’s geopolitical history, which sees the artist working through various scenarios for the post-colonial world. Elsewhere, Ranko Bon invites guests into the stream of his unconscious as the visitor ventures into a searchable anthology entitled Residua, which captures personal ruminations from 1976 up to the exhibition’s opening night in December 2010.

The show’s loose character seemed, at times, to accomodate so many facets that it misplaced the art works’ relevance. For instance, Isa Rosenberger’s political ballet Espiral (2010) and Vlad Nanca’s readymade Works (2010) seemed to linger around the exhibition space without managing to elucidate either significance or emotion. ‘Raising Dust’ was filled with rich sources of transgressive political discourse, but succeeded only when Appignanesi selected work that is driven either by its own simplicity or didacticism and when intent wasn’t spoiled by convolution or opacity.