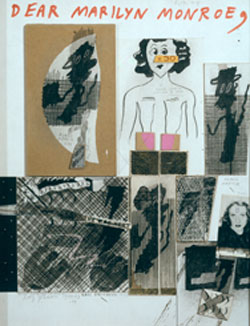 Sometimes the strangest people slip through the cracks of art history. On paper everything about Ray Johnson screams ‘important artist’. A graduate of Black Mountain College and a friend of Jasper Johns, Robert Rauschenberg, Cy Twombly and Andy Warhol, his name remains largely unknown, despite a prestigious retrospective at the Whitney Museum in New York in 1999. Yet Johnson’s historical place is assured, if for no other reason than his involvement with Rauschenberg’s seminal assemblage Short Circuit (1955), which included Johns’ first Flag, a painting by Susan Weil and a collage by Johnson. Although now overshadowed by his illustrious collaborators, this solo show provided the chance to judge him on his own merits, and possibly salvage him from art history’s footnotes.
Certainly Johnson’s CV is impressive. He was one of the first artists to adopt the celebrity iconography of Pop art in the 1950s, Performance and happenings in the 1960s, and, as the founder of the ‘New York Correspondance [sic] School’ in 1962, one of the pioneers of Mail art. While Johnson’s anteriority is established, the overwhelming feeling when viewing this exhibition was of dutifully paying respect to an overlooked artist, rather than of being impressed by the works themselves, which were slight and unassuming. Closer inspection of the collages revealed more interesting factors at work, however. Untitled (Cupid with Mount Rushmore II), from 1974, besmirched images of Mount Rushmore and Rimbaud with Jackson Pollock-like drips, creating a symbiosis of Johnson’s Abstract Expressionist inheritance with his Pop art inventiveness.
Pieces such as Untitled (Fear Four Forks) (1971), while including all the trademarks of a neo-Dada collage, also incorporated a narrative autobiographical element and knowing references that mark Johnson out as an artist’s artist. ‘The first Christo I ever saw was in Sidney Janis’, he writes on the canvas, in his immaculate and anally retentive handwriting. He continues: ‘I began a correspondence with Christo in Paris … They wrote saying they would be in New York and would like to meet me. Daniel Spoerri told me that Mrs Christo was the daughter of a French general.’ While pieces of art-historical celebrity gossip such as ‘I once watched Elaine de Kooning eat a hamburger in High Point, North Carolina, with a pair of pliers’ are amusing for the initiated, and Johnson’s works offers intriguing insights into the New York art scene and Franco-American artistic relations, this insider information perhaps explains why his work failed to appeal to a wider audience.
Other pieces show Johnson as an artist determined to sabotage his own career, for example in John Russell (1977–93), which features his correspondence on the subject of Rauschenberg’s aforementioned Short Circuit. ‘Dear John Russell’, Johnson writes, ‘I have no remembrance of being asked by Robert Rauschenberg in 1955 to incorporate my work in any work of his incorporating the work of Sue Weil and Jasper Johns.’ It seems from this exchange that Johnson’s selective memory suggested a wish for obscurity, ‘forgetting’ his involvement in his most important collaboration, and instead recounting the prosaic detail: ‘I do remember at that time a small orange tree Bob and Sue had.’
The exhibition also posited Johnson’s hermetic, anti-art world stance as problematic. While Johnson professed to abhor and reject the machinations of the art market, his works suggest a man fascinated with celebrity and more than a little star-stuck by his more famous peers. Lists of how many hamburgers celebrities ranging from Rita Hayworth to Joseph Cornell ate per week adorned one of the photocopies that covered an entire wall of the gallery, while across from this a vitrine contained an item revealing Johnson as the best-connected hermit in Connecticut – his well-thumbed address book, which on the first page alone boasts Vito Acconci, Lawrence Alloway, Arakawa, Arman and John Ashbery among its entries.
The simultaneous screening at Camden Arts Centre of John Walter and Andrew Moore’s documentary on Johnson, How to Draw a Bunny, confirmed him as an artist ripe for re-evaluation but also defined his problem. Interviews, testimonies and eulogies from Roy Lichtenstein, Christo and Jeanne-Claude (or Mrs Christo, to use Johnson’s appellation), Chuck Close and James Rosenquist focused on Johnson’s quirky personality and ultimately tragic life, to the detriment of a discussion of his work. As the film narrated the bitter-sweet biographical details and his far more successful contemporaries gave wry commentaries on his quirks and tics, the epithet applied to Johnson in an article from the New York Times in 1965, describing him as the city’s ‘most famous unknown artist’, returned to haunt him, as a prophecy of his eventual epitaph.