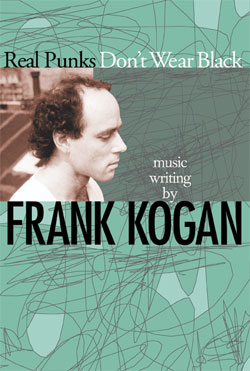 Frank Kogan is a rock critic, which means he writes about things like Slade’s ‘music-hall chug’ and the ‘raging coldness’ in Donna Summer’s voice. It means he wonders how, in the heyday of Bob Dylan and the Rolling Stones, ‘self-destruction came to be the truest noise on the radio’. And being a rock critic also means – for Kogan, at least – that how you write is as central to the job description as what you write about, because the value of the subject is always up for grabs. Because the subject of the subject is always up for grabs. Because the fans and the drugs and the hairstyles and the arguments and the anger and the boredom are as much a part of pop music as the music and the critic, the reader and the whole compromised, idealistic enterprise of criticism. So the best writing needs to be as sharp, romantic, challenging and catchy as what it’s trying to describe, but also willing to be as profane, stupid, noisy and contradictory.

And that’s why Kogan’s brilliant, all-over-the-map collection Real Punks Don’t Wear Black has something to offer people who – unlike the author – don’t fret much about whether Mariah Carey is great or god awful or what. (And also why a lot of readers might end up throwing the damn thing across the room.) The book brings together essays and reviews published in the Village Voice, articles from Kogan’s long-running cult fanzine Why Music Sucks, letters to editors and friends, Internet message board postings, poetry and big chunks of adolescent journals. You get ‘the whole mess of Frank’ – from acting out to heavy-duty theory-spinning. And you get ‘music writing’ that’s also about the social terrors of junior high school, about the lure and numbness of the suburbs, about how communities are created and threatened, about bohemian self-hatred, about the limits of deconstruction and ultimately about what music writing – in fact, all writing – can and should do.

In Kogan’s terms, being a rock critic is about broadening the idea of what counts as criticism. Not everything counts, but because everything potentially can, you need to risk being ridiculous and rigorous to figure out what is worth saying. Music – and all the other stuff it includes – is, most essentially ‘an activity in which people participate’: a social activity and therefore an intellectual activity. Which means: Kogan is a rock critic because he’s interested in thinking, specifically in those forms of thinking called ‘rock’ and ‘criticism’. So he treats the New York Dolls as his favourite philosophers and Ludwig Wittgenstein as his favourite band. (You just know he has ‘meaning is use’ written on his loose-leaf notebook in purple magic marker.) He writes as if he’s dancing, fighting, killing time and trying to change the world.