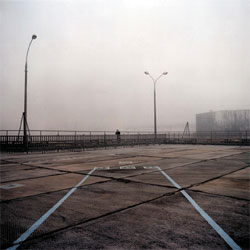 During the Cold War the major political players tried to trump each other with space technology. Most notably, the Soviet space station Mir and the US space shuttle programme attempted to assert their respective country’s invulnerability and dominance. The photographs from the archive of the German news magazine Der Spiegel that lined the way into ‘Rückkehr ins All’ (Return to Space) provided the historical backdrop to the space race, which persisted until 1989. Yet this multi-layered exhibition focused on contemporary artistic production, from painting to internet art, taking history only as a tentative cue.

With the immediacy of the Soviet–American confrontation gone, artists have taken a more ‘relaxed’ point of view – such was the curatorial premise of this exhibition. After their excitement about space in the 1960s and subsequent disillusionment from the 1970s onwards, artists’ interests came to be dominated by historical and cultural references. Tom Sachs’ The Crawler (2003), a large-scale model of the space shuttle Challenger, which broke apart shortly after take-off in 1986, was a memorial to technology that NASA is about to abandon. Similarly the video Dreamtime (2001), by Jane and Louise Wilson, documented a relic of space travel – the former Soviet rocket launch station in Baikonur, Kazakhstan. Both works figured as direct and literal memories of the techno-political ambitions to which the Soviet Union and USA once clung.

Yet human expansion into the universe has been a topic of cultural production in literature and film since long before the space race: early science fiction provided projections into Utopian imaginings and places beyond planet Earth. The genre has produced artefacts, events and social communities with considerable cultural impact, from popular movies to fan groups such as Trekkies. Now it serves as instigator: The Captain (2005), a video installation by Bjørn Melhus, could be an excerpt from the classic Star Trek series. The rigid acting, props, setting, costumes and lighting in this enactment of soundbites from popular sci-fi shows and films emulated a 1960s’ television production. Sylvie Fleury’s installation First Spaceship on Venus (1996) likewise drew on graphic design from 1960s’ trash novels. William Kentridge delved even further back into the century, drawing inspiration from the first sci-fi film, Le voyage dans la lune (Journey to the Moon), by Georges Méliès, made in 1902. His multi-screen animations Journey to the Moon and 7 Fragments for Georges Méliès (both 2003) were journeys into space and equally into the making of a work of art. Kentridge featured both as the creator of a universe and as its protagonist.

Such works revealed the retrospective state of culture, while others dared to venture beyond, without reference to visual predecessors. Michael Sailstorfer’s Cast of the Surface of the Dark Side of the Moon (2005), a thin, irregular black resin shape, illuminated with spotlights, was a deadpan rendering of something invisible that paid tribute to a popular LP. Janek Simon’s fantasy Departure (2003), a video in which the church spires of Kraków in Poland were launched like rockets into the sky, could even be read in a political sense: sending the power of the church to the stars. Still, both referred back to cultural environments, while Beate Engl and Björn Dahlem proceeded in the opposite direction, to instil space into the everyday. Engl fitted one of the museum’s utility rooms with neon lights to simulate a starship interior, while Dahlem’s wooden sculpture Black Hole (2005) imagined the physical phenomenon with household furniture wedged into a star structure made with wooden planks. It seems that any understanding of space needs a foothold in the attainable environment.

From the ground the sky remains a huge mysterious canvas. Thomas Ruff’s photographs printed from negatives obtained from the European Southern Observatory in Chile (‘Sterne’, Stars, 1989–90) are images of night skies otherwise only seen by experts with specialist equipment. Damien Hirst’s Calibration Target for Beagle 2 (2002), in contrast, took on a utilitarian role, supplying a technical component for the calibration of colours for a British space probe. If celestial navigation is still a viable tool, the universe has practical meaning and existential importance, yet it cannot be divorced from socio-political conditions on earth. Mars Patent is a website (www.mars-patent.org, running since 1999) that invites only female contributions to an exhibition space on Mars. While its instigators highlight the gender imbalance, Marko Pelijhan intends to reverse ownership. LADOMIR TERRITORIES, from the ‘Resolution Series Projects’ (2005), showed a computer simulation of a satellite for media activists he is planning to launch in 2012. The future space race may be a competition for independent communication networks, attempting to claw back the use of space technology from the political and financial superpowers.