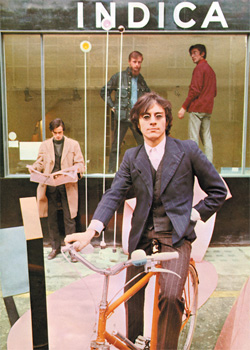 Indica was the epitome of 1960s’ London and all who swung in it. The gallery was established by John Dunbar, Peter Asher and Barry Miles, who ran the bookshop; Paul McCartney, who was seeing Asher’s sister Jane at the time, helped with the shelving and designed some wrapping paper, while a young Marc Bolan (then Mark Feld) hung around and ran errands. Dunbar was married to Marianne Faithfull, William Burroughs lived nearby, Roman Polanski and Sharon Tate dropped in on opening nights and Robert ‘Groovy Bob’ Fraser sponsored ‘Unfinished Paintings and Objects’, Yoko Ono’s 1966 solo show, where she and John Lennon first met and he allegedly took a bite from the apple on the plinth. Whether or not you are impressed by the devil-may-care antics of celebrities and rich collectors, by tripped-out sexploits and crazy avant-gardism, Indica was a magnet for and manufacturer of such episodes for two intense years during the mid-1960s. Forty years on, the British media are still disproportionately proud of the international reputation the capital city generated at that time and often force links between now and then in an oxymoronic bid to sustain the image of an epicentre of counterculture.

To mark the ruby anniversary of the gallery’s short life in Mayfair, Riflemaker gallery in Soho, ‘became’ Indica for three months, comprising a two-part exhibition, the second of which focuses on Miles’ bookshop and includes events with contemporary spoken-word performers. Relocating a gallery in both time and space is as spurious a claim as any to reconstruction, but there is something particularly troubling about this venture. As the counterculture that Indica embodied has now been historicized, institutionalized and merchandized to the hilt, Riflemaker can never attain the verve or chutzpah of the original, despite working in association with Dunbar and Miles. It’s like making a mute tracing of a great painting, missing the very contingency of the brushstrokes that make it sing or scream or hum.

With the contemporary art market and wider cultural appetites ready-primed for 1960s’ revivalism, there is little risk in exhibiting work by Indica’s original artists. Riflemaker operates within a system of market value and legitimization that has absorbed previous models of gung-ho adventurism (a further reminder of this is the fact that White Cube has recently opened new premises on the old Indica site), and this cannot be made temporarily transparent. Despite the enervating wall texts, which over-explained the historiography of the work and ossified the enigmatic qualities of, say, Liliane Lijn’s kinetic poem, Act as Atom (1966) and the Baschet Brothers’ chromatically tuned crystal, the exhibition also lacked the rigour of a museum-quality representation. Neither did it possess the vigour of a contemporary reinterpretation: by simply placing work by Indica and Riflemaker artists side by side, an expression of ideological continuity was replaced by an exercise in visual similitude. The link drawn between Counterpoint Piano (Second 9:8) (2006), Conrad Shawcross’ spinning dervish of wood and light bulbs and Takis’ blinking Signals (1957), for instance, was conceptually reductive. The physical fact of light and kinetics flattens the acres of phenomenological terrain that separates the two artists.

An audio compilation of music, spoken word and abstract sound playing continuously in the gallery, on the other hand, harnessed the archival potential of the project, restoring energy through montage and fragmentation. The series of programmed events also presented an opportunity for something more lively, explosive even, although throughout the first half of the exhibition it mainly resorted to the safety of staid artist talks. I attended a screening and ‘in-conversation’ with filmmaker Peter Whitehead. He regaled us with stories of his clashes with authorities, misogynistic anecdotes of his triumphs over women, an account of how he came to document the legendary poetry event at the Royal Albert Hall in 1965, where Allen Ginsberg, Gregory Corso and others recited to a throng of 5,000, and boasted of how avant-garde he was before becoming disillusioned with the counterculture scene and upping sticks to train falcons in the desert for 25 years. If nothing else, it was interesting to view the construction of mythology at first hand. Marianne Faithfull, meanwhile, sat restlessly in the audience exclaiming how embarrassing it had all been back then and asking whether it was time for a fag break yet. It made for a woeful reminder that sometimes it is not good to stir the pool of the past with the stick of nostalgia. If a gallery truly wishes to relive cultural radicalism, it needs to address the structures of the present, not the aesthetics of the past.