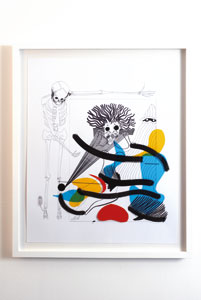 The lonely scene depicted in the drawing More, in the way of failure (2007) is representative of all that’s compelling in Rob Churm’s prolific and mainly monochromatic drawings. Bizarre iconography, expressionistic scrawl and the crisp discipline of graphic marks are here conjoined in evoking an unknown world. Churm’s felt-tip and biro drawing shows a robot that has taken a circuitous journey across a darkened field, traversing a makeshift stage, before halting to gaze up into the black mass of a tree. The progress of the robot is marked by a trail of mechanical footprints, looping as if following a how-to-dance diagram. The rhythmic black marks made by the metal feet find an echo in the tight vertical and diagonal bands of Ando Hiroshige-style rain that cover the sky. The dark bloom of shadows and foliage is loosely described in indian ink, serving as a counterpoint to the detailed and precise lines of the robot, the rain and the footprints.

In common with much of Churm’s work, this scene has a surreal quality, and it is possible to make out what is occurring within the frame, even if it doesn’t chime with any recognizable narrative. However, the balance between clean lines and frenzied doodle is not always maintained – as, for example, in the small drawing entitled In the thick of the guilt trip (2007), in which densely worked areas of cross-hatching and feathery brushstrokes are used to obscure almost completely a smiling cartoon face. The title of one particularly elaborate drawing, It becomes the thing (2007), seems to allude to a Frankenstein-like compositional process but also describes the disorientating effect of attempting to interpret this densely textured work. Other drawings, such as No Silver Bullets (2007), are all clean contrast: a single Japanese-style symbol hung with a few simply drawn spiders hovers over a harlequin-chequered moon. Yet even the more easily decipherable of these drawings have the inexplicable quality of strangeness that Jacques Lacan called l’objet petit a (object little a); something that is like us and yet unfamiliar is conveyed via Churm’s pictorial language of robots, skeletons, cartoon animal faces, shadows, stripes, waves and clouds. These forms, and their attendant shadows of black scrawl, orientate the viewer towards the world, which slides away the moment we jolt awake.

The half-light of bars and clubs is another important context for considering Churm’s work; he is also the front man for Glasgow ‘what wave’ band Park Attack and the designer of numerous posters, flyers and T-shirts. It could be said that the play of mess against neatness in his drawings finds an aural corollary in the music of Park Attack. Many of the influences that may be detected in his work seem to emanate from illicit places and borderline states of mind – Churm’s characteristic use of harlequin checks around the edges of his compositions, for instance, brings to mind Stanley Mouse and Alton Kelley’s poster designs for the Grateful Dead. Something of the restless energy of Raymond Pettibon can also be found in the artist's work – although the frequent inclusion of Tippex in Churm’s lists of materials seems to point to his attraction to controlled chaos. Perhaps his work most closely allies itself with Japanese illustration, specifically the ukiyo-e of Edo-era entertainments and the later psychologically charged ‘I-comics’ of Yoshiharu Tsuge.

There have been two notable developments in Churm’s work as it appears in this exhibition: the absence of words and the introduction of colour. The information concerning names, dates and venues on his early poster works is absent, as are the evocative titles and phrases, such as Through the Night or Not These Tones (both 2005), that previously appeared in certain works. Perhaps this contributes to a sense that his work has slipped away from the specific and local towards a wider tradition of what could be called ‘existential illustration’. Colour appears as accents in several of these recent works, such as the overlapping coloured acetate shapes that appear in one untitled drawing or the six brightly coloured thumbprints that highlight another untitled work. In Gorgonzola (2007), though, colour is the main thing – a wash of bright blue ink forms the background sky as a series of amorphous monochromatic shapes converge in the foreground. It is impossible to know what we are looking at, but it feels
strangely good.