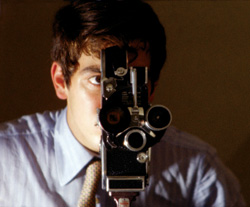 ‘There is no fear of isolation while the filmmaking continues’, Robert Beavers once observed about his particular relationship to the craft. ‘Its development is response enough.’ The enigmatic and intensely private conditions under which Beavers has laboured for over 40 years have indelibly coloured the remarkable body of work presented in this comprehensive Tate Modern retrospective. ‘My Hand Outstretched to the Winged Distance and Sightless Measure’ provided the elegiac title for the epic chronological cycle comprising 18 of Beavers’ completed films (many of which he has re-edited in the past few years) produced since 1967, the year in which he and his lifelong partner, the then already eminent filmmaker Gregory Markopoulos, left their native USA for Europe. Their relocation was clearly intended as more than a mere geographical distancing from the vibrant American experimental film scene at that time, with both filmmakers refusing to screen their works in the USA (Beavers did not do so again until 1996) and Markopoulos requesting the removal of the chapter on his work from P. Adams Sitney’s seminal 1974 textbook of avant-garde cinema Visionary Film. (Following Markopoulos’ death in 1992, the chapter has subsequently been restored to the text, with Beavers’ permission.) Indeed, for Beavers at least, an 18-year-old filmmaker at the beginning of his career, this self-imposed exile has, until recently, all but ensured his omission from any ‘official’ narrative of experimental filmmaking.

A sense of blissful isolation permeates Beavers’ jewel-like films, generally composed of precisely edited and exacting sequences of images and short scenes that rapaciously cap-ture the processes of filmmaking itself, Beavers’ intense emotional and intellectual relationship with Markopoulos, and the vividly beautiful rural and urban landscapes encountered in their newly adopted European surroundings. Structural and mechanical devices used to suture together the image sequence or to emphasize the ‘objectness’ of the depicted forms frequently interrupt these elegantly composed visual chains. Images are by turns framed and obscured through the use of opaque mattes, which play with the inherent antagonism between illusionistic depth and the flatness of the projection screen. Tinted light filters are applied to the lens to create carefully masked patches of saturated colour emphasising the passing of light through the celluloid film strip. Beavers frequently employs the technique of turning the lens on the turret of the camera, causing the image to slide off the screen and introducing interstitial moments of blackness to the films’ hypnotic procession of images.

Early Monthly Segments (1968–70/2002) provides a notional prologue to the entire cycle, encompassing the entire range of these visual leitmotifs and containing sequences of film that are reused in several later works. In this, the earliest of the films shown here, images of the filmmaker dominate. As if watching the uncertain moments in which the artist holds a camera for the first time, Beavers tentatively establishes his relationship with the device, exploring its ability to capture the world around him and what it may reveal about his own image. The autobiographical tenor of the film is heightened by scenes depicting interactions between Beavers and Markopoulos as well as recurrent shots of Beavers in his studio – in this instance a simple table in a sun-dappled room – cutting and editing carefully arranged fragments of film. Beavers, like many filmmakers who began working in the 1960s, uses reversal film stock, allowing him to view the positive images on the film strip by holding it up to the light. Because he cuts his films manually and edits the sequences through visual memory alone (only in the making of his most recent works has he projected the images during the editing process), the final compositions preserve a patina of this intricate handcrafted process.

Work Done (1972/1999) masterfully demonstrates Beavers’ use of metaphor and visual allusion, drawing correspondence between a series of daily routines and traditional craft techniques and the ‘work’ of filmmaking itself. Shot largely in Florence, entrancing images of trees being felled, an antique book being rebound or traditional Florentine blood pancakes being fried in lard become meditations on the notions of process and transformation. An abstract narrative is subtly suggested, as in all his films, through the fragmentation and subsequent dispersal of images that develop across each work’s duration. Other narrative impulses derive from tacit references to an assembly of historic artistic personalities including John Ruskin, Leonardo da Vinci and the architect Francesco Borromini. More evocative than illustrative, films such as From the Notebook of … (1971/1998), filmed in Florence and inspired by the notebooks of Leonardo, and the stately Ruskin (1975/1997), encouraged by a reading of The Stones of Venice (1851–3), form redolent portraits of these ancient cities viewed abstractedly through the eyes of Beavers’ conjured forebears.

During the 1980s Beavers and Markopoulos established the Temenos (meaning ‘a sacred place’) – a piece of land in Lyssaraia on the Peloponnese in Greece that the two filmmakers considered the ideal location for screenings of their work, a project Beavers continues to this day. This eye-opening retrospective however, one of several recent public presentations of Beavers’ work, signals the filmmaker’s tentative emergence from self-imposed obscurity and, more significantly, from out of the shadow cast by Markopoulos’ indomitable legacy, to claim his long overdue place in the pages of experimental film’s polyphonic narrative.