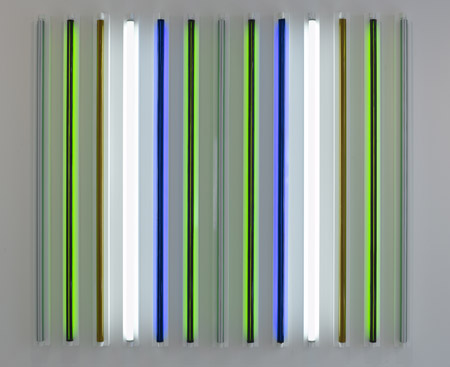 On first viewing, the works in Pace Gallery’s recent Robert Irwin exhibition, ‘Way Out West: New Experiments With the Perceptual Qualities of Light’, were surprisingly different to his usual expansive, ethereal environments, which use scrim, natural light and reflective panels to subtly (and gorgeously) alter our perceptions of architectural spaces. Instead, these six different rows of vertically oriented, coloured fluorescent lights looked like outdated Dan Flavins. I began to worry that at this late stage in Irwin’s career – he is 82 – the artist had lost his desire to be innovative: instead of making objects (as he always had) that challenged the market through their use of light and space, he was creating works perfectly crafted for a collector’s living-room wall.

But then the press release reminded me that Irwin had made works like these during the 1970s (he returned to them in 2007), which feature flourescent bulbs rather than his signature scrims. I began to scrutinize the lights and noticed some fascinating differences between them and Flavin’s characteristic bulbs. The gels Irwin uses to give colour to his lights are quite different from those that Flavin used. Most are much darker greens and blues and they do not completely wrap the lights like Flavin’s do. Instead Irwin runs variously sized stripes of gels down his bulbs’ surfaces. These stripes are parallel with the long sides of the bulbs and are not simply decorative but have a particular function. Their colour and size and the distance between them – there were often two stripes facing the viewer – govern the brightness and the hue of the light each bulb gives off.

The light produced by each piece ranges from dark and severe to lambent and gauzy. Significantly, the precise amount of light given off by each of these pieces can also be electrically adjusted. While Irwin had chosen the specific settings for the works in this exhibition, each actually has four states of being, which are managed by switches installed as part of the work. Two states of the works feature all of the bulbs on or all of them off, and two others featured particular combinations of certain lights on and others off.

Spending some time with the show, I found the Irwin I had originally come to see: the Irwin mythic hero of the Light & Space movement; the Irwin who, starting in the early 1960s, had systematically interrogated his art-making practice – specifically his abstract paintings – to explore how little a visual experience could be comprised of and how the effects of painting could be extended to the environment outside the traditional art work. (This process is documented in one of the best biographies ever written about a contemporary artist, Lawrence Weschler’s 1982 Seeing is Forgetting the Name of the Thing One Sees.)

Running almost concurrently with the Pace exhibition was a show at Galerie Xippas in Paris (amazingly, Irwin’s first solo exhibition in France), also titled ‘Way Out West’. Although this exhibition featured six almost identical works to those in the New York show, the show was completely different, due to Irwin’s emphasis on site-specificity and the ever-minute differences between ostensibly similar architectural spaces.