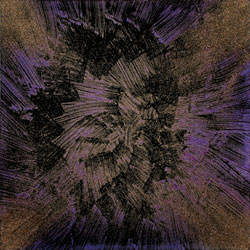 For their penultimate show as directors of the Palais de Tokyo, Nicolas Bourriaud and Jérôme Sans chose to mount the institution’s first historical survey exhibition and to resurrect the career of the late French artist Robert Malaval. What will most likely be remembered after all this, apart from the fact that Malaval achieved so many terrific stylistic somersaults, is the work that first excited French audiences over 40 years ago: his ‘Aliment Blanc’ (White Foodstuff, 1961–6) series. It is as if he was the zoologist of a sometimes comic, sometimes threatening, organism that had emerged out of a plate of fromage blanc, penetrated everything and threatened to conquer the world. In the relief sculpture How Do You Do? (1961) it’s a papier mâché-like sludge roaring out of the mouth of a stove. In the chilling Aliment Blanc Cultivable: Femme Assise (Cultivatable White Foodstuff: Seated Woman, 1964) it’s a waxy slime emanating from candles that have melted the head of a woman in a wheelchair. And in another extraordinary series it’s the subject of densely packed, often diagrammatic Robert Crumb-like cartoon drawings which speculate on the lifespan of the organism in more detail, while it occasionally bursts out of orifices and coalesces into bogeymen.

So captivating is ‘Aliment Blanc’ that it was disappointing to read the biographical sketch in the catalogue and discover how, during these years of his greatest success, Malaval embellished his persona with so many gimmicks: only wearing white, only eating white, plastering a friend’s apartment in toothpaste. In fact, after being convinced of Malaval’s talent, it’s disappointing to read almost any of his biography, as the moment he found success he left his wife and children and just seems to have lived faster and more recklessly until he committed suicide in 1980. One can scour his life to find a rationale for this excess, but ultimately it seems that what he suffered from was simply – in the well-chosen words of his friend Jean-François Bizot – ‘a prolonged adolescence’.

Malaval was born in Nice in 1937 and, although he left the city in 1956, he has sometimes been thought of as part of the School of Nice, the not so helpful appellation that binds Martial Raysse, Arman, Ben and Yves Klein. But Malaval was simply too egoistical for groups, and, perhaps because he never trained as an artist, he seems always to have thought about art instinctively rather than strategically; nevertheless, he was undoubtedly a Pop artist – as much as any of those Niçois were. The emphatically flat pastel paintings he produced in the early 1970s are candyfloss Henri Matisses: Tutti-frutti (1973) is a dizzy, ditzy grid of pink, blue, yellow and green dots; Fraise et Pistache (Strawberry and Pistachio, 1973) might have been retrospectively named after the ice-cream blobs of colour in the centre of the similarly dotted abstract design. They seem empty, consciously stupid paintings, and while the selection that Sans and Bourriaud also hung at the Lyon Biennale weren’t so appealing, they probably had a lovely frisson of satire back in the day.

In the 1970s Malaval increasingly wanted his art to give the same ephemeral pleasures as he got from Pop culture; just another ambient distraction. For one show at CNAC in Paris in 1971 he built a series of rooms filled with juke-boxes, pinball machines and light projections, piping in music and sounds that he had recorded from nature. Soon after, when Rock music became important to him (there was a slightly silly obsession with the Rolling Stones, which issued in some prints and, on a personal front, a rock ‘n’ roll image change which went along with increased boozing), he started to paint with glitter and produced his last great pictures. Niagara Gold (1975) has broad stokes of gold glitter cascading over a purple ground; Banzäi II (1977) is a black pyramid silhouetted against a violently silvery sky; Sang Viennois (Viennese Blood, 1977) is a proudly frivolous purple canvas which seems to be filled with burning debris spilling from the gold flames at the corners. They anticipate the monumentality and machismo of 1980s’ painting yet, despite being laden with emotion, they’re light enough to undermine it. That Malaval was still painting these startling pictures in his last days is sad; they brought him little success. But he was, as the title of the show, ‘Kamikaze’, suggested, fast and determined to the end.