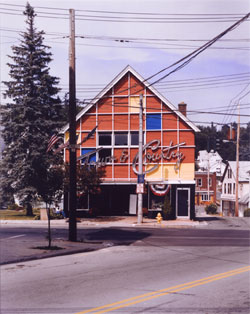 Photography is all about arbitrary borders, about the illusion of self-containment and completeness. We want to believe that we’ve got the whole picture. In his large-format photographs of often exorbitantly bland subjects, Roe Ethridge undermines that very certitude. A pine tree, a watermelon, suburban signage, a few portraits – the work appears to be little more than the erratic product of an unsettled, expansive attention. Yet taken together in his various series (this show featured selections from two) or looked at generally, Ethridge’s groupings allow his images to bounce off each other, their cumulative effect suggestive rather than illustrative of his fundamental inquiry into our ready assumption that photography will tell us something true.

‘County Line Plus Town and Country’ was a selection from two recent series, the C-type prints unified by their exploration of various borders and boundaries, imaginary and real. In Hedge, Miami (2004) the surface is dominated by the rust and dried jalapeno-coloured leaves of a hedge, its function revealed in the lower left corner, where a tiny bit of brick pavement peeks out. That small revelation converts what is almost an abstract colour and shape study into a baneful, eerie creature. A similarly apparently benign but actually quite sinister image is Canada (near Banff) (2005), a snowy, wooded pastoral traversed by a stream. The natural border is completely overpowered by the bristling remains of a forest devastated by logging. Dense clusters contrast with more sparsely flecked areas, and from a few feet away the photograph has the erratic profile of a denial-filled polygraph session.

Other kinds of separations are indicated by images of commercial mini-mall signs. Borrowing from the former Main Street idea of wooden shingles, the individual strip-mall residents list themselves on one big roadside billboard. The odd juxtapositions – a nail salon, an off-track betting joint, a kosher diner, a pizza parlour, a launderette and video game shop – are offered up for view with editorializing or judgement in Cedarhurst Mall Sign (2004). They are facts of suburban American life, obviously peculiar when extracted from their usual surroundings. Ethridge shoots the signs at an angle, emphasizing letter shapes and colour choices, the eccentric line-ups supplying their own commentary; liquor stores and weight-loss centres dominate. The particular economic moment of such signage stands in contrast to Town and Country, Liberty, New York (2005), which shows a dilapidated bungalow-style store in a bedraggled corner of upstate New York, with the words ‘Town and Country’, aspiring to some upscale respectability, scripted across its rust-coloured façade. A young black kid sits on the bench outside, and the image is bisected by a telephone pole bristling with American flags. Alongside the exuberant strip-mall signs, the once aspirational, now passé script is like a young man grown old.

Clearly referencing Thomas Ruff, the Bechers and especially Chris Williams, Ethridge also shows unexpected painterly influences, particularly in his portraits. Holly at Marlow and Sons (2005) is like a merging of a Madonna by Sandro Botticelli (in the tilt of the head, a gesture at once contemplative and judging) and Jean-Luc Godard (the young woman an echo of Anna Karina, in her impenetrable, futuristic black and white turtleneck) – in itself no mean feat. The blue-filtered Mary Beth Holcomb (2005), with her downcast eyes and almost surreally truncated arm, could be a modern-day cousin to Jan Vermeer’s women. Most unsettling and effective is the seemingly drab Rick Holcomb (2005). The microscopically close image – you can actually see his contact lenses – shows a man with a squarish, stubbled face, a sideward glance and open mouth approaching a smirk, as though he’s hatching some plan. With the face slightly shadowed against a completely neutral grey background, Ethridge achieves something close to a Caravaggian sense of emotional betrayal in what is essentially a head shot.

Paul Outerbridge is the steady backbeat to Ethridge’s work. Like Outerbridge, Ethridge incorporates the ridiculous and the sublime, ignoring the artificial conceits that divide photography into fine art and commercial work, embracing whatever will further his investigation into the singularity of the commonplace. Ethridge assumes a certain sophistication of his viewer, born of familiarity with the conventions of editorial photography. By showing tableaux of determined ordinariness, Ethridge manages to convey the much larger context from which these are suggestive rather than definitive extracts. The approach is playful, with a humour that mercifully softens the bleakness: what could be merely reportage becomes