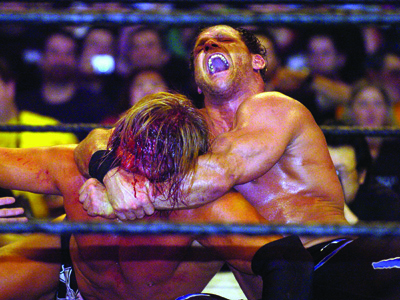 Earlier this summer Vince McMahon, the larger-than-life chairman of World Wrestling Entertainment Inc. (WWE), was blown up by a car bomb. Two weeks later the body of Chris Benoit, a former world heavyweight champion wrestler, was found hanging by his neck from a piece of gym equipment alongside the bodies of his strangled wife and suffocated son. The day after the Benoit tragedy was announced, McMahon appeared on television miraculously resurrected. He admitted that the car bomb had just been a plot device in the ultra-violent soap opera that is American professional wrestling. Benoit, he awkwardly clarified, really was dead. Among the WWE’s plethora of role reversals, shocking dénouements and endless cliffhangers, this was about as outrageous as you could get. Not so much because of Benoit’s murder/suicide as because it forced a rare breaking of kayfabe.

Kayfabe, purportedly a pig Latin word for ‘fake’, is the code of conduct among professional wrestlers that insists plots are adhered to, characters are constant and storylines are enacted with the utmost conviction. WWE (formerly WWF until it was forced to submit to the furry legalistic grip of the World Wildlife Foundation, who claimed dibs on the acronym) is masterful at keeping its kayfabe straight. When wrestlers are actually injured, those injuries are worked into a character’s storyline. When one wrestler has a real affair with another’s wife, that feud reverberates onto the stage. Rather like a match itself, in which the ropes form a token barrier to the outside world, reality occasionally leaps in, and the action occasionally spills out. The Benoit murders, however, were more than an injury that could be ‘worked’. Benoit, nicknamed the Canadian Crippler after accidentally breaking the neck of a fellow wrestler early in his career, was a ‘face’ (short for ‘babyface’, a good guy) as opposed to a ‘heel’ (bad guy). He had won the championship belt in 2004 to great acclaim. That he should now prove to be a real-life double-murderer thoroughly confounded the audience’s expectations.

Roland Barthes, whose Mythologies (1957) revealed professional wrestling to be a semiosis in which wrestlers and audience collaborated, would have realized the problem. Much more importunate than the logical impracticality that Benoit caused – the fact that McMahon was forced to revive his character in untimely fashion – was the moral confusion caused by a good guy gone so irretrievably bad. ‘The perfect intelligibility of reality’ that Barthes saw professional wrestling as providing had been radically obscured. So shocking were Benoit’s actions, and so thick the rumours of him suffering from steroid-induced rages, that the American Congress immediately launched an investigation into the WWE. This was dangerous. Pro wrestling cannot bear very much reality.

Few had much sympathy for McMahon. He was, after all, responsible for one of the most infamous breakings of kayfabe, known in wrestling lore as the Montreal Screwjob. In 1997 McMahon had organized a farewell match for the defending champion, Bret ‘The Hitman’ Hart. Hart was leaving the then WWF for its rival, World Championship Wrestling, and had asked to win his final match in his homeland of Canada. But McMahon disliked the idea of Hart leaving his organization for a competitor and thus devised a secretive change to the match’s predetermined finish. As Hart’s rival, Shawn Michaels, held Hart in the Sharpshooter Submission hold (Hart’s own signature finishing move), McMahon ordered the bell to be rung early, before Hart could kick free as planned. So it was that Hart lost his championship to his own move in front of his home crowd. In fixing an already fixed match, McMahon displayed a kind of Mephistophelean genius.
This real-life piece of skulduggery had been brilliantly subsumed into the WWE’s kayfabe history, with McMahon harnessing fan revulsion and using it
to create a character of his own, ‘Mr McMahon’, an overbearing, authoritarian figure who regularly appeared on stage to shout coarse insults at the wrestlers. Could McMahon now work a similar reversal and tear the WWE away from a real storyline of congressional investigation and steroid abuse?

As it was, the next time McMahon appeared on air there was no more talk of Benoit. Instead he ranted and raved about the investigation into the WWE by Congress, as though it was just another absurd plot device thought up by his writers. Not only did this act as a replacement for the now unviable car bomb storyline, but it brilliantly shrunk the investigation’s seriousness. It became part of the slapstick. To top things off, McMahon was served with a paternity suit in the ring. Amid this ridiculous turn of events Benoit’s death was quite forgotten. McMahon was the heel once more. ‘I cannot be intimidated by Congress,’ shouted a ‘shocked’ McMahon, ‘I cannot be intimidated by the media. I cannot be intimidated by someone who should have been … on the pill!’ Kayfabe had been brilliantly restored. In this dramatically clumsy yet morally successful reversal, unfamiliar exterior threats had been absorbed into familiar kayfabe ones, and the audience was blinded to the Benoit tragedy through sheer narrative excess. What’s more, a pleasing symmetry was displayed in replacing the story of Benoit’s death with that of a birth, albeit one born out of the ‘orgy of evil’ that Barthes recognized as essential for all good wrestling.