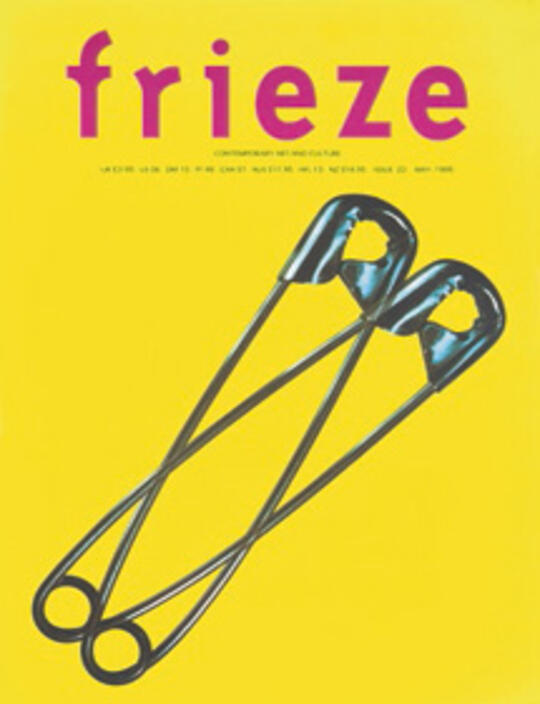 As I once noted in these very pages, the mid-career retrospective is an odd thing, almost a premature burial. I have since revised my opinion: the mid-career retrospective partakes of far more ancient practices concerning the proper disposal of the dead. The corpse is simply tossed out upon a dry rock as carrion for attendant vultures and jackals. Stripping the skin, gorging themselves on the entrails, gnawing the remaining bones ­ they enjoy a lovely supper.

Anticipating the deluge of hype that would undoubtedly attend Ross Bleckner's retrospective, many observers 'worried' that Felix Gonzalez-Torres' show would get lost in the shuffle. Gonzalez-Torres may in fact benefit from the Bleckner media blitz, albeit in a back-handed way. His art remains tailor-made for the art crowd, who may applaud him simply for the discreet, minimal 'intelligent' look of his works. Bleckner, on the other hand, is bound to catch brickbats from observers who are irritated by and/or envious of his prominence in the gossip columns.

The Guggenheim 'gay curation' of simultaneous Bleckner and Gonzalez-Torres shows raises any number of interesting questions: the generational divide (Bleckner is 46, Gonzalez-Torres a decade younger); recrudescent painting versus neo-Conceptualism; the fetishised art object par excellence ­ easel painting ­ versus seemingly (but deceptively) ephemeral 'process' works. Each body of work also represents a contrary approach to the social issues which have been interpreted as the cruxes of their respective oeuvres. Whereas Bleckner's 'AIDS paintings' are assimilated to earlier forms of memorial art and architecture, Gonzalez-Torres' public billboards and stacks of poster-like sheets of paper recall Gran Fury and the halcyon days of AIDS activism. Bleckner is confined to the old-fashioned role of seigneurial artist dispensing bounty to worthy causes; Gonzalez-Torres still enjoys a whiff of Situationist transgression.

At the grand opening of the Frank Lloyd Wright Gay Bar, unseemly crowds pullulated in Wright's vortical Pantheon, now a thriving nest of made-up, dressed up, jumped-up termites. And who were these people? Well, there certainly were a lot of fags. Muscle queens, interior decorators, club kids... you name it, the gay community turned out in force to celebrate these two kindred souls.

The Guggenheim's notoriously inhospitable space accommodated the works of Gonzalez-Torres well: this is probably as good as these pieces will ever look. The biggest hit had to be the artist's 'spills' and 'carpets' of hard candies and bubble-gum. The cellophane-wrapped, oblong black liquorice candies of Untitled (Public Opinion), (1991) reminded me of poppers, prompting a rechristening: 'Untitled (Amyl Nitrate).' Little signs were posted beside each of these mutable pieces, advising museum visitors to take one but not to consume it until outside the Guggenheim's precincts. I imagined these orders to have come down from the Museum's legal department. After all, what would have happened if someone bit into one and chipped a tooth or, worse yet, choked and died. Actually, it turns out that the signs were Gonzalez-Torres' idea: he didn't want to see a masterpiece of modern architecture defaced with masticated gum ­ but that is, in fact, exactly what happened.

Ascending to the ambiguously spiritual empyrean of Bleckner's show, I was rather taken aback by its enormous size: 268 paintings and drawings. What is this, the Matisse retrospective? The show could have been edited by a third and displayed the painter to far greater advantage. Yes, there are many beautiful paintings, such as The Forest (1981), with its glowing nimbus shining through the phosphorescent cage of stripes; Whistlerian nocturnes like Delaware (1983), and God Won't Come (1983); and the stencilled lazuline diamonds of Invisible Heavens (1993). Then there are the AIDS memorial paintings, many of which push Bleckner's melancholic reveries into the grim territory of socialkitsch. Some of Bleckner's titles are just too much: otherwise attractive 'cell' paintings bear ridiculous titles like Internal Medicine (1991), and Clinical Trial (1993). Might I suggest alternative monikers? How about 'I'm on the Board of CRIA (Number II)' and 'I Bought Truman Capote's Old House in Sagaponack and Threw a Fabulous AIDS Benefit There with Kelly Klein (Number IV)'. The exhibition's nadir is perhaps the painting One Day Fever (1986), which features what appears to be a pair of L'Eggs pantyhose wafting heavenward.

Maybe it would be helpful to regard Bleckner's career in terms of microcosm and macrocosm. Under the former aegis, we can include numerous beautiful and suggestive paintings. Bleckner has done enough very good work to assure him some sort of lasting posterity. Macrocosmically, we run into problems, since the whole of Bleckner's career has been recast in light of the AIDS paintings. Early stripe paintings that belonged to the discourse of simulation and which parodically alluded to Bridget Riley's art have been retrospectively conscripted to the AIDS/gay cause. The example of Peter Halley's contemporaneous 'Prison' paintings could have once encouraged an analogous reading of Bleckner's stripes. Now, however, these paintings are read as allegories of gay oppression: the prison is the closet, homo-phobia, internalised self-hatred, etc. The Guggenheim's curators and catalogue essayists have attempted to sew up Bleckner's career into a tidy satchel, but it's my bet that it will be in its inconsistencies and elisions that Bleckner's painting will prove to be of lasting interest.

So strange: Ross Bleckner's questionable paintings give me something that most contemporary art ­ even and especially the contemporary art I like best ­ doesn't. Staring at these black-varnished, emblem-cluttered canvases, I feel a frisson of (you won't believe me) Proustian mémoire involontaire. Suddenly, a quarter century has not elapsed, and, seven years old, I kneel before the big black-lacquered credenza in my grandmother's living room. Already, my child-eyes are possibly no longer so innocent, as the first evidence of an interior-decoration tapeworm stirs in my gut. I gently run my little fingers, that moments before were set hard upon practising Für Elise, over the shiny, slick surfaces; I don't want to leave any deforming smudges. The credenza is 'richly' ornamented with figures of demented chinoiserie: ladies of the Emperor's court attired in proto-Issey Miyake cocoons; gilt pagodas; clusters of red, yellow, and blue flowers, like miniaturised Redon bouquets. Birds of no earthly species fly through the black skies.