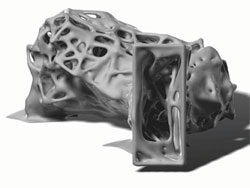 François Roche and Stéphanie Lavaux founded the architectural agency R&Sie(n) – read ‘heresy’ – in Paris in 1993. Their practice emanates from a critical reflection on the relationship between their discipline and its context, and belongs as much to the fine arts as to architecture. The exhibition ‘I’ve heard about...© (a flat, fat, growing urban experiment)’ is conceived as an installation, comprising a prototype city co-designed by R&Sie(n) and a number of specialists in other fields, including mathematicians, sound engineers, furniture and landscape designers, biologists, Freudian psychiatrists, singers, science fiction writers and even hypnotists. Rather than being a conventional presentation of architectural models and plans, the show is an introduction to an original and speculative approach to urban planning.

For R&Sie(n) every building must be inspired by its environment. They use climatic, topographic or organic data as their primary tools in elaborating a structure’s shape and function in purely logical form. The exhibition begins with a straightforward question: is it possible to conceive of urban structures capable of reacting to human contingencies? The museum gave R&Sie(n), in collaboration with the Laboratory for Robotics of the University of Southern California, the chance to develop a machine called the VIAB (taken from the terms ‘viability’ and ‘variability’), which is a regenerative structure shaped like a stick insect. The VIAB is controlled by a computer that simultaneously determines and organizes the building’s parameters (as algorithms) and secretes the construction material – an organic-looking spongy substance similar to coral. Through this process the traditional working/joining stage of construction is no longer necessary and can be replaced by a ‘secreting/smoothing’ phase. The dozen prototype models, as well as the diagrams, videos and texts presented in the exhibition, reveal the possibilities offered by this machine: with the VIAB a building can be conceived and created in real time, and the process of planning and anticipation, inherited from the Renaissance, done away with completely. R&Sie(n) believe that this process of predetermination implies hierarchy and control, and that therefore the city must be conceived and realized simultaneously, in relation to its surroundings, through negotiation among all parties involved. Nothing can remain fixed; everything must evolve continuously. The architects’ theoretical models are the disorganized but bustling cities of South Asia: urban constructions developed like complex tree structures that remain negotiable and develop in relation to individual and common desires and energies as well as collective constraints. No need for a tabula rasa: the ‘new architecture’ grafts itself onto the existing city in the same way the exhibition deliberately squats the architectural structure of the museum that had been installed as part of Rirkrit Tiravanija’s retrospective earlier this year.

Every element in the show is a tool for individual and collective transformation. The architects seek to transform our perception of the spaces we inhabit and that psychologically inhabit us. To this end the exhibition is conceived as a sort of hypnotic chamber in which the visitor is exposed to a variety of stimuli. The resulting information can then be used by the VIAB to generate architecture; the stress felt by an individual, for instance, can be integrated to act as a virus disturbing the elementary data. A feeling of anxiety running through the show is produced by elements such as a video showing a strange girl who looks fixedly at the visitor, combined with various sounds and voices. The atmosphere becomes more sensual in the ‘immersion room’, an alveolar protuberance where visitors can sit in one of the five cells and listen to François Roustang, Jacques Lacan’s hypnotist.

Physical architecture is now inseparable from the architecture of information (computer programming), suggesting potential political opportunities in the slippage between buildings and databases. This is precisely where R&Sie(n) operate. For them the city’s dysfunctions and its chaotic mechanisms make it possible to imagine another articulation of architecture and the creation of new aesthetics and functions. By using logarithms and new technologies they take the notion of ‘tree structure’ a step further and devise architectural scenarios through the exploration of ideas about architecture and the ‘heterarchy’ theory – a system in which multiple dynamic power structures determine its actions. Far from being a hypothesis, the proposal heralds the disappearance of the architect as ‘planner’ altogether and the advent of a collective, co-operative architecture. The exhibition offers a physical experience that actually facilitates the understanding of this complex project and presents R&Sie(n) as one of the most radical architectural agencies working today.