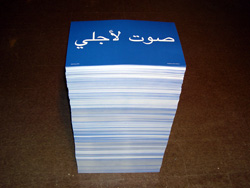 When you title an exhibition after the ramblings of a deranged schizophrenic convinced that Russian clones are controlling the government, and that a disease spread by cannibals is flooding the nation, and that a ‘Ruby Satellite’ that manipulates time may be the last best hope in defeating these cannibals and clones – well, you’ve got a tall order already. The sad, real-life denouement of this bizarre tale is that two Capitol police officers (mistaken for cannibals) were fatally shot by Russell Eugene Weston Jr. in 1998 as he stormed the United States Senate in search of the controls to said satellite. As crazy as this story is, it does contain all the elements of what this exhibition, curated by Ciara Ennis, was all about: compulsion and power – how they are played out and how we navigate the spaces in between.

Since the fall of Gotham’s tallest towers, fear has rained down on us like candy from a mammoth post-9/11 piñata. This fear informs some of the works in this exhibition, including Marc Bijl’s The Party is Over (2004), a gathering of inflated plastic letters spelling out the word ‘TERROR’, replete with streamers descending to a confetti-strewn floor. While its pithy if glib comment left one feeling underwhelmed, it dawned on me that Bijl exactly captured how the ennui-of-the-day feels. The word has been overused for so many dubious goals, so many ill-gotten gains, that not only has its meaning drained away but it has been irrevocably cheapened.

The flipside of this work is Democracy (2004) by the Chicago-based collective Industry of the Ordinary. Stacks of royal blue placards emblazoned with the words ‘Vote for Me’ in Arabic script at once merges Felix Gonzalez-Torres’ participatory minimal sculptures with the gee-whiz boosterism of an American election. Democracy works in two ways: if viewed in the Arab world, this American jingoism reads as yet another encroachment; and the Arabic strikes dread anywhere across the United States because of its ‘illegible’ otherness – we always fear whatever we do not know (or what we simply cannot read). Somewhere in the middle lies the hope that its sentiments could be genuinely heard.

There is a slight twinge of nostalgia for the old-fashioned fears and comforts of the Cold War in Christine Tarkowski’s Anti Tank Obstacle (2006). Built out of cardboard and scattered around the galleries, they wouldn’t stop a Volkswagen, let alone a tank, and looked more like large maquettes for bad heroic public monuments. Their absurdly flimsy construction also points to the equally absurd notion of how removed we in the West have become from the very idea of tanks rolling through ‘our’ streets, as our wars are progressively played out on other nations’ turf. This distance of memory is echoed in Adam McEwen’s Untitled (A-Line) (2002), which simply crops and inverts a famous photograph of Mussolini and his mistress taken just after they were hanged. Flipped upwards, they now both look as if they have thrown their arms in the air. We are so detached historically that it takes a moment to realize the brutality before us, which strikes us as sad and pathetic, even for a fascist dictator.

Faced with all these works based on the dramatics of politics and Realpolitik, what is left for us to do? We can try out a life of crime, courtesy of Janice Kerbel’s charming work Bank Job (1999), for which the artist meticulously figured out a workable plan for a heist. Like a professional, she cased the joint for 18 months, developing maps, plans, even an escape route. Another option is just to give up, as in Matthew Wilson’s Surrender Office (2004), a series of private performances where people confessed to the artist their fears and wishes. A black and white photograph documenting the act, with the artist holding a 15-foot white flag, speaks volumes more than the actual cathartic act. The symbolism of capitulation is not seen enough today and looks surprisingly powerful in its simplicity and humble dignity.

Some of the works shown here succeeded, others did not, but all at least attempted to create some sense out of the more maddening and contradictory facets of the world we’ve got. Rather than retreating into formal or theoretical concerns about art, these works do the harder job of working with messier realities. As psychotic as Weston was, he just wanted to save the country, and in his bravery and his fear he thought he alone could accomplish the task. His heart was in the right place, which is maybe where the ‘Ruby Satellite’ was all along.