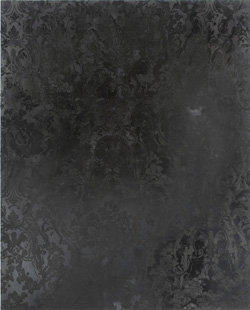 Rudolf Stingel has made a career dancing around the idea of painting. He skirts its authority by looking at its components, its physical identity, its visual language and its history. Representation, abstraction, process, pattern, performance, subjectivity and the audience are all his subjects. Yet Stingel never really paints. It is not that he can’t make paintings; he simply chooses not to accept the tautological definitions of the language.

Many of Stingel’s supporters, including the exhibition’s curator, Francesco Bonami, view the artist's relationship to painting as challenging, but never to the point of critique. According to Bonami, Stingel’s writ-large gestures ‘redefine what painting can be, what it has been, and what it is’. But, conversely, he is at his best when he is giving us what painting is not. Parsed, divided and distilled, his works isolate the language’s vocabulary and grammar, leaving the viewer with both inert and volatile matter. Whether rudimentary in form or exercises in Conceptual inquiry, his works are never without composure and elegance while always adding up to something more than intellectual game-playing.

Lining the MCA’s atrium with aluminium-faced insulation foam and suspending an ornate eight-foot-diameter chandelier overhead, Stingel transforms the public space of the museum lobby into a glittering hall for the élite. This site-specific grandeur is the foreword to his 20-year survey show. The table quickly turns, as this welcoming hall becomes instead a graffiti-scrawled vault. Viewers are welcome to scratch into the soft foam-lined walls, and a dense cacophony of text and doodles becomes an encyclopaedia of populism. This whole affair is titled Untitled (2007).

Reinstalling the bright orange carpet that covered a lobby space in a previous Bonami exhibition, ‘Universal Experience: Art Life and the Tourist’s Eye’ at the MCA (2005) in an im-pressive volume of official exhibition space was arresting. The looming white walls of the gallery hold only reflective colour, while the glowing carpet indexed the traffic patterns of museum visitors. If colour, texture and mark are the things of painting, then so they are of interior design. Untitled (1991/2007) is another carpet piece, but this time it is assuming a proper painting location, hanging taut on the wall, where viewers can trace their fingers in the ply of the large shag rectangle. But unlike the aluminium foam into which viewers scratch their phone numbers, initials and favourite band names, the carpet drawings can be smoothed away by another visitor, bringing the power of erasure to this domestic field.

Stingel’s pink and white polystyrene works are over-represented in this exhibition. Although they underscore material processes, pattern constructions and performative gestures, these enormous pieces are slight in compositional interest. His ‘how-to’ paintings, made of more traditional materials, are much more complex in their illusionism, spatial play and surface tension than the foam works. Equally large, these works protract the elements of picture-making while also challenging authorship and originality, whereas the polystyrene paintings seem only to evoke material comedies.
Stingel gives representation its own gallery. Engulfing portrait paintings of the artist in cinematic poses commingle with classical compositions. Dating from 2006, these five grisaille paintings show a brooding, aged man assuming introspective and self-absorbed mannerisms. The photographic verisimilitude of these works trumps the seduction of the medium. They are mechanical-looking in their execution and lay no claims to impressive technical prowess. In these works Stingel exploits the subjective tropes inherent in the genre of self-portraiture while never inviting the charge of realism.

Stingel’s untitled cast-bronze Untitled (1994–6) is the weakest work in this exhibition. Each of this Buddha figure’s six arms holds a tool from his how-to Instructions (1989), in which the artist details the step-by-step process required to create one of his early abstract paintings. A tube of paint, an electric hand-mixer, a pair of scissors, a paintbrush and a set of instructions are the ironic ‘path’ to painting. Admittedly, irony and critique had to be part of the equation for painters in the 1980s. Today such an approach appears immature, whereas the paintings made from the Buddha’s tools look vital and compelling. And like the Buddha, Stingel too holds many notions concerning the processes of art-making around him, and the artist’s Conceptual practice keeps his language honest.