Lisette Lagnado is Chief Curator of the 27th San Paulo Biennial which will open in October, 2006. Lagnado’s pioneering approach to the work of Hélio Oiticica will be incorporated into the framework of the Biennial, which is titled ‘Borderless Blocks’ 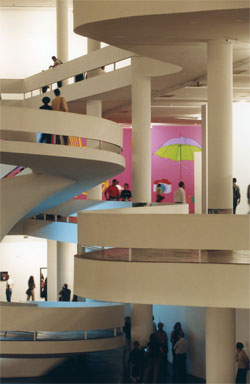 James Trainor: When you were appointed Chief Curator of the 27th Biennial of the San Paulo, what was the first thing you wanted to change?

Lisette Lagnado: I proposed an end to the so-called national representations. This is an obsolete system for an exhibition of international calibre, especially in San Paulo, and is an insult to the organic lines of Oscar Niemeyer’s building. Furthermore, in socio-political terms, the large migrations of the 20th century have diluted the notion of a national identity without cultural miscegenation. In other big, international exhibitions, for example, Meschac Gaba has represented the Netherlands, Mona Hatoum, the United Kingdom, and Anri Sala, France. The concept of ‘national representations’ is, in my view, something that belittles artists, and tends to highlight richer countries while smacking of benevolence to the poorer countries. We are born in one city, assimilate into another culture, get married in yet another country and sometimes even die elsewhere. Although the structure of the show might follow the two main blocks, ‘construction projects’ and ‘living projects’, it will not have any divisions, either by countries or by aesthetic categories. To do so, would also be to betray the programme of Hélio Oiticica who, when participating in the show ‘Information’ at the Museum of Modern Art in New York, made it very clear that he was not there to represent any country or nationality. And that was 35 years ago! The structure of the San Paulo Biennial, or rather, the flow between the works, will be determined by the affinities between them, thus constructing a kind of spatial narrative. If possible, the work of more ‘historical’ artists will not be placed alongside that of his or her contemporaries, but rather juxtaposed with something more contemporary. My project includes dead artists, the presence of whom will determine the topicality of questions asked decades earlier. This does not mean that the San Paulo Biennial will have a series of ‘historical rooms’, but rather that it will place work ‘in context’. Many of its concerns will relate to the local audience.

JT: When I first spoke with you recently, you were in New Zealand. Was this part of a research trip? Generally, what kind of research process do you think is most appropriate for the Biennial?

LL: In November I was in Australia and New Zealand at the invitation of their consulates. As soon as the ‘end of the national representations’ was announced, some misgivings were inevitably expressed on the part of some countries. I want to make it abundantly clear that we can work with short-lists of artists, suggested both by the countries and by the curators, while still relying on the conceptual framework of the show. In the case of some countries, about which we know little or for which we would need to bring ourselves up to date, we go on research trips. I believe this method to be the best process for the selection of a biennial; the curator can get in touch with the local reality, gauge the temperature of the art scene and talk in person with the artists. The only impediment is the lack of time for more in-depth research, but we’re not making selections by means of catalogues; it is a task involving continuous prospecting. Also we should never forget that established artists in, say, Europe do not always correspond to the names that the Brazilian public are familiar with. Ultimately, the big question is: who is the San Paulo Biennial for?

JT: Your approach to the themes and structure of the next Biennial has been influenced by the work and ideas of Oiticica, whose writings and archives you were instrumental in making available online. How are his artistic concepts applicable to a large international exhibition?

LL: Correction: I intend to test out the concepts of Oiticica, not apply them to an international exhibition. When an artist like Rirkrit Tiravanija becomes famous for stirring up the public from an everyday action – cooking – this refers directly to the Parangolé Museum area and Creleisure. The written archives of Oiticica have never been properly studied. Only someone who immerses themselves in these thousands of pages will discover, for example, that he knew Gordon Matta-Clark. On the basis of this information, a universe opens up in respect to Oiticica’s ideas of transforming the urban landscape, when he returned from New York to Rio de Janeiro and dedicated himself to working on the ‘Ready Constructible’ and ‘Topological Ready-Made Landscape’ series, or took home a piece of asphalt he found in the rubble of Avenida Presidente Vargas. ‘Devolver a terra a terra’ (‘returning the land to the land’) consists of bringing the land of one place to another, using a quadrangular format which, in turn, echoes an inspiration of Oiticica’s: Kasimir Malevich.

JT: You are working with a curatorial team that includes Adriano Pedrosa, Cristina Freire, José Roca, Rosa Martinez and guest curator Jochen Volz. How does this co-operative structure differ from the model of past biennials, and how will it affect your scope and programme or the kinds of art and artists you are looking at?

LL: In the invitation I received from the Biennial Foundation they requested a team of ‘assistant curators’. Unfortunately I was not able to obtain for them the title ‘associate curator’, which would have implied a more balanced partnership. Our working structure is co-operative by nature. I wanted the team to be composed both of specialists in international exhibitions and of scholars or researchers with experience elsewhere, who could contribute with different varieties of reflection and criticism. This diversity is already manifesting itself in the kinds of suggestions each one of them is making.

JT: Biennials are proliferating exponentially all over the world. Do you think this shifting reality introduces new pressures on San Paulo, which is the second oldest biennial in the world?

LL: Yes, the proliferation of biennials worldwide puts us under renewed pressure to reconsider the role of our Biennial and also corresponds to the need for us to introduce new names. Due to the geographical distance of Brazil, curators here must take into account the fact that visitors to the San Paulo Biennial (around one million, 75% of which are local/national visitors) probably did not go to Istanbul, Berlin or Sydney, for example. But the people who write the definitive reviews regarding the success or failure of the San Paulo Biennial are the international press. And they, at least, understand the need to present an artist like Matta-Clark in Brazil for the first time. This Biennial is about doing things we’ve never done before, but it isn’t doing them because of Berlin, Beijing or Tirana. The implementation of artistic residences in Brazil and the launch of international seminars starting in January, expanding both the geographical space of the Biennial (the city of San Paulo) and its temporal space (one year instead of two and a half months) are also mini-revolutions to be taken into consideration in the overall evaluation.

JT: Some biennials have been seen as driving a trans-national aesthetic. In contrast, your emphasis on Oiticica seems to suggest a distinctly homegrown starting point. What place is there in international surveys for specific ideas and objects that are less easily translatable?

LL: A project which emphasizes the theoretical and practical processes of an artist such as Oiticica corresponds, without doubt, to a ‘constructive will’, to use his expression. This means creating history from within our own position of relevance and not inventing it from the outside. It is possible to ‘translate’ Oiticica’s environmental programme into other political situations, provided that this ‘translation’ is presented as a free exercise and not an attempt to illustrate already established theories. However, we must remain clear about the fact that there are few artists in the mould of Oiticica, or rather, artists who share this visionary aspect, which I intend to explore. The extent and nature of what he planned, but was never realized, constitutes the agenda of many artists today.