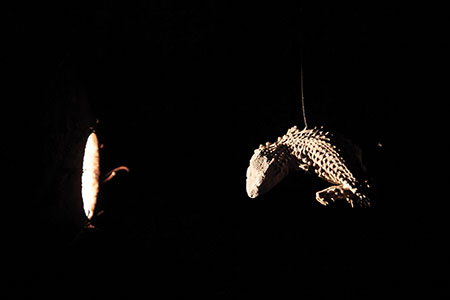 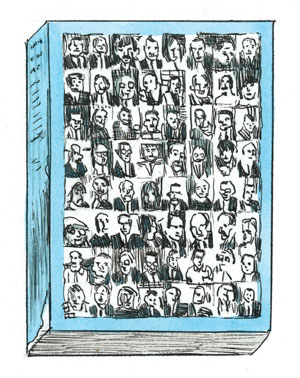 In the mid-1990s, Sancho Silva started to create installations that often took the shape of wooden corridors, tunnels and rooms, equipped with optical devices such as windows, slits, pinholes, periscopes and binoculars. Made to be physically traversed and inhabited by visitors, often one at a time, these context-specific alterations explored the way the gaze is framed, organized and possibly manipulated.

From the early 2000s, the Portuguese artist started to more explicitly employ principles of institutional critique (somewhat in the vein of Michael Asher). Gazebo (2002), for example, Silva’s contribution to Manifesta 4, purposefully confused inside with outside, private with public: he built a box inside the exhibition space in such a way that one could not access it through the regular entrance for ticket-holders, but only through a side door open to any passers-by; thin slits in the box allowed them to peep into the otherwise empty space.

In recent years, Silva’s works have developed a more static and contemplative quality. With objects such as the soles of old shoes or a rusty fragment of a car body presented inside camera-obscura-like structures or cabinets, the boundary between the tangible materiality of an object and its construction by means of images and reproductions comes into focus. Silva’s solo show at Kunsthalle Lissabon can be interpreted as a further evolution in this direction. Instead of building new architectural and spatial devices, the artist simply darkened the exhibition space (originally an apartment located in the city centre). Here he presented an installation (Effigiae, 2012) comprising six pieces in the form of hanging objects and light projections, creating a coherent ambience, a theatrical constellation of vistas reminiscent of the cabinets for optical experiments in the Baroque age, although using mainly low-tech apparatus.

Upon entering, the visitor encountered two objects: under a stroboscopic light, a dried octopus was spinning next to a basket. Seen from a certain angle, the combination created the illusion that the octopus was still in the kind of basket that is normally used to catch it. The principle of bringing together two objects to form such a narrative plot continued: the shadow of a toad was projected onto the mould of a foot, and that of a dried gecko onto a stone, suggesting that the foot smashed the toad, and that the gecko was found under the stone. A thin hole in the wall, creating the effect of a camera obscura that projected the movement of the trees from the adjacent street onto a piece of cork, was the only work based on some kind of relation to the outside space. The most humorous combination in the room was created by superimposing two constantly moving images on the same wall: the shadow of a chicken leg merged with the shadow of the toad, suggesting the possibility of a new hybrid form.

‘I affirm, then,’ wrote the Roman poet and philosopher Lucretius in his book De Rerum Natura (On the Nature of Things, 50 BC), ‘that thin shapes and figures of objects are detached from those objects; from the surface, I mean, of their bodies; shapes which are to be designated, as it were, their pellicle or bark, because each image bears the likeness and form of that object, whatsoever it be, from whose surface it is detached and seems to wander through the air.’ Quoted at length in the press release accompanying the show, Lucretius’s materialist theory of images and simulacra had clearly prompted Silva literally to translate it into his work. If we think of how lightness, transportability and mutability are, for Lucretius, characteristic of the image, it becomes clear that this show constituted not only a humourous transposition of this theory but an appropropriate comment on the contemporary state of the image.