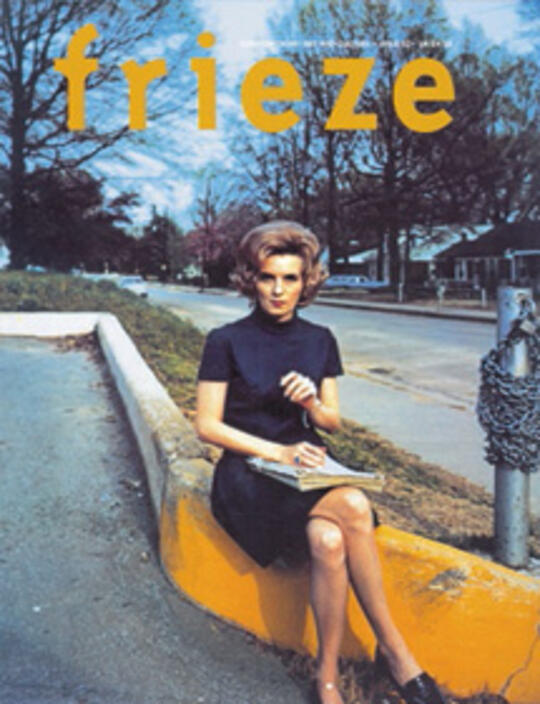 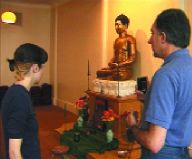 Sarah Tripp's video documentary Anti-Prophet (1999) uses an interview format to investigate the status of belief systems in contemporary Scotland. Opening with a shot of Glasgow spires beneath wet-cement clouds, the camera follows Tripp (a cross between an interviewer and pilgrim), as she travels through various communities, asking interviewees to nominate who they think might have something interesting to say about the subject. 24 people are gradually drawn out by her nervous, elliptical conversations and her question: 'what do you believe in?' Almost from the outset, the inquiry is a stumbling block - one respondent, for example, replies 'In what sense do you mean what do I believe?' Tripp doesn't solicit any particular answer, although she has a tendency to choose people who lean towards the 'spiritual'. Eventually, her interviewees express a broad range of belief systems - from Catholicism to Buddhism, Humanism, destiny, doubt, rebirth and immanence in nature.

Set up as a metaphorical journey of discovery, you get the feeling that Tripp is canvassing for reassurance about a spiritual location which, for her, is unoccupied. The look of the video is contingent upon where her subjects choose to be interviewed - usually in their homes or work-places. Cutaways of the artist moving between these locations, following a series of instructions she initiated, lends a subtle plot line to a usually depressing background of grey skies. Interludes, such as when she shelters from the rain beneath her umbrella in the lush grounds of a fortress-like convent, as if the small shelter has become a buttress against the vagaries of the universe, recall the Existential images of Caspar David Friedrich. Tripp's demeanour is contrasted with the security of the Carmelite nuns inside, warmed by radiators and wearing wimples, effusive in their belief that people need to believe. Their faith, they say, is substantial but not concrete, and they ascribe the falling rate of initiates joining the various orders to a wide-spread desire for answers that need no mystery.

The linguistic confusion about the difference between what is substantial and what is concrete gives an indication of the worth of this project. The great filmmaker, Albert Maysles, said that the documentary format would always beat a fictional film hands down - nothing, he said, is more engaging than the on-screen activities of real people. In Anti-Prophet there is a fascinating moment when the screen is filled with images of people thinking, before making utterances which are often quite shockingly meaningful, despite the fact that they are often couched in the dry, overly familiar language that is used to describe abstract ideas. Beyond quibbling about differences of opinion or 'grammarian pedantry', something dramatic seems to occur - a kind of grandeur about simply communicating what gives life meaning, or what armature of hope there might be at a time when all conventions are undergoing re-examination. The conversations that attempt to articulate heart-felt beliefs often feel like the wood around a hollow log. Within the context of the video, statements of belief do not have the ring of converting rhetoric, or the defensiveness inherent in faiths made vitreous by threat.

However, it is impossible not to see in the video a connection between eloquence and what is believed - the most expansive ideas are offered by people who have moved away from dogmatism, explaining that their decisions had been severely tested. It seems as if the difference between neural hardware and a transferable software had been negotiated, and that both had their own methods of overcoming the challenges of a lifetime of change and eventual death. At the other end of the scale was a schoolgirl who wants to know if she has a soul. Keen to believe in something that promises salvation, or which at least offers a continuation of what is, at this stage, a blossoming and hopeful life, she has realised that there are many faiths, and was sceptical about the possibility that that any one of them might hold the unique truth.