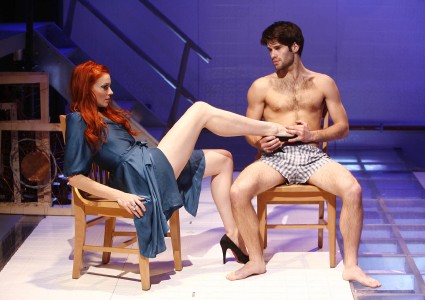 There is something awkward about the portrayal of artists on the theatrical stage. You feel they shouldn’t be there, out in the open like that. After all, artists are meant to work within white walls, not black boxes. Two mainstream attempts to dramatize the artist and the act of artistic creation for the stage have just opened in New York. The first is Artfuckers (2008), a new play by Michael Domitrovich; the second is a revival of Stephen Sondheim and James Lapine’s musical Sunday in the Park with George (1984). Both go a long way towards diagnosing the problems inherent in public displays of artistic creation.

Despite its title, Artfuckers is a shamelessly conventional play. A sculptor attempts to commit suicide after a bad review in Artforum. In his unconscious mind his four friends bicker and monologuize about their relationships. There is some simulated sex, a touch of nudity and lines such as ‘You are so provocative!’ and ‘Leave Miami in Miami’. Cultural touchstones are crowbarred into the script. ‘It means something to Dan Colen and Terence fucking Koh!’ screeches one character. At about this point you start looking for an exit.

Artfuckers attempts to satirize the art world through remarkably clichéd insights – artists are troubled, fashion designers are gay, young people are amoral. But while it fails to deliver any insight into process, or even art market politics, it does show that the art world milieu has become familiar enough to be a cliché, a sitcom backdrop, onto which one can peg a traditional play about relationships.

Sunday in the Park with George is much more ambitious. Taking as its central focus the creation of Georges Seurat’s Un dimanche après-midi à l’Île de la Grande Jatte (Sunday Afternoon on the Island of the Grande Jatte, 1884–6), the show manages, through an army of digital projectors, to turn the stage itself into Seurat’s canvas. But the portrayal of Seurat as a creative genius, perceived by others as a self-righteous snob – ‘Artists are bizarre, fixed, cold!’ sings the chorus – whose unswerving dedication to his muse alienates others, is stock mock artist.

The second half of the musical moves the singing to the 1980s and features Seurat’s great-grandson struggling to stay true to his muse amid the blandishments of the booming art market. The revelation in this half of the play – that successful art often springs from patronage and media hype – is as old as the hills, but it is at least presented in a jaunty manner (‘What’s a little cocktail conversation / If it’s going to get you your foundation / Leading to a prominent commission / And an exhibition in addition?’).

Both shows, with their adherence to such traditional concepts as the genius of the artist and the ineffable moment of inspiration, would make anyone even tangentially attached to the art world cringe, and would no doubt confirm any preconceptions about the inherently conservative nature of the theatre. Yet over the past decade a considerable number of plays have settled on the artist, or the art work, as their subject. Yasmina Reza’s hugely successful Art (1994) may have done more to popularize the popular dialogue about Conceptual art than any art show or opinion piece, but it did so through gently pandering to prejudice against it. On the other hand, a play such as Charles L. Mee’s genuinely inventive bobrauschenbergamerica (2001) tried to break the typical biographical format – and the plodding descriptions of artistic creation that usually accompany such plays – by summoning up the artist’s work through a collection of disconnected vignettes that quoted such performance pieces as Robert Rauschenberg’s Pelican (1963). But this was a notable exception to the rule. As Artfuckers and Sunday … show, when it comes to representations of art on the stage, nothing much has changed since Noel Coward’s comedy Design for Living (1932), with its depiction of the ‘divine decadence’ of starving artists in their Paris garrets.

The fact is that art is a recipe for the undramatic. The drama in the creation of painting – unless you’re Jackson Pollock – is internal and visual, not external and oral. Film is much more successful in portraying artistic production – witness Robert Altman’s Vincent and Theo (1990) or Peter Watkins’ Edvard Munch (1974), in which the viewer is allowed to see with the artist (or at least with what the director thinks the artist is seeing) rather than having it explained to them. It is an effect that Sunday … attempts to match by expanding Seurat’s painting to fill the stage, replacing the frame with the proscenium and forcing us to look.

Art and theatre may be sisterly arts, but they have never been close. While drama is a process, the revelation of character through action, most art does not unfold in linear time. Even when art takes the form of performance, its goal is to jolt the viewer into a fresh moment of perception, to make you aware of yourself and your encounter with the work. Plays – with the possible exception of those of Bertolt Brecht – seek to make you forget yourself. It is the difference between an ostensive art and a mimetic one.

Consider the extensive debates about whether performance art can be re-enacted or whether the original performance is an irretrievable moment. No one would have such a debate about a play, which is designed for frequent repetition. There are insuperable barriers between the two. As such, artists will continue to be stereotypes on stage, and the artistic process will continue to be a variant for the traditional dramatic concerns of love and hate. For an artist can never be what he or she really is on stage. But then who, apart from the actor, can?