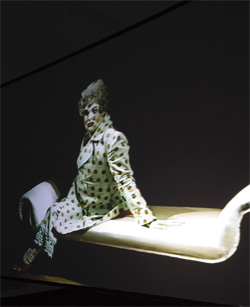 Perhaps the last person I expected to see at ‘The Secret Public: The Last Days of the British Underground 1978–1988’ was Margaret Thatcher. But there she was: a cold visual blast from the past, as composed as concrete and flanked by mean little bouquets. But morbid curiosity, and the sheer force of revulsion actually drew me into Richard Hamilton’s still-chilling Orwellian installation, Treatment Room (1983­–4), to lip read one of the former Prime Minister’s televised speeches from a monitor hung over an operating table. The curators of this show (Stefan Kalmár, Daniel Pies, Michael Bracewell and Ian White), which will soon travel to the ICA in London, obviously intended from the very outset to counter any dewy-eyed nostalgia that the mention of the ‘1980s’ or the ‘underground’ might evoke.

Rediscovering, reinventing and repackaging the now-cool recent past will never be straightforward. There is, for example, the tendency to kid yourself into believing that you would have been one of a handful present at an early Joy Division gig, and not at home on the sofa watching Coronation Street. The past is composed of artefacts and wildly varying accounts, and the difficulties in attempting to reconstruct it multiply if the subject is an ‘underground’; indeed, merely trying to define it arguably does it an injustice. Yet these days, when contemporary art is so successfully marketed to a wider audience than ever before, it seems like a timely, telling and worthwhile undertaking to conjure up and pull together some strands of British art-making that occurred before what became known as yBa fundamentally changed the landscapes of production, distribution and dissemination.

It would have been an impossible task to restage or encapsulate this entire period in one exhibition, particularly since all of the post-Punk, New Wave and New Romantic cultural action in clubs, music, fashion and films seemed to make little impression on the institutional and commercial arenas of the art world proper. The curators understandably decided to direct their viewfinder only toward works (with a couple of exceptions) that were intended as ‘art’ back then, and tried to focus on figures they ordained as relevant now. Here is the list of the participants: Charles Atlas, Bodymap, Leigh Bowery, Victor Burgin, Marc Camille Chaimowicz, Michael Clark, Duvet Brothers, Peter Doig, Gorilla Tapes, Brian Eno, Cerith Wyn Evans, Gilbert and George, Richard Hamilton, Derek Jarman, Isaac Julien, Tina Keane, Sandra Lahire, Linder, Stuart Marshall & Neil Bartlett, John Maybury, Neo-Naturists, Julian Opie, Jon Savage, Peter Saville, Mark E. Smith, Wolfgang Tillmans, Trojan, Stephen Willats and others. Normally I wouldn’t just list everyone, but it’s an auspicious cast and these names do, or should, speak volumes. The vast majority of them, however, were represented by transferred-to-DVD-copies of old tapes and films, though these were still great to see and worth the hours sitting like a goof with headphones on to hear. The stand-outs among them were Marshall and Bartlett’s Pedagogue (1988), a hysterically funny satire about Clause 28, which banned the promotion of homosexuality by local authorities, and the Atlas and Clark dance film Because We Must (1989), a prancing preening assault on high culture through the vocabulary of high camp. Actually, there were no bad videos and together the monitors bristled with anti-establishment esprit and media critique.

Documentation of Bowery’s fabled four days behind glass performed at the Antony d’Offay Gallery, London, (11–15 October 1988), had its own dark room commensurate with his stature. Now there was a being who could stare down normality, turning his audience into the zoo. Bowery manages to unnerve his voyeurs through a one-way mirror with the force of a succession of poses and stares. His delicate, full-costumed rolls on a chaise lounge are unforgettable. Elsewhere, documentation of the Neo-Naturists from 1980 to 1984 brought back to life this feminist collective of colourful promulgators of naked truth and mind-expanding body painting.

In the end, the sheer calibre of the art works in the exhibition won me over. Among the highlights were Willats’ housing estate documentary panels, The Kids Are in the Street (1984), Gilbert and George’s See (1987), one of their brighter-than-bright photographic grids that looks like windows for the church of post-hedonism, and Chaimowicz’s reconstructed projection room interior Here and There (1979/2006), an ensemble including a swinging pendulum and images of the artist at home examining his own reflection. Visual history can only ever be an interesting sketch, not a definitive summation (which would surely be a terrible thing anyway). When presented on home territory there is no doubt this show will seduce, repel and stir up debate. To sub-cultural survivors and partisans, those who perhaps know or remember differently, this might be an occasion to step up to the mike.