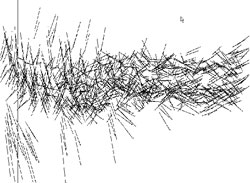 At the end of last year, in the windowless basement of a North London educational establishment, I heard the sound of the blackest ever black and listened to the shape of leaves, terrorist atrocities and kebabs. Tones the texture of grit ricocheted between 14 surrounding speakers, low rumbles bulldozed their way through bodies, whilst smoother high frequencies fluttered above our heads, clearing the air with elegant sonic vapour trails. Ears were subjected to thick barrages of swooping, bending, sandpaper-timbred noise, then left free to roam in open quiet spaces. At no point did I know which elements of the micro and macroscopic visual world were being parsed into sound. All I could see were the loudspeakers and drab beige walls of the studio space. And nor should I have known, for this was no exercise in dumbly literal sonic analogy; this was the synaesthesic result of Russell Haswell and Florian Hecker’s UPIC Diffusion Session #1.

Organized by David Bussel during his tenureship as curator of Cubitt Gallery, the event was the first presentation by artists and musicians Haswell and Hecker of an ongoing project utilizing material generated during their residency at CCMIX, (Centre for Composition of Music Iannis Xenakis) in Paris, using the unique UPIC system of sound synthesis. UPIC (Unité Polyagogique Informatique de CEMAMu) was conceived by Xenakis (the composer and electronic music pioneer who died in 2001) in collaboration with engineers and computer scientists at CEMAMu, the Centre d’Etudes de Mathématique et Automatique Musicales, also in Paris (and equally fond of confusing acronyms). Very basically, the system is made of a drawing tablet, the size of a large sheet of paper, which allows the user to make a direct sound composition using graphic elements. The tablet has vertical and horizontal axes – the former representing the character of sound produced, the latter controlling duration (represented as a left-to-right timeline). With an electronic pen, the user can ‘draw’ lines onto the board which are then directly translated into sound. The pitch and texture, or timbre, of a given sound is controlled by both the type of mark made – a single line is typically ‘smooth’ sounding, whilst many marks on a given page tend to have a ‘rougher’ quality – and what aspect of a sound the vertical axis is set to control: envelope, waveform, pitch or timbre. The parameters of duration can be controlled – you can set the scale of the horizontal axis to anything from minutes to fractions of a second.

Xenakis originally envisaged the system to have far reaching pedagogical and democratic implications for the role of music in people’s lives. By utilizing simple drawing methods, UPIC would do away with the need for people to have technical knowledge of musical notation and scoring, and allow them to engage directly with the question of what constitutes sound and music. Xenakis, an architect by training (he famously worked as Le Corbusier’s assistant) and fascinated in science and mathematics, was interested in the point at which programmatic systems meet ‘chance’, or ‘stochastic’ variables in the creation of music; he wrote ‘mathematics gives structures that are too regular and that are inferior to the demands of the ear and the intelligence’. ‘The great idea is to be able to introduce randomness in order to break up the periodicity of mathematical function … the hand stands between randomness and calculation. It is both an instrument of the mind – so close to the head – and an imperfect tool.’ Every house would have a UPIC machine and access to the means of creating complex new music – ‘anybody, even myself or you, or children, can draw lines or graphics.’ However, the first attempts to market the UPIC occurred at the same time as sampling technology emerged and caught people’s imaginations. Only seven machines were ever sold.

Xenakis himself wrote very little using UPIC (Mycenae Alpha in 1978 was the first piece ever composed entirely with the device), and Haswell and Hecker’s engagement with the project came from their belief that its potential has barely been tapped. Rather than concentrate on simple forms of mark-making and the sounds they produce, they experimented with different types of visual material – tracing onto the UPIC tablet images ranging from news photographs of disasters and atrocities, through depictions of the natural world to microscopic images of molecular structures (such as that which makes up ‘the blackest ever black’, a coating for telescopes that is purportedly the least reflective material on Earth). Despite the limitations of the system (it won’t, for example, allow a full circle to be drawn – a sound that occurs over time can’t, after all, travel back on itself), their research was in the spirit of stochastic exploration Xenakis advocated. Haswell and Hecker took the material they recorded at CCMIX and developed it for a diffusion system. No mere PA or surround sound set-up, a diffusion system is a multiple set of speakers that distribute sound through space, and allow for a high degree of real-time control over volume levels, equalization and, most importantly, spatial placement by the operator or performer at the mixing desk.

The audience at UPIC Diffusion Session #1 was never aware of the shapes or images used in its creation. Xenakis himself believed that audiences should not necessarily have to know about technical form in order to appreciate his work; Haswell and Hecker are similarly uninterested in instinctive analogical responses. Rather, the process of translation is key. If a sonogram – a technique by which a sound can be ‘scanned’ and represented as a visual waveform – can be taken of a diffusion session, would the initial image source still be legible? (Apparently, if you look at a sonogram of Aphex Twin’s Windowlicker from 2002 at a certain point Richard D. James’ grinning face appears in the wave pattern.) According to Haswell, their ideal audience member would be someone suffering from a particularly acute form of synaesthesia and thus able to hear a passage from a diffusion session and actually see, say, the leaf in front of them.

A good deal of current electronic music – especially within an art context – is moribund. The age-long desire for some kind of integrated music and art Gesamkunstwerk persists, but invariably most projects fall somewhere nearthe basic levels of Scanner’s drearily workaday samplings or the crassly literal art and Pop relationships flagged up by artists such as Christian Marclay. Electronica seems to signal little more than a fetish-ization of contemporaneity, technology and dance music subculture. Haswell and Hecker – both long associated with the more interesting outer limits of electronic music and installation – consider their re-engagement with this particular episode in postwar music history in the same way in which many artists have recently re-engaged with the Conceptual art practices of the 1970s; looking to Xenakis and Pierre Boulez rather than John Baldessari and Dan Graham. In their ‘UPIC Diffusion Sessions’, the historical importance of electronic music as part of the soundscape of life for the past 50-odd years is richly evident. The formal and conceptual properties of the project may be inseparable, but they also explore deeply human questions of how our senses apprehend and interpret the world. As Xenakis said, ‘the hand adds inner richness and charm’.