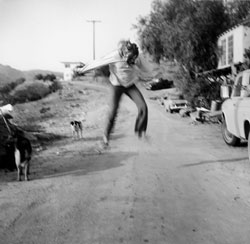 An untitled self-portrait taken in Wallace Berman’s Los Angeles studio in 1955 shows the artist posing before a framed copy of Henri Fantin-Latour’s painting Around the Table (1872), self-consciously pointing to his identification with the French artists and poets assembled there. Berman was a polymath and spark plug whose enthusiasms for Symbolist poetry, jazz, Surrealism and Dada were infectious among his social circle in the late 1950s. Removed by geographical distance from the critical culture that sustained (and then mortified) painting in New York, his California community instead admired and drew influence from earlier Romantic and transgressive avant-gardes in Europe. In North Beach and Topanga Canyon, familiar Modernist techniques – Dada-derived collage and photomontage especially – took on a new vitality.

Berman was that second-hand avant-garde’s doyen, publisher and mythographer, and his magazine Semina was its Documents. Semina was an unbound journal printed on a hand press in editions of a few hundred by Berman himself and mailed to friends ‘like a surprise communication from an erratic correspondent’. Each instalment of Semina consisted of loose-leaf pages of different sizes and shapes – the kind of alluring, inchoate ‘publication’ that doesn’t fit comfortably on a bookshelf. Over the course of its decade-long run (1955–64) Semina featured works by dozens of the artists and poets who passed through Berman’s bungalow on Crater Lane, a loosely defined scene that included Bruce Conner, Jay DeFeo, Jack Hirschman, Joan Brown, Jess, Allen Ginsberg, Diane di Prima, Dean Stockwell, Dennis Hopper, Taylor Mead, Jack Smith, Walter Hopps and many more.

Originally presented by the Santa Monica Museum of Art, Berkeley Art Museum’s ‘Semina Culture: Wallace Berman & His Circle’ drew together hundreds of artefacts made by 49 artists from Berman’s scene. A small cluster of works represented each one, often with Berman’s sometimes scandalous portraits mixed in. (His photograph of Jay DeFeo shows the artist with ass cheeks spread for the camera.)

Art works made in relatively conventional media – painting, drawing, sculpture and prints – showed varying results. Jay DeFeo’s monolithic black painting Temple (For W.B.) (1980) was dark and engrossing, as was Joan Brown’s scathed, mummified sculpture Man On Horseback (1957), but the market (and Expressionism) didn’t inspire their best work: John Altoon’s Portrait of a Spanish Poet (1954–9) is merely handsome. Semina artists were more at home with, and more creative in, marginal or ephemeral media. Posters, collages, meticulously decorated letters, postcards, books, doodles, weird druggy rants and stranger artefacts were interspersed among the biographical groupings and displayed in vitrines in the centre of the room. Dada, Surrealism, mysticism and pornography were the dominant influences; several seemed to be under the spell of Hannah Höch’s dense collages in particular.

But many of these objects seemed to shrug off the (Modernist) past altogether. Bruce Conner’s 1960 assemblage Generic Rat Hand Grenade, a small cracked egg shape in a pouch of translucent nylon, is an indefinably weird, a-sculptural thing – it looks as though it is about to crawl away. Cameron’s gouache and ink sketches of occult man-beasts (such as Hekas, Hskin etoz Beahi I, 1955) and fork-tongued succubi (Untitled, 1955) have a witchy, pornographic, medieval look. (‘Beware, you who read, that your will is firm and your heart is pure, otherwise this knowledge will destroy you,’ she scrawled dramatically on the end sheet of her sketchbook Abraxas, c. 1957.) Jess’ gorgeous, dense, esoteric collages imagine a place where medical diagrams, religious line-engravings and Krazy Kat comics intermingle – though intimations of the nuclear doomsday keep insinuating themselves into his ornamental dream world (Armageddon, 1960). This other-worldly spell is broken when modern stuff flashes into view, which happens often in Berman’s work: Tosh Berman, Wallace’s son, clutches a toy machine gun; Jack Ruby pulls a pistol to shoot Lee Harvey Oswald; riot police wave their batons; a hand presents a transistor radio.

A modest Semina disappeared amid this profusion of artefacts. So too did the art works’ biographical clusters stop the viewer from thinking too hard about what exactly these artists were up to and what the works might say to each other. What sort of work was all this cutting apart, fragmenting and rearranging aiming at? How did these artists imagine their present or their future? Can more be made of the circumstantial connections to Warhol’s circle, and to Pop? These historical questions and others were on Berman’s mind, even after Semina was through. ‘That Dada prizefighter never vanished,’ Berman wrote in 1968. ‘Like me he dug Romance, ’cuz without it there is no History, & without that there is only – let me see what’s that word – Logic or Death or something or other.’