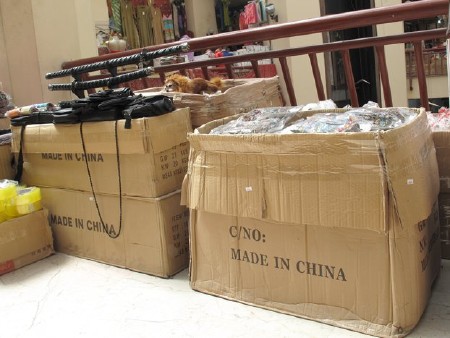 In 1934, charting the slums of Southampton for his travelogue English Journey, the Bradfordian writer J.B Priestley, a soft-socialist as traditional, boiled-cabbage, pipe-and-slippers as any writer of that era, stopped to deliver an infuriated blast against small-time shopping: ‘The small shop flourishes in this quarter, as it does in all such quarters. Even after you have given yourself the strongest dose of individualistic sentiment, it is hard to look at these small shops with anything but disgust or to find good reason why they should not be promptly abolished. They are slovenly, dirty and inefficient. They only spoil the goods they offer for sale, especially if those goods, as they usually are, happen to be foodstuffs. One large clean shed, a decent warehouse, would be better than these pitiful establishments with their fly-blown windows and dark reeking interiors and blowsy proprietors’.

In the 75 years since, the large clean sheds – which were, in Priestley’s day, usually found in the ‘progressive’ form of the Co-Ops – have become so dominant that nostalgia for the old marketplace is now commonplace, across the classes. Farmers’ markets for the concerned bourgeoisie, the commercial bustle of poverty and the longing for the petit-bourgeois joys of having to go to a grocer, butcher and various other establishments of a morning – all are increasing with every new Tesco’s. Some new malls, once the biggest and cleanest of sheds, are changing tack, with vast fibreglass hangars like Bluewater or Meadowhall being challenged by the privately-patrolled simulation of ‘diversity’ in Grosvenor’s ‘Mall without Walls’, Liverpool One.

This doesn’t mean that the supermarkets or malls are decreasing – far from it – but that they are becoming an ever more guilty pleasure. Bestselling books mourn the old world of individuated commerce and agitate for its revival. Carolyn Steel’s Hungry City (2008) was sustained propaganda on behalf of farmers’ markets in the guise of a history of the supply of food to the metropolis; while Paul Kingsnorth’s Real England (2008) exemplified sentimentality towards pre-supermarket shopping – a sentimentality which the author evidently does not hold towards mere human beings, as exhibited by a recent debate with Guardian columnist George Monbiot, in which Kingsnorth appeared entirely sanguine towards the mass death that would be the immediate consequence of the end of industrial civilisation.

From this brief sketch, the new-found love for the small and homemade would appear simply ideological, but there’s rather more going on here – while to merely cheer on the big sheds is to favour an outrageously destructive hyper-capitalism. FrenchMottershead’s ‘SHOPS’, an exhibition at Site Gallery, Sheffield, based on a three-year project, is informed by these mostly under-thought-out debates, although proves to be more sophisticated than the mere mourning of the friendly neighbourhood chiseller.

Rebecca French and Andrew Mottershead have spent several years travelling around the world in order to document shops: where they are; what they look like; who staffs and buys there; and the networks and conflicts which underpin them. Browsed through quickly, the first thing that you notice is a collection of picturesque images depicting (mostly) poor people, in a variety of down-at-heel settings: wan Finns carry shopping bags in front of tower blocks; a Turkish mother and daughter huddle, grinning, in front of similar high-rises; the young staff of a Guangzhou boutique alternately pout and smile; Norwich emo kids look as cockily, nervously cool as only teenagers can, and so forth. Most stand stiffly in front of the camera, as if in inadvertent tribute to August Sander.

This is all well and good, if edging into Priestley’s ‘doses of individualistic sentiment’ (and likewise the artists’ excitement at ‘informal commerce’). The other elements in the project – the dossiers, videos and assorted anecdotes spread across the space, not to mention a thoughtful blog – reveal something more complicated and insightful. So, far from being a story about local shops for local people, the internationalism of small-time trade is stressed.

Here a hat-seller in Sheffield turns out to buy from the same enormous wholesalers in Guangzhou that we come across elsewhere in the exhibition. Shops in Istanbul, Ljubljana, Norwich – all are subtly interconnected, in as global a system as that of the giant sheds (FrenchMottershead attempted, unsuccessfully but tellingly, to get access to a Romanian supermarket). ‘SHOPS’ illustrates well some of the neglected virtues of non-monopoly commerce, but ultimately a visit to one of their subjects, the 1960s shopping complex of Castle Market, a 15-minute walk from the gallery, makes the point as well if not better.

Here is the weirdness, the clashing aesthetics, the un-coerced friendliness, the complexity and the uniqueness which the more efficient sheds (with or without walls) have never been able to simulate. It is, of course, under threat of demolition.