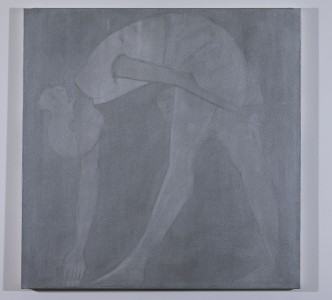 The horizontal-format paintings with their flurries of grey-green speckles are not easy to decipher, but the titles help: Sissinghurst (rain) and Garden (Sissinghurst) (all works 2007) point us towards the famous English garden in Kent, created by the Bloomsbury Group writer Vita Sackville-West, condensed into works of an intensely emotive yet muted palette. From a distance the densely worked surfaces resemble the smoothness of enamel. Yet the painterly experiment of London-based German artist Silke Otto-Knapp could have taken quite a different turn: after all, it’s not so far from garden landscapes, atmospheric light, tangled leaves and teeming meadows to the Impressionist ideal.
Otto-Knapp came to prominence as a painter of land- and cityscapes in which vegetation – rendered in heated colours and with an almost naive clarity – was rendered in a manner far removed from the often-clichéd illusionism of the landscape genre. The curator Anette Freudenberger has referred to these earlier works as ‘landscape interiors’: images that have lost their horizon and in which the space is often overgrown with bushes, trees and creepers like a cluttered stage. In their structured lushness they show vegetation as a dense atmospheric backdrop, nature as theatrical in its own right.

The focus of Otto-Knapp’s work has more recently shifted to the world of ballet and contemporary dance. However, while the paintings of Sissinghurst evoke a haze of damp air, the depictions of dancers, by contrast, contain no rustling tutus; with their rigid poses and sharply defined outlines, these figures are stylistically closer to those of Francis Picabia than of Pierre-Auguste Renoir. Figure (bending), for instance, leaves very little space for the bowed silhouette of the dancer; the painting’s square 80x80 cm format hugs the ballerina’s body so tightly that it looks like she is imprisoned within a tiny cell. In images such as Group (Les noces), clusters of dancers fuse to form dense, mosaic-like fields of entangled limbs; it’s inconceivable that any of them might detach themselves from the rigid composition of bodies.
Otto-Knapp is not just interested in tracing the dynamic, dramatic movements of dance and its atmospheric lighting and costumes, which seem to cry out for brush and palette. She has also studied the choreographies of modern ballets – including Checkmate (1937) by Ninette de Valois, as well as the Ballets Russes productions Les noces (1923) and Le train bleu (1924) by Bronislava Nijinska. The dusty-grey medium of photocopy reproductions of old images from ballets influenced the artist’s choice of colour for these intelligently selected motifs more than memories of evenings spent at the ballet. One has the impression of seeing film stills from vintage footage of classic modern ballets in the clearly delineated compositions, all of which shimmer gracefully between muted hues of midnight blue–black, grey and silvery white.

Painting in watercolour and gouache on canvas, Otto-Knapp often washes layers off her work before repainting over the residue. As a result, the surfaces of most of her images look very flat: gestural applications of paint and shadowy fields of colour float over the canvas without covering it or looking thickly applied. One work does differ in approach from the others, however: hanging on the back wall of the last room in the gallery, Present time exercises, one of the artist’s largest canvases, brings the exhibition to a close. The upper two thirds of the image are filled with pale silver circles, below which writhes a group of dancers. Although painted in the same shade of silver, the group is lit by the circles – circular spotlights – that shine straight out from the back of the stage towards the spectators, or in this case the viewer. Moving closer to the canvas, one notices the raised edges on the circular outlines of the spotlights. Here, Otto-Knapp has allowed the paint to build up until the pigment has begun to crinkle, leaving deposits like molten lead or scorched aluminium foil. The circular motif of the lights fuses with the physical properties of the paint itself to create a vast web – like a fabric inadvertently generated as the by-product of a chemical process – which spans the stage like a sky. Particularly when shown in the Rhineland, such a painting immediately brings to mind the work of the 1950s’ and ’60s’ Dusseldorf art collective ZERO: images created from metal and light, backlit perforations and burning bulbs. But these pictures, with their meticulously staged yet delicately muted beauty, will undoubtedly resonate far further afield.