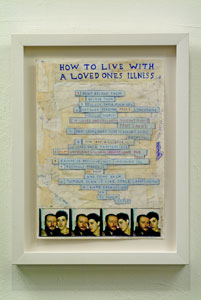 Certain books give the illusion that all the answers lie nestled within their covers. Encyclopaedias, atlases and religious texts cleave order from our frazzled world and claim to solve its riddles and deep meanings. Our lives, however, find that these words aren’t as cohesive and that meaning is far more elusive, disjointed and incredible than we imagine. The bridge that binds these two conflicting realities best is humour, and in his drawings Simon Evans depicts that wonderful gap between the words and life itself. The works in this show, splendidly titled ‘Humble Junkatarian Seeking White Frame’, are not so much collaged as cobbled together, with words written, scrawled, erased, carefully printed or affixed to paper, creating Joycean flights of language in tiny sentences, and with sickly wan coloured diagrams that are reminiscent of a fine, unabridged dictionary gone awry. We see the direct influence of illustrations that give life to the monochrome text of dictionaries, as in Untitled (Cosmologies) (2006), with the animal kingdoms organized in neat little boxes from sponges to stags, or Diagram of the Human Body (2007), where the circulatory system is but a lavender or pink direction. Arrows point towards select innards, but the information has been changed, for now the area within the skull says not ‘Brain’ but rather ‘Can Spoil a Nice View’. This occurs also in Switzerland (2006), where a map of Disneyland, retraced in red and blue ink, has the playful lands of childhood renamed as saltier adult places, including ‘Hell of Addiction’ or ‘Poor as Fuck’. Things are not neutral but serve more as a counterbalance to the ‘Happiest Place on Earth’.

When Evans sets his wry taxonomic focus on his own life and the insights he has gleaned, the work gains momentum. In 28 Years (2006) a summation of the artist’s life is played out against the diagram of the rings of a tree, carefully assembled from pencil shavings, tape and glue. We still have historical moments linked to specific rings, but instead of ‘Magna Carta Signed’ we now get ‘When I was five I got lost in a department store. I’ve been living there ever since.’ This cataloguing of ideas goes further in Evans’ campy lists, such as 10 Things I Know about Animals (2007), but it is in How To Live with a Loved Ones Illness (2007) that he finds the bitterness needed to make something sweet. Eleven suggestions are inscribed in the modest materials of ballpoint pen, correction fluid and tape, beginning pithily with the first tip: ‘Don’t believe them’ (followed directly by the second: ‘Believe them’). Eight entries below this we come across ‘Tumour Scan is like Space Camp. (Ha Ha)’: gallows humour born out of the need to laugh to stop the crying. At the bottom of the page a row of four photos of a couple made at a photo booth put a face to these jokes and inspire the genuine hope that everything turned out all right.

Untitled (Diary) (2007) is the ultimate list, with its recording of the artist’s prosaic moments rewritten in minute script of every colour, stretching out past arm’s length. In an era when many choose to keep their diaries open to anyone with a broadband connection and spare time Evans has left it all out for everyone to see, but the sprawl of rainbow sentences resist an easy read, with only snippets of words jumping out: fragments of his life, from ‘I make tea’ to ‘A bald American is talking’. All these strands come together for Untitled (As I Sail My Ship towards Death I Know These Things To Be True) (2007), in which we find a galleon, flying the cross of St George, beautifully rendered on the back of those very same medical illustrations gleaned from a textbook. Seeing the anatomical images bleed through from the other side lends an air of mortality to this work, but, with its hull carefully built of paper, this vessel speaks more of the classroom and the innocence of childhood. The ship, shown in cross-section, has its rigging and sails ready for a long journey. The question of what things are known to be true is still a mystery. But the earnest and gentle touch to this work makes you feel it is ready for whatever seas lie ahead.