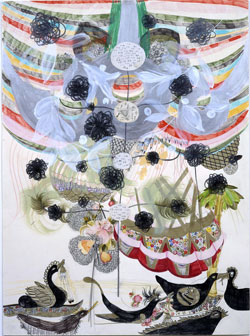 When I was in high school, Melrose Avenue was the spot to be dropped off at with friends to shop for vintage jeans and albums. Years later, Melrose’s associations remain lodged in the realm of entertainment and cash-and-carry retail – linked with TV soap operas, tourism and shopping. The location of Kantor/Feuer’s new gallery in the heart of Melrose was commensurate with New York artist Simone Shubuck’s first solo show in Los Angeles, which featured a generous offering of mixed-media drawings, all made in 2005.
Shubuck is consumed with popular culture and fashion, going so far as to name-drop designers in her titles: Reclining (Marni Socks and Necklace) or Bummed (Marni Shoes/Socks). The latter work pictures a contracted female figure posed in Egon Schiele mode, with head down, arms wrapped around her knees. Calligraphic lines delineating limbs and torso are offset by au courant wedge Mary Jane shoes, switch-grass-green knee-socks trimmed with royal blue bows, and crowned by an elaborate coiffure. This image, as well as Shubuck’s Ankle Strap, compositionally speaks to Schiele’s 1917 Reclining Woman with Green Stockings. In this way the pornographic precursors are reanimated with post-feminist wit.

Entering a gallery of hyper-fanciful drawings such as the all-over landscape scene of Spiderman Cookie Birds, wherein palettes and patterns lifted from contemporary textiles overtake the picture plane, one was accosted by a menagerie of birds, feathers and bobbles. It was difficult to accept that fashion footwear fantasies had migrated from the pages of glossy
magazines or the screens of eBay into the gallery with such an easy degree of playfulness. Yet Shubuck’s Klimtian sources (as in Klimt Blanket/Bird Bush, which was perhaps an attempt to use popular pin-up iconography with legitimizing art-historical references). seemed vulgar. Rainbows, eyes, masks, mosaic patterns, mandalas and spidermen form a hybrid iconography that evokes a sea of Pop-cultural and art-historical references. But to what ends? These drawings are animated, illustrative, expressionist, decorative, seductive, carnivalesque, but somehow resistant to conceptual complexity. There is an attempt at revisiting Aubrey Beardley’s illustrations for Salome (1894), Schiele’s eroticism and Elizabeth Peyton’s portraits via the pages of People, Us or OK magazine. One figurative drawing gives a shout out to Jay Z. The works recall Rem Koolhaas’ junkspace, in which the ‘iconography [is] 13 per cent Roman, 8 per cent Bauhaus, 7 per cent Disney (neck and neck), 3 per cent Art Nouveau, followed closely by Mayan’.

This show also brought to mind T.J. Clark on Jackson Pollock’s abstractions and the relationship between art and commodity culture. Clark’s discussion, in the light of Cecil Beaton’s 1951 Vogue photographs, which employed Pollock’s Autumn Rhythm (1950) as a backdrop for a fashion spread, pointed to the problematic Modernist tensions between kitsch and the avant-garde, of abstraction and decoration. Highlighting her preoccupation with ornament, Shubuck’s show was complemented by a one-day pre-holiday event of gift-wrapping in the gallery with paper in the style of her drawings. Her works on paper are, however, in line with those of many of her contemporaries. Odd Primitivist and Orientalist quotations aside, they seem to read as counterpoints to Kamrooz Aram’s exuberant landscapes exploring ‘the subjectivity of kitsch’. Shubuck’s world of fashion and fantasy also conjures Naomi Fischer’s femmes fatales or Lesley Vance and Charlene Liu’s phantasmagorical romanticism.

Curator Laura Hoptman, reflecting on the work of Laura Owens, for the 2002
New York MoMA exhibition ‘Drawing Now’, lamented a ‘prejudice against decoration […] in contemporary art’. An intolerance of ornamental whimsy is not what is at stake here, but rather a tilt away from a stock aesthetic of spectacle. The attractive and entertaining qualities of the work are evident, but their effectiveness is questionable. Who do these works speak to? The drawings aim to be powerful, seductive or luscious, yet they come across as thin, like paper dolls.