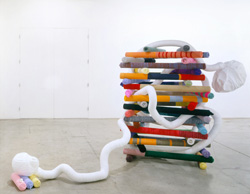 Siobhan Hapaska’s one-two punch of a show took a mordant, wide-ranging look at conquest and sublimation in manifestations both global and domestic. The six autonomous sculptures in this exhibition verged on becoming an installation, broadly linked by the interplay of rough and deli-cate, heavy and light, winner and loser. Shared materials – especially pelts, leather, wood and fibreglass – forged a common link, but Hapaska’s spatial control, her orchestral sense of timbre, gave the show its real wallop. The pieces seemed to reverberate at some level just under your skin. The artist’s self-admitted aversion to closures – ‘I like the gaps’ – keeps her ambitious topic from didacticism or sloganeering. And it’s never hokey. Less declarative than associative, Hapaska is unafraid of ambiguity or mystery.

She positioned Speaker (2006), a fibreglass ape perched atop a crate, in an unavoidable spot near the entryway. The figure was placed on a pedestal with four metal supports, the small ring at the foot of each one clad in a navy-blue sock. The docility of the figure brought to mind the Old World fascination for the real and imagined exotica and fauna of the New. Painted and covered in black slate powder, the ape resembled the soot-smudged ornamental statuary once fashionable among the powerful and landed. Lodged in the ape’s mouth – either exploding forth or being shoved down its throat, it remained maddeningly unclear – was a large floral form, its surface a combination of the blues, greens and browns of topographical maps surrounded by black and white flags. Blurting out, putting a sock in it: merely two sides of the same coin, a tension Hapaska consistently explores and exploits.

In the smaller of the two galleries Fifteen hundred ways not to see (2006), a scrawny pine trunk, its branches neatly cropped, loomed at an angle in its pinewood stand, like an aborting missile launch. Pine cones, tied on with baby-blue ribbon, dangled from every stub. Stuffed between the scales were the mostly sky-blue parts of a 1,500-piece jigsaw. Pining and pine trees them-selves are recurring elements for Hapaska, and the doubling and tripling of the pun (the cardboard puzzle was itself made from pulped pine) exposed the absurd side of yearning.

In All that was left was polished chrome (2006) two rearing horses, their bodies composed of cotton batting, spar above the wooden outline of a house. With their faces and tails cut from the same fox pelt, they teeter on a wooden see-saw. The smaller one, its head turned in surrender, is bound in leather; the larger is blotted in yellow stains and bound in hemp, the excess draped on the floor. The piece suggested gene-play gone wrong, a nursery hobbyhorse towering over the manor.

At the far side of the larger gallery the Brancusi-like fibreglass ‘knitting spool’ of Looped linear thinking Pac thing (2006) spewed from its Pac-man jaw a leather I-cord, which snaked across the floor, up to the ceiling, out through the entryway and vanished down the stairwell. Two sleigh-runner-shaped supports, covered in (of all things!) black pony skin gave the whole arrangement a kind of awkwardly perfect slapstick feel. Knitting as a form of compulsive mania fuelled No one to knit sweaters for (2006), in which a loose log cabin of stacked cylinders, each cosied in cheap, bright-coloured hand-knitting, were piled like cordwood against a long and obsession-filled winter. Although large and somewhat cumbersome, these pieces had an unexpected fragility. In both of them the sense was of something not just lost but mangled.

Suspended at eye-level, No one won (2006) was a buffalo skull draped with a coyote pelt, the eyeholes of each creature aligned, coyote paws extruding from the skull’s ears. Two steer horns protruded from the cranium, each frigated with sails of horn. Seen from the back, the coyote coat and tail hung down like a nautical coonskin cap. Aside from its overt references to continental conquest and obliteration, it suggested the Native American initiation rite memorably enacted by Richard Harris in A Man Called Horse (1970). Much of No one won’s power stemmed from the fearless combination of delicacy and preposterousness: what could have been tendentious became darkly funny, an exposé of misled notions and misbegotten tactics. Fixing us in its hollow gaze, this floating apparition leaves us to fill in the gaps left behind.