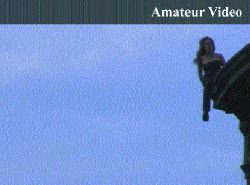 I had no idea how plain Chloe Sevigny is until I saw her standing alone on a windswept beach in Slater Bradley's mournful DVD projection The Laurel Tree (Beach) (all work 2000). Her blunt features, wavy blond bob, and slumping shoulders seem the perfect androgynous accessories for her quietly unassuming uniform of white T-shirt, black skirt, and black knee-high boots. Bradley's choice of a casual urban shorthand for his protagonist heightens the surreal nature of Sevigny's deadpan address, even as the murmuring waves crest, foam and evaporate just feet away. But make no mistake, her modish simplicity is a uniform. Her T-shirt reads 'power through joy' in an arresting gothic font; a declaration as recognizable as epaulettes or spit-shined shoes. Sevigny's uninflected manner is particularly pared down because the speech she delivers happens to be incredibly loaded.

The passage she recites in the halting cadences of a diligent if ingratiating high school student reading aloud in class, is from Thomas Mann's short story Tonio Kröger (1903): 'For, after all, what more pitiable sight is there than life led astray by art? We artists have a consummate contempt for the dilettante, the man who is leading a living life and yet thinks he can be an artist too if he gets half the chance.' Right. I can think of many more pitiable sights, especially those whose desperate squalor doesn't lend itself so readily to the accounts of German Romantic novelists. But then we are talking about a lieutenant, 'a man of the world' as Mann says, a man in uniform who 'reads from a sheet of paper something about love and music'. That the lieutenant is severely mocked by his embarrassed fellows comes as no surprise; what does, is Bradley's tenuous balancing act between maudlin farce, the mythology of any artist's sustaining delusions of protective self-pity, and a kind of universal contempt for the hasty, improvisational mediocrity that is called art simply because the camera is trained on someone and the film is rolling. Bradley is onto something here. The dilettantes, by virtue of their sheer numbers, are now united in their contempt for the artist; or so Steven Spielberg, Oprah's Book Club and vanity presses such as Xlibris.com would have us believe. Godard recently described this turn of mind as a desire to 'convince before one discusses'. Bradley thankfully manages to flip the terms by offering Sevigny up as an emotional lightning rod, a blank screen upon which any of us can reflect on 'suffering embarrassment for the mistake of thinking that one may pluck a single leaf from the laurel tree of art without paying for it with his life'. Reflect, and either wistfully laugh or cry. What Bradley has erased in transforming a movie star known for her inscrutable blandness (a lack of local specificity that hints toward secrets, complexity, unplumbed depths!) into a sort of ventriloquist's muse, is any lingering residue of Mann's pompous moral tone. Sevigny simply stands with all the exactitude of a lie detector, as the camera pans her moon face then cuts slowly away to the soot-coloured gloom on the horizon. It's concise, yet not over-prescriptive; dramatic without being dramatized (although, using the ominous soundtrack to Godard's own Contempt is pushing it).

Also clocking in at just under three minutes is the DVD projection titled Female Gargoyle. A tattooed young woman sits on the ledge of a tall building, one leg dangling over the side. She smokes and contemplates suicide, with equal deliberateness. Bradley has edited out all traces of the firemen and concerned passers-by who attempt to talk her down, but added a thin grey band at the top with the words 'Amateur Video', confirming what we already suspected. What are we left with? The cornice of her confusion? A pediment of grief, blithely indifferent to architectural ornamentation? Human suffering as ready-made? All of the above, leavened with Bradley's compassion, plus heart; about as rare as stumbling upon a female gargoyle in the first place.