Something Covered in Fur 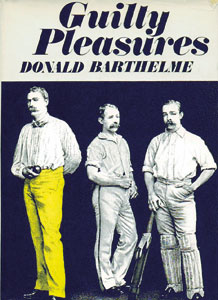 In a catalogue essay on the comical junkyard sculptures of Jim Love, published in 1980, Donald Barthelme notes that Love, like all artists, ‘has a multiplicity of fathers, including those fathers who nip in for a night and are never heard from again, leaving a half-remembered image with no name to put to it’. Gendered visions of artistic influence aside (many of Barthelme’s novels and short stories express an extreme unease about the nature of paternity, thus also about creative inheritance), this could just as easily be taken for a description of the writer’s own vexed attitude to his precursors. At times Barthelme seems to have ingested the whole of literary Modernism and spat it out again in gobbets of strangeness; at others he seems incomparable, sui generis, eccentrically detached from the avant-gardes with which he was associated. At the time of his death in 1989 he was routinely referred to as a Postmodernist or a practitioner of metafiction, but in truth his writing already imagines what might come after the Postmodern moment.

Barthelme’s fiction was recently revived in Flying to America (2007), a collection that reprints stories missing from the previous overviews of his work, Sixty Stories (1981) and Forty Stories (1987), tales that never appeared in any of his seven individual collections and a handful of unpublished pieces. Apart from the remarkable revelation that some of the best of Barthelme has remained unanthologized since his death, the book serves as a reminder of just how playful and audacious was his raid on the Modernist canon. Barthelme took the most rigorous prose experiments of the first half of the century (he began publishing in the early 1960s) and made them seem light, knowing, even whimsical or cute – quite lacking the self-advertised heroism of the literary vanguard. He turned the styles, forms and methods of James Joyce, Samuel Beckett, Franz Kafka, Tristan Tzara, William Burroughs and Gertrude Stein into a singularly poised and implausible prose.

At the start of his career Barthelme worked as a technical writer and found in the dry language of the documents on which he worked a short cut to the kind of juxtapositions he observed in Surrealist art. The arresting admixture of styles and registers is already visible in the earliest stories included in Flying to America. ‘Florence Green is 81’ – originally published in Harper’s Bazaar in 1963 – is narrated by the ingratiating editor of The Journal of Tension Relief, who hopes for some beneficence from the aged Ms Green. The scene is interrupted by a gauche littérateur, Baskerville, who is given to such ungrammatical citations as ‘Mr. Henry James writes fiction as though it were a painful duty Oscar Wilde [sic]’. Even odder than these borrowed aperçus, however, are the sudden interjections of technical or geographical information that punctuate the text, telling of the smallest city in the USA and the length of the River Ob in Siberia. Barthelme had perfected the technique in ‘The Viennese Opera Ball’ (1969), a story of brittle social success interrupted on the page by precise discussion of a hysterectomy and the invention of the automatic bowling-pin setter.

Of the stories in Flying to America the most formally outrageous is probably ‘Bone Bubbles’, a series of prose fragments that draws on Joyce’s Ulysses (1922) and Finnegans Wake (1939), Stein’s Tender Buttons (1914), Beckett’s How It Is (1961) and the cut-ups of Burroughs’ The Naked Lunch (1959). It’s a bravura performance, but by the time of its publication in 1969 Barthelme had developed subtler means of his own to fracture the reader’s sense of a believable milieu and a stable authorial voice. A later story such as ‘Tickets’ (the last he wrote for The New Yorker in 1989) overlays an abyss of anxiety and ennui with a surface of mad optimism and invention: Barthelme’s male protagonists, cuckolded or simply flummoxed by enigmatic women, read like Bertie Wooster stranded in the world of Kafka’s The Trial (1925).

It’s hard to imagine a writer of fiction today attempting the kind of dramatic inflation of the work of his or her precursors – not, that is, just a scattering of influences but the whole corpus, rationale and culture of Modernism – that Barthelme consistently worked into stories that managed also to be among the funniest and most moving fictions of the last century. His own influence seems to have atomized: discrete reminders of what he achieved live on in individual writers. The short stories of Lydia Davis come close to his sense of detachment and his skewed frames of reference: in Davis’ ‘We Miss You: A Study of Get-Well Letters from a Class of Fourth-Graders’ (2007), for example, schoolchildren’s supposedly spontaneous letters to a gravely ill classmate are coolly assessed for their style and sense. Ben Marcus, in The Age of Wire and String (1995) and Notable American Women (2002), has preserved something of the syntactic and ontological oddity of ‘Bone Bubbles’, while David Foster Wallace continues the recursive, second-guessing rhythms of Barthelme’s more baroque sentences. Nobody quite matches, however, the peculiar mix of experimentalism, wit and emotional acuity that Flying to America preserves: ‘“The aim of literature”, Baskerville replied grandly, “is the creation of a strange object covered with fur which breaks your heart.”’