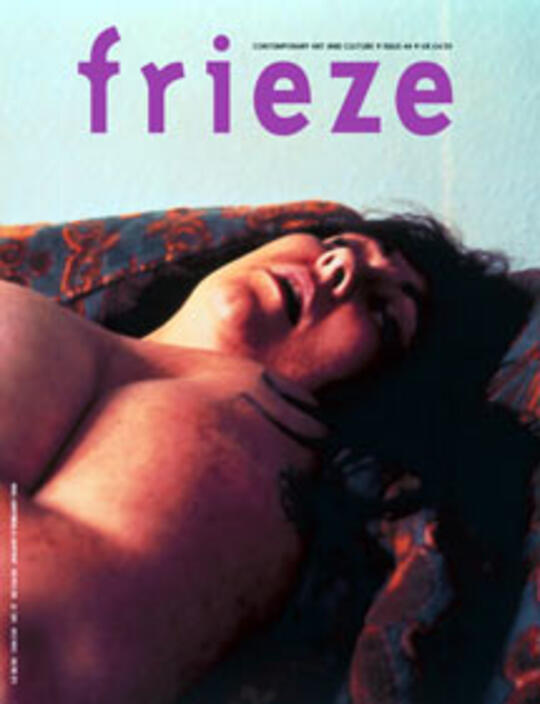 Sophie Calle and Christian Boltanski are currently the most visible French artists. Their latest solo shows in Paris - Boltanski at the Musée d'Art Moderne and Calle at the CNP - were discussed everywhere, from television talk shows to radio interviews, to articles in magazines and newspapers. Perhaps this is because their work shares an ability to address the viewer with simple truths and narratives that are open to exploration. Although their primary material is different - Boltanski works with the great themes of history and memory, while Calle explores the trifling neuroses of everyday life - they both make their art by scraping the surface of things, reaching out for the commonplace, or digging out consensual evidence.

The hyper-legibility of Calle's work is reinforced by its clear presentation. Stacked boxes and rows of photographs, with or without captions, call for a linear reading. Her exhibition 'Double-Jeux' contains as much text as images, which makes it difficult not to 'get' it. Yet viewing the exhibition demands a certain amount of discipline: visitors must diligently read large, framed panels placed against the walls, punctuated by extracts from Paul Auster's novel Leviathan (1993), which provides the transitional link between the different sections.

A combination of reality and fiction has become a leitmotif in Calle's work since the early 80s. In his novel, Auster describes a woman named Maria, whose actions are partly modelled on Calle's. The structure of the exhibition combines the works quoted by Auster in the novel, with new ones created by Calle and inspired by Maria, which are grouped in the first section 'De l'obéissance'. Photos accompanied by texts document Calle's decision to concentrate on a particular letter of the alphabet on different days, as in Des Journées entières sous le signe du B du C du W (Whole Days Spent under the Letter B, C, W, 1998), and to eat a different coloured meal every day of the week - Les menus (The Menus, 1998). The second part functions like a retrospective, showing pieces previously exhibited around the world in slightly different forms. They include Le rituel d'anniversaire (The Birthday Ceremony, 1980-93), Les hôtels, (The Hotels, 1983), Suite Vénitienne (Venetian Suite, 1980), La cravate (The Tie, 1992) and Le détective (The Private Eye, 1981). These are followed by Gotham Handbook (1998) - the weakest part of the show - for which Calle asked Auster to write a series of instructions she could follow.

The result of this collaboration - which ironically involves one of the most narcissistic writers of today - glumly hangs on the walls of the gallery. Legible photos and printed texts protected by glass frames invite the viewer to read rather than look. They assume a neutrality that is undermined by all the formal references the display inevitably calls to mind. Not only do the showcases of The Birthday Ceremony, with their carefully organised shelves and white structures, evoke the work of Beuys, but the detective pieces recall the documentation that artists such as Vito Acconci made of their actions back in the 60s and 70s. Georges Perec's narrative devices are also mimicked in a number of pieces, especially in the days spent concentrating on the letters B, C and W, while The Menus stand midway between Antoni Miralda's Eat Art (1966-72) and pictures for Elle's cookery recipes.

In short, the problem with the show seems to reside in the means with which Calle has chosen to convey her obsessional approach to autobiography. Working with a similar agenda, an artist like Tracy Emin manages, through her videos, installations and sewn pieces, to create a warmer, livelier engagement that is desperately missing in Calle's rather cold, contrived objects. The most evident failure of her project is the antagonism between her low-key original aim - she says that her work is merely a way to survive each day, rather than an artistic method - and the ostentatious quality of her monumental realisations.

The spirit that sometimes pervades her films, newspaper interventions (Libération, 1983), or even her books, is absent in this show. Which makes one wonder why, when contemporary art has to stand beside so many other, often more exciting media, she would wish to hang these things in posh, white-walled galleries, when it seems as if they would probably be much more at home elsewhere.