The Spectacle of Competition 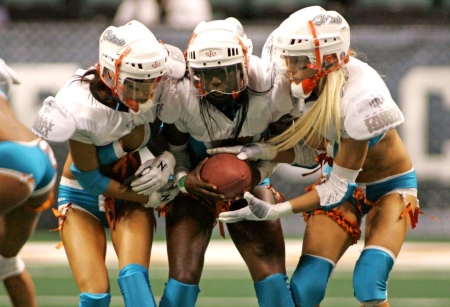 Upon first hearing of the Lingerie Football League (LFL) it is hard not to feel like some watcher of the skies when a new planet swims into view. The LFL is a women’s American Football league consisting of ten teams of seven players competing over a 20-week season. These teams bear such names as the San Diego Seduction, the Philadelphia Passion, and the oddly meteorological, Seattle Mist. The players are young, pretty and uniformly thin. As with genuine American football teams their uniforms are strikingly distinctive: boy shorts are combined with colorful bra tops, chokers and leg garters, while helmets and shoulder pads give the players a top-heavy silhouette that suggests Bambi in armour.

The LFL traces its origins back to 2004 when the Lingerie Bowl, a pay-per-view event, took place during the half-time of the regular Superbowl (in that game the New York Euphoria overcame the Los Angeles Dream 6-0). It has since gained in popularity, particularly amongst the 18–35 year old American male demographic at whom it is squarely aimed. A typical passage of play, as described by a member of the Miami Caliente, reveals the sport’s unique charms: ‘Our QB [quarterback], Anonka Dixon, had her bra top ripped off. Three girls from the Chicago Bliss jumped on her after the play was already over and shredded her top to pieces. There she sat, topless on the field, and for no other reason than she is an unbelievable player and a huge threat to Chicago’s defense […] they wanted to take her out of the game.’

One might be tempted to say that the LFL is a startling critique of the homoerotic undertones that are rife within men’s American Football. Indeed American Football’s hyper-masculine qualities, its predilection for tight trousers, bottom patting and suggestive positional names (‘tight end’) have long made it an easy target for artists, theorists, critics, or anyone who is not American. Yet while to claim such satirical depths for the LFL would be disingenuous, what the LFL does achieve is equally subversive.

It was in 1972 that American sports and sex began to grow increasingly intertwined. That was the year the cheerleaders for the Dallas Cowboys were revamped from a traditional male-female group of high school students whose job was to organize the crowd’s chants, to the all-female, all professional, provocatively dressed dance group for which the team is now famous. Other teams and sports were quick to follow, most notably the Philadelphia Phillies baseball team who instigated a group of attractive usherettes named the Hot Pants Patrol.

Nevertheless this sort of sexual titillation has always stayed on the sidelines. Indeed such has been the sublimation of sex on the field of play that when the musician Janet Jackson dared to bare her breast in the middle of the playing field during the Superbowl’s half-time show – also, coincidentally, in 2004 – the media and public cried obscenity. Faced with this repressive and repressed sporting landscape, the LFL has bravely brought sex and sport together in one scantily clad on-field embrace.

Perhaps this should come as no surprise. In her study on sexuality and sport, The Rites of Men (1999), Varda Burstyn suggests that ‘sport in the 20th century has undergone a qualitative shift to become spectacle.’ Quoting rule changes devised for television, the rise of slow-motion replays, and the increasing focus on a handful of ‘stars’, Burstyn sees sport as losing its participatory and playful elements. She suggests that sport is being ‘played for and shaped into a form which will be “consumed” by spectators searching for titillating entertainment.’ The LFL fulfils Burstyn’s theory and more. By having players who are quite unsuited to the competent playing of the game – ability is secondary to looks – the LFL has not only raised the spectacle of sport to previously uncharted levels, but it has also sidelined one of sport’s most traditional defining characteristics: competition. This is not to say that no competition exists within the LFL – the teams fight it out gamely – but the reason people watch it has nothing to do with wanting to know who is going to win. What we are left with is a sport in which every element is subordinated to spectacle. George Orwell once described sport as ‘war without shooting.’ If that is so the LFL represents a kind of half-naked armistice.

There is only one other sport that immediately comes to mind in which the competitive instinct has been whittled down to such a fine sliver and that is bullfighting. In bullfighting the bull’s death is a fait accompli. Death to the bullfighter, while possible, is not probable. What is left in the classical, ballet-like movements of the matador is the shell of sport, the skill without the competition, something which hues close to Kant’s definition of beauty, ‘a purposiveness without purpose.’

Yet can a sport be robbed of competition entirely, or will the competitive instinct rise in a different form? The writer Alexander Fiske-Harrison suggests that even in the mannered art of the bullfight competition still exists, but it is not between man and bull: ‘To create spectacle is to compete for the audience’s attention: with other spectacles, the audiences’ own worries and daily lives, and, in the case of the bullfight, the discomfort of the stone seats.’ Even spectacles have to compete with one another, and never is this more true than in the LFL. With pornography readily available on the internet, and advertising increasingly suffused with sex, the women of the LFL are competing not against each other but for the roving gaze of the lustful male. For the LFL sex has become the main event on the field of play. It is competition that now surreptitiously walks the sideline.