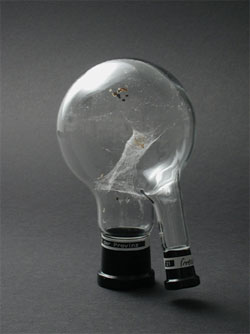 As a basic organizing concept for hawking just about anything, to say that eBay is spectacularly successful would be something of an understatement. How successful then could this particular mechanism of sorting, ordering and ‘enabling’ be, when appropriated and formed into a curatorial method? ‘Spinning the Web – The eBay Connection’ posed this very question by creating an exhibition from objects bought through the online trading site, using key words that describe art works from the Museum für Moderne Kunst’s permanent collection as a starting-point, to locate ‘partner’ works. The resulting ensemble was disparate in form and idiosyncratic in appearance, presenting a weird range of bits and bobs held together in a clean white cube.

The exhibition was arranged so that the museum’s works sat alongside the corresponding eBay finds, accompanied by a mini-handbook listing the titles and vendors’ descriptions of their wares. The eBay items were not labelled and as a result their meaning could be read as relatively free-floating (although it should be added that without the contextualizing information contained in the booklet you could feel a little lost), whereas the art works were conventionally signposted and in that sense clearly defined as ‘art’.

Francis Alÿs’ Time is a Trick of the Mind (2004) is a looped animated film of a child clacking a stick along railings, projected in two duplicate versions just above floor-level; these gradually move out of sync, self-reflexively pointing to the inadequacies of their own production. The work is accompanied by a battalion of 28 walking-sticks (including a ‘silver erotic walking-stick’ from Essex – well, where else? – and an antique ‘walking-stick with negro’s head’, which, when twisted, activates brown glass eyes and an ivory red tongue), pursuing the common aim of defending, or manifesting, the presence of the audience as users of the exhibition. In understanding this particular work the immanent passage of time could be considered as measured movement, and what better aid could there be for this than the steadying potential of a cane?
The most successful room combined works by Marcel Duchamp, Yves Klein and Thomas Ruff with photographs and footage of various astronomical escapades. These ‘lunar follies’ read as a cohesive whole, possibly because of their consistent historical placement and weight, which, when set against the content of other gallery spaces, filled with more oblique connections, revealed a clearer compound meaning of eBay finds and the collection’s art works.

1950s Photo of Lunar Eclipse in Black Starry Night Void – purchased from an apparently real location called Groovy Gorilla Grove, USA – sat among a plethora of interstellar-related photography and paraphernalia situated in a darkened room as if suspended in space. The special 1945 Duchamp edition of View: The Modern Magazine displays all the characteristics of what Merleau-Ponty might term ‘the Great Object’. The front cover shows a bottle of Bordeaux drained of wine but filled with spumy smoke trailing across the page, remarkably reminiscent of the Milky Way. The back cover, a message built of collaged letters, demonstrates Duchamp’s notion of ‘inframince’, a neologism of his that, he stated, could not be defined, only illustrated: ‘When the tobacco smoke smells also of the mouth which exhales it, the 2 odors marry by the infra thin [sic].’

Clearly, eBay is not simply a place where goods change hands; as an obvious market leader (currently more than 70 per cent of all online auctioning now occurs through the site) it represents ‘the world’s largest personal online trading community’. Moreover, as a cultural phenomenon it is very unusual in the way it draws disparate communities – who by their very nature and interests are incredibly specialist and demanding – into a shared identity of activity, mediated by material culture in browsing, buying and selling practices.

Vilém Flusser, speaking of ‘digital apparitions’, has observed, ‘that perhaps the entire universe, with all its fields and relations […] might be a projection which calculatory thought attempts to retrieve “experimentally”. Ultimately, computers demonstrate that we can not only project and win back this one universe, but that we can do the same with as many as we want.’ eBay confounds this to a certain extent, in that what we are really buying are digital images, but they are delivered as real objects to our door. Therefore we can be sure of two things: first, that they really exist; and second, that we really exist, since we have ‘created’ their arrival. Our browsing and choosing has the power to transform Flusser’s ‘digital apparitions’ into material fact. The same applies then, with visual art, inasmuch as we as the viewers – disparate in interest and varying in knowledge – constitute the meaning of the art work, or the work itself. And here could be the real significance of ‘Spinning the Web’, as a coda for how to use a gallery, by creating connections and thereby meaning between seemingly random (or at least not clearly explained) groupings of objects. In a very real sense, then, ‘Spinning the Web’ situated the market-place as the curator: perhaps, after all, some things never change.