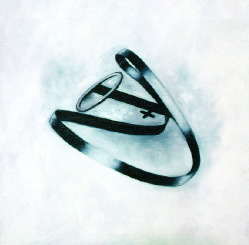 A flat black ribbon is unravelling, or just possibly snapping back into shape - the picture's rendering of the torsion is almost painful, although this painted stripe is no nerve-bound muscle or length of high-tension steel.As it unwinds precariously, it floats above a white square, unadorned except for some shading. Berlin painter Antje Majewski - who co-curated 'Splendor Geometrik' with Anke Kempkes - has created an image of longing: a portrait of an actual - but now lost - sculpture of an elegant, dynamic loop created by the Polish avant-garde artist Katarzyna Kobro to embody her anti-illusionist theory. The original work was created in the 1920s, and all that now remains of Suspended Construction 2 is a sketch, a photograph of dubious provenance and two reconstructions, both of which were probably based on the sketch. As if putting its origins on display, the sculpture that became a sketch now hangs on the wall as a copy in oil on canvas. And it is this painting, entitled Suspended Construction 2, Katarzyna Kobro (2003), that gives the show its direction and format, enlisting Modernism in the fight against the indifferent passage of time.

Although 'Splendor Geometrik' includes nostalgic references, it does not dissolve into sentimentality, preferring wilful experimentation with the abstract. The curators took the show's title from the name of a Spanish electronic band, which Majewksi and Kempkes were both drawn to by the fact that it sounded like Esperanto, appropriate to a show that included a range of international artists. Majewski employs large, flat screens to divide up the gallery space. Wandschirm (Wall Screen, 2003), a metre-high stepped wooden frame with opaque windows, leads from the corridor into the office; and a white-painted platform functions as an elongated threshold to the main hall, where it ends as a catwalk for a black tailor's dummy wearing a pleated black dress with magenta bobbles - ABC (2003) by Ayzit Bostan. This stands in confident contrast to Eva Rothschild's Minimalist construction, in which differently shaped triangles made of black-painted mahogany strips form Mother Superior (2003). Although the shapes stand in space like a few carefully drawn lines, or like a geometrical skeleton, the figure is as hermetically sealed as a pyramid. Attached along one side of the entrance podium, a screen painted in yellow, magenta and grey Auge (Eye, 2003) forms an effective and well-proportioned backdrop for smaller-format works such as Anja Schwörer's photograms (Untitled, 2003) and Gillian Carnegie's circles in oil (Untitled,2002). Taken together, Majewski's installations create an impression of pop-up three-dimensionality.

'Splendor Geometrik' is an arrangement based on simulated depth and reduced dimensions: while Kobro is invoked as a kindred spirit, the Polish Conceptual artist Edward Krasinski, who is over 70, is included as a contemporary. In the office two of his strictly Minimalist works are hung on the wall: a pair of white objects with window-like fold-out sections, both entitled Intervention (1981 and 1990), and a piece of wire spiralling out of the wall near the ceiling (Untitled, 1967-8). Weightless but firmly attached, the dark metal bends itself into a wave and ends in a loop-the-loop. Krasinski connects the white wall-mounted objects with the installation by means of his trademark bright blue strip: the tape runs horizontally over walls and pictures, leaving only the wire untouched. Monika Sosnowska links to this directly in Untitled (2003), in which a glass cube with a white painted interior is crossed by a coloured line in the same blue. But the deliberately imperfect application of the white paint and the thickly applied red paint transform this cube into a complex, nested object with surfaces that appear disconcertingly unstable.

In the corridor a metre-long wooden board - Untitled (2003), also by Sosnowska - is suspended from the ceiling. Neither a mural nor an easel painting, its dark red and beige patterning recalls both architectural plans and commercial wallpaper. Cast in concrete, it would be perfectly at home mounted on any 1970s façade. With its exemplary elegance, the panel operates with the same kind of all-encompassing architectural abstraction that used to characterize the imposing exteriors of palaces in the former socialist republics, making it both a historical memory and a contemporary commentary - again, on simulated depth and reduced dimensions.