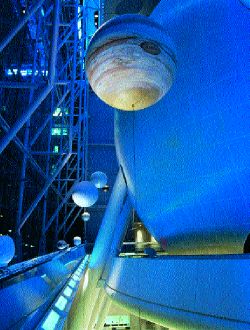 2410 years ago Plato accounted for the order of the universe as a demonstration of God's perfection, writing in Timaeus that 'he formed it as a single visible living thing which was to include all related creatures [...] By turning it he shaped it into a sphere [...] giving it the most perfect form of all.' 1 Plato's description provides one of the earliest touchstones for the new Hayden Planetarium at the Rose Center for Earth and Space at the American Museum of Natural History. Many other models echoing Plato's spherical ideal spilled out into history before the Rose Center: Cellarius' 1660 diagram Harmonia Macrocosmica, tainted by theology, displays the sun in rotation around the earth and the five known planets of our solar system, but still within Plato's sphere; a century or so later was the Cenotaph to Sir Isaac Newton, a globe-shaped planetarium by the visionary architect Etienne-Louis Boullée; a more recent example is Wallace K. Harrison's Perisphere at the 1939 World's Fair. But one feature of Plato's perfect world order eluded Cellarius, Boullée, Harrison, and all the others: perfection itself. Today, the expression of perfection has finally become manifest in the map displaying billions of stars at the Hayden Planetarium. Created by the Museum of Natural History and NASA, this visualisation is the most comprehensive and scientifically truthful three-dimensional model of the universe ever created. But I get ahead of myself.

James Stewart Polshek, the architect of the Rose Center, originally conceived his project as 'an iconic scientific tool', but by the end of the design phase had begun to refer to the sphere suspended within a glass box as a 'cosmic cathedral'. In fact, it is both tool and cathedral, the blurring of hard science and revelation into a single experience, embedded with awe. The lighting in the hemisphere begins to wane as you take your seat in the theatre. The voice rising in the darkness is that of Tom Hanks. He narrates your virtual voyage through the galaxy as you fly at trillions of times the speed of light through the Milky Way and some 50,000 local galaxies, out towards the edge of the observable universe billions of light years away. You become immersed, contained by the 100,000 observed stars within 1000 light years of Earth, and then engage in a fly-by of a three-dimensional gaseous rendering of the Orion Nebula, before returning to our solar system, which by now can only appear trifling. What unfolds is unprecedented in detail and accuracy, the result of enormously complex data sets collected by the High Precision Parallax Collecting Satellite launched by the European Space Agency, and NASA's Hubble Space Telescope. The display represents the largest volume rendering in the history of computer graphics and the largest scene ever built for a virtual reality simulator. The Rose Center is pure visual extravagance; it redefines fact, fantasy and folly: an expression of visionary architecture that plays host to a virtual path through the continuous architecture of our universe.

Before the voyage begins, Hanks offers a preamble alerting the audience to a new order of cultural relevance. 'This is not', he assures us, 'an artist's fantasy'. His voice resounds with a number of allegations: the real has become more fantastic than fantasy - artistic or otherwise - can manage; the visualisation of information is not only an acceptable level of the real, it is indisputable; hard science has successfully negotiated a new relationship with entertainment in order to make itself understood; and, finally, as the movie star unceremoniously points out, art has been left behind.

Hanks' introduction, 'this is not an artist's fantasy', is a poignant indictment of the status of art within our culture. The Rose Center is a signal of how deeply sensuous, even 'aesthetic', the real has become within our information culture. And in the wake of its richness, it presses us to evaluate art's relative bearing on that culture. Where advanced art is concerned, the Rose Center constitutes another form of the unremitting question: if the transition from an industrial to a media society has carried us into the realm of the information society where the power of creativity is increasingly understood as a product of information, how will art express itself? Jack Burnham perhaps best described the erosion of art's conventional relevance in such a culture, writing in 1968, 'in the automated state power resides less in the control of the traditional symbols of wealth than in information'.

Created by a trans-disciplinary team of science visualisers, astrophysicists, and computer programmers who applied advanced computing techniques to a vast astronomical database, the experience within the Space Theater can make fair claims to leading edge relevance, while speaking in the highest order of the culture's visual language. Moreover, the Hayden visualisation is updated as new discoveries about the universe are made, thereby guaranteeing its continued value as a real-time expression of reality. The heterogeneity of the sources and materials used to create this experience sets it very far indeed from its closest relation inside the art world: the enterprise known generally as 'multi-media installation'. But the 'real', experienced within the Space Theater, is located in a history after the relevance of image making and representation; it is of another genre entirely - the breathtaking visualisation of pure and truthful information.

Another aspect of the Rose Center's achievement is the way science has negotiated a fresh affiliation within the domain of entertainment. The motive is the complex desire to be appreciated and understood. This kind of reconciliation between advanced disciplines, such as science and entertainment, has already made a deep impression within the information culture, a fact that is becoming ever more apparent. Think of the CIA's homepage for kids: http://www.cia.gov/cia/ciakids. It delivers deftly sophisticated reality-based content (code breaking, creating disguises, geography), veiled beneath an open-handed and relaxed gaming style. As with the Rose Center, the CIA's high-octane content pre-empts every criticism. The Agency has bargained for a new liaison with the currency of entertainment to capture the urbane audience it seeks. It is this same strategy that lends the Rose Center the mantle of cultural relevancy while it haemorrhages from our modest encampment called the art world.

This is a serious question. Increasingly, it seems to matter very little how artists imagine reality or fantasy. When I think of the transdisciplinary project at the Rose Center, it seems inevitable that the art world will be bypassed by leading disciplines on their way to formulating the terms of power that Burnham projected onto the information culture more than a quarter of a century ago. The art world is very far from the leading edge of that effort. It seems fair to conclude that it has been left to the other side of the widening gap between developed and developing disciplines, a gap that mirrors the growing disparity between developed and developing countries. To see it otherwise is sheer fantasy.