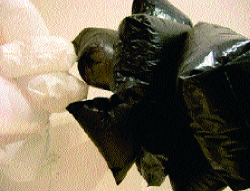 For an exhibition that could have been awkwardly eclectic, the Serpentine has pulled off a surreptitious coup - a group show that makes a virtue out of necessity in its approach to the problem of defining a dominant theme in current art. Where other recent 'state of the art' shows have tried and failed successfully to combine cohesion with diversity, the simple parameters of this exhibition allow the works to play off each other, using improvisation, informality and irreverence. Yet confusion about defining tendencies is not a contemporary condition, as the exhibition catalogue implies. Surveying the semantic schizophrenia of the late 1960s and early '70s, and such unintentionally amusing titles as 'Micro-Emotive Art', we can look back with the smugness afforded by hindsight and see that a sort of Darwinism of designations left only the fittest, such as Arte Povera, to prosper.

In the absence of such retrospective clarity the works included here are instead left to cohabit with, contradict and occasionally corroborate each other. Martin Creed's Work No. 100: on a tiled floor in an awkward place, a cubic stack of tiles built on top of one of the existing tiles (2004) obstructs the entrance and threatens to send the unsuspecting visitor flying, in a witty and literal Minimalist stumbling block that looks like a Carl Andre with a grudge. Other works that play with the gallery space include Andreas Slominski's Wall Built from Top to Bottom (2004), which, as an exercise in compulsive over-complication, acts as a cross between tautology and Tourette's. Sarah Sze's site-specific Second Means of Egress (Orange) (2004) snakes a miniature fire escape around the central room, dominating the space despite its diminutiveness, while vagaries of scale are instead used to invoke vulnerability in Aleksandra Mir's The Big Umbrella, London (2004). Mir's contribution consists of an oversize city gent's umbrella. Attendant photographs document her looking like a damp flâneur hauling it around London.

Mir's whimsicality is the antithesis of the aggression present (or rather, not present) in Maurizio Cattelan's work, which is conspicuous by its absence from the gallery. Noticing his refusal to play with the other artists present, I had to inquire, like a parent after a delinquent offspring, 'What has he done this time?' At the risk of spoiling the punch line, Cattelan's Untitled (2004) is a piece that acknowledges that, in the current political climate, playtime is over. Drawing on preconceptions and paranoia, Cattelan eschewed the gallery in favour of infiltrating the city - he fly-posted a love-letter written in Arabic all over central London, without any accompanying explanatory text.

Shock and awe, rather than any mousy playfulness, is the strategy of Tim Noble and Sue Webster in their piece Kiss of Death (2003). Composed of an orgy of stuffed animals, the sculpture, like an Arcimboldo on acid, casts a shadow of silhouettes of the artists, their heads on poles with a bird pecking Noble's eye. Shadow play is also used, albeit to entirely different effect, in Pipilotti Rist's unashamedly beautiful Apple Tree Innocent on Diamond Hill (2003). Plastic packaging, suspended from a branch, throws moving shadows on to a video projection, while sending opaque shimmers around the room. Tony Feher's On a Fleeting Necessity (2004) also uses light by sticking blue tape on to the windows of the gallery, creating the luminosity of stained glass.

The ephemera of the everyday and the detritus of consumer culture are also explored in Clouds (2004), by Gabriel Kuri. Here plastic shopping bags attached to ceiling fans and inscribed with words and phrases such as 'Thank you', 'Gracias' and 'Have a nice day' prove that platitudes are the new Esperanto. Trying to banish unwelcome comparisons with the windswept bag in American Beauty (2002), Kuri makes the same point as the Hollywood film, that even quotidian rubbish can be beautiful, while imbuing his piece with a surprising sculptural solidity. Similar material is invoked by Tony Feher, if with more conceptual rigour, in his Eight White Elements (2001). Minimalism meets Malevich in this tower of polystyrene packaging.

Credit is due also to Rochelle Steiner, who curated the show, for using lineage as a linkage device. What would otherwise have been, to parody Pirandello, a show of 13 artists in search of a curator, ends up instead a pleasingly open-ended proposition.