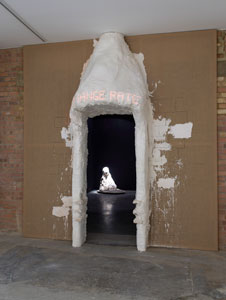 Looking around London’s galleries in September, there was a noticeable lack of projects dealing with any direct form of political subject matter, and, with this in mind, Stephan Dillemuth and Nils Norman’s project at Vilma Gold stuck out like a proverbial sore thumb. Their collaborative project, A Mysterious Thing (2007) – a small grotto-like installation that addressed the current nature of the art market and its relationship to the wider economy – was on view at one end of the gallery. This was accompanied by a group exhibition that the pair had organized based on the late dealer Colin De Land’s seminal New York gallery; American Fine Arts Co. Ltd., which was active between 1988 and 2004 and where both Norman and Dillemuth had exhibited work.

The first thing that struck me was the unusual nature of the gallery’s entry intercom system. A laconic English voice was being transmitted from its speaker, and I suddenly realized that, rather than being party to a secret conversation inside the gallery, I was hearing the introductory sound-piece to the show. The recording contains statistics and ready-made texts collected from newspapers such as the Financial Times and The Economist and speaks of economic bubbles throughout history, from the tulip mania of 17th-century Netherlands to the dot.com bubble of the 1990s. Once inside the gallery we were confronted by a roughly hewn plaster archway that formed the entrance to the artists’ mysterious cavern and provided a screen for other texts that mirrored the soundtrack outside. References ranged from John Maynard Keynes’ interpretation of ‘animal spirits’ – a theory which asserts that our positive activities (analogous to contemporary art, capitalism and risk-taking) are formed by a spontaneous urge to action rather than any firm logical or mathematical expectations, whether moral, hedonistic or economic – together with comments on hedge funds, diversification and the economy of art’s ‘dinner party aspect’.

Inside, the darkened cavern looked like a temporary squat, with three bed bases providing seating. Dillemuth and Norman’s DVD I’m Short, Your House (2007) kicked things off by telling us that the nature of ‘bohemianism’ has been irreversibly changed by the market’s complete control over artistic expression. Later we see various characters talking on the phone. One of these, an obvious caricature of an art collector, utters to a dealer in a measured monotone ‘blah, blah, blah … OK, great, I love it … I’ll buy it. Yes, see you in Basel … blah, blah, blah …’.

This relationship between consumer and art-world insider is rendered vacuous by Dillemuth and Norman, and through the whispered soundtrack of their DVD’s narrative it comments on the mystery of art’s functions and values in a wry way. Unfortunately, though, the work sometimes fails to assert a position outside the ironically appropriated quotations it uses and simply occupies a negative, vague and enigmatic territory of its own. If the artists believe art should have a transparent social dimension, perhaps they ought to have presented a clearer argument rather than a further obfuscating set of dilemmas. In a humorous poke at the pretensions of certain video works the film’s characters also hide behind intentionally mysterious masks, yet little transformation takes place other than the parodying of existing rhetoric or systems of knowledge.

Everything else in A Mysterious Thing – from the glittering plaster portrait F.A. Lores, The Final Artist (2007), which looks like a model of the world’s last doomed, reified and frozen artist, to the dumb excessive New Rave Photoshop style of the project’s invitation card – seemed to fire a shot at the mythmaking of recent variations of Expressionist practices; like a combination of work by Jonathan Meese, and the DayGlo style of current London art collectives such as !WOWOW!. Unusually, this provided the work with less ironic yet also less predictable content and seemed to create a new, wonderfully crass sub-genre of Expressionism and Conceptual art by taking hybrid languages and investing them with a scrambled coherence and an unprescriptive, affirmative critical finish. Whether this was intentional is debatable, and I get the impression that both artists are more likely to have wanted to point directly towards the pitfalls and irrationality of Romantic aestheticism through a straightforward parody of its various stylistic traits.

In contrast to the elusive veneer of the artists’ installation, Dillemuth and Norman’s curatorial project, also titled ‘F.A. Lores’ (2007), was a more straightforward and pragmatic exploration of the nature of creativity within the horrors of our accelerated commercial environment, and sat in opposition to the knotty and convoluted post-ironic subjectivity of their solo project. Of those artists included, Art Club 2000, G.R.E.A.D. and Daniel MacDonald all gave practical accounts of the reality of life for artists in New York. Art Club 2000’s book of interviews with gallerists about their move from SoHo to Chelsea proved interesting and included a conversation with De Land himself, who was known for his unusual disregard for commercial success (he famously once let Gareth James close his gallery for a month to protest about the commercialization of art), while G.R.E.A.D.’s analysis of the financial implications for students in New York pointed to the criminal exploitation of the current 20-something generation, with many students being between $60,000 to $100,000 in debt after studying at the city’s art colleges. Through this the exhibition indirectly commented on its local situation and the ever-increasing concern for property, art fairs and the effects of the market on artists in London.

If Dillemuth and Norman aimed to demonstrate positive power against current economic forces, they succeeded through a tension between their unpredictable collaboration and the work in their generously organized group project. Perhaps what this project points to, beyond any negative and restrictive institutional parameters, is the fact that galleries such as De Land’s prove that it’s still possible for artists and dealers to work imaginatively together. Despite many arguments to the contrary, it’s not impossible to resist the increasingly overwhelming pressures from every angle to succeed on a commercial level.