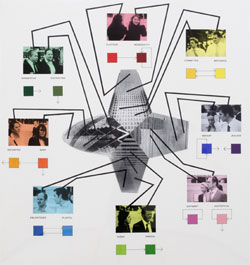 Printed along the top in clean Letraset type: ‘Ich fürchte meine Kinder haben ein gefährliches Alter erreicht’ (‘I’m afraid my children have reached a dangerous age’). Below, collages of housing estate snapshots assembled like the prefabricated elements of a concrete tower block: monotonous surfaces, clumsily formulated scrawls, smeared window panes – the façades of defunct residential Utopias. ‘How do you think we can show that we are alive, creative, not dead yet?’ asks the text under one collage.

Stephen Willats’ life in Berlin in the late 1970s and early ’80s is one point of departure for his exhibition ‘Multichannel Life’. The British artist pursued his Conceptual work, occassionally in German, focusing on ‘the periphery of society’ by talking to people, taking photographs and assembling the results in such a way that they look like posters or illustrated charts. His work combines the graphic qualities of documentary photography, the pictorial languages of diagrams and the exaggeration of propaganda – and yet is something else. Early works such as Lift Drawing (1979), One Must Take into Consideration the Neighbours (1980) and My Children Have Reached a Dangerous Age (1979–80) show that Willats has worked continually over a period of decades on a concept that sites both art and lived experience as part of a participatory oeuvre. It reads the reality of the suburbs today like the Structuralists read a text, and often refuses simplistic answers.

Looking at Ourselves (1976) consists of four works on paper in pale wooden frames. The focus of each is a photograph: four young people, talking among themselves or getting into a car. Above their heads are shapes like angular thought bubbles. Willats has drawn in connecting lines, leading to explanatory boxes which reveal that each of the men and women has an origin, a future and an intention. This is the moment at which four lives intersect more or less by chance, a point that could be measured diagrammatically in terms of time, place and sociology.

Willats is interested not only in chance meetings and meanings but also in the question of who decides how they are represented. In Nothing Is Quite As It Appears (2000) a television on the floor plays a loop of a woman walking beneath an overpass. But the scene is broken, like a Cubist nude, by repeated shifts in perspective and camera angle – the direct result of Willats’ invitation to four different directors to shoot the same sceene. These multiple views are spread over diverse media, with a tape recorder supplying the sound, a simple printed pamphlet offering information about the concept, and photographs that compare the sequences.

The artist often invites people to participate in his work. In his view art is the result of social interaction, not the product of a single author. At the same time – and this is the focus of interest in ‘Multichannel Life’ – he has meticulously deconstructed his understanding of the world around him with his discovery that ‘the fabric of this daily reality is filled with signs and symbols that radiate their messages to me without my intervening or having any influence over them, constructing the consciousness I have of myself and the world in which I live’. The work entitled Multi-Channel Vision (1999), for example, breaks down into a wall full of details – street sign, manhole cover, car tyre, graffiti – circled, marked and cut out. The picture of a street has disintegrated into shards. Even before satellites looked down on the earth and allowed us to view the planet in segment, Willats had created his composites, fragmenting the world like kaleidoscopes, breaking down the closed semantics of a street to discuss the methods by which streets are planned, built, furnished, inhabited and subsidized.

The exhibition also includes recent works such as In Relationships Never Ending and During the Lunch Break (both 2004). The images in the diagrams show people on the phone or in conversation. The photographs tinted in pale tones appear to have been specially prepared for the diagram, which consists of arrow links and open-ended connecting lines. But the terms attributed here and there – ‘jealous’, ‘diffident’, ‘egotistical’ – offer no further clarification. The core of each piece is a collage – staggered high-rise silhouettes, or a four-pointed star assembled out of skyscrapers – which acts not as a background but as an embedded point of reference. The city is seen as a model, and as a reality remains quite literally at the centre of Willats’ thinking.