'summer neared, as the evenings lengthened, there came to the wakeful, the hopeful, walking the beach, stirring the pool, imaginations of the strangest kind—of flesh turned to atoms which drove before the wind, of stars flashing in their hearts, of cliff, sea, cloud, and sky brought purposely together to assemble outwardly the scattered parts of the vision within. In those mirrors, the minds of men, in those pools of uneasy water, in which clouds for ever turn and shadows form, dreams persisted, and it was impossible to resist the strange intimation which every gull, flower, tree, man and woman, and the white earth itself seemed to declare (but if questioned at once to withdraw) that good triumphs, happiness prevails, order rules; or to resist the extraordinary stimulus to range hither and thither in search of some absolute good, some crystal of intensity, remote from the known pleasures and familiar virtues, something alien to the processes of domestic life, single, hard, bright, like a diamond in the sand, which would render the possessor secure.’
Virginia Woolf, To The Lighthouse, 1927

On the wall hangs a large sheet of paper; if you look closely you can see the faint tracings of hard pencil straining to overcome the absolute whiteness and bring an image to life. The outline of a landscape swims into focus: a dry vista of caked earth broken by the occasional spiky plant or rock poking through the soil. The ground hangs near the bottom edge of the paper while the majority of the space above the horizon is occupied by an enormous sun. Wobbling like a giant egg yolk its shimmering edges evoke a palpable and desiccating heat.

There is no colour, no shading and only the most insubstantial of lines, yet there you are, in the space of memory – a memory of summer. It’s the season when light and heat extend time to almost ridiculous lengths – the recollection of a summer’s day can occupy the space of a week, even a month, of winter. You are pinned to the ground by the sun itself as it warms your skin and makes you newly aware of its presence 93 million miles away; then you block out its rays at the last moment to cast your crisp-edged shadow on the ground. (The iniquity of winter is that overcast skies mark your presence on the Earth with a nebulous dishwater-grey blot.) The summer sun casts a light that transforms leaves into tiny burnished mirrors, reveals stone to be made up of minute granules of varying colour and reflectivity, and enhances vision to a level of microscopic acuity. All the familiar and mundane objects around you – the texture of daily life – are suddenly animated again, made new and endlessly fascinating.

Perhaps this is responsible for the annual extension of time. Sunlight binds things together and fixes them in place while every particle of matter seems to vibrate wildly under its rays. With an increased sense of corporeality and awareness of detail, you can slip between scales, from the teeming microcosm between the blades of grass in a lawn to being just another shadow-caster in a hot, dry landscape – a granular bump on an aerial photograph.

Ashram (1999), by Jean-Michel Wicker and Vidya Gastaldon, is a collection of relics and fragments: partially completed embroidery of things that half exist or were only ever memories; objects that look like an assortment of prayer beads, pottery shards, ears of fungus or strange soft woollen things reminiscent of coral or seaweed yet hard to place precisely. Everything is apparently casually positioned, but at different levels and on different supports – on cushions, draped boxes, pouches, thin sheets of fabric or laid directly on the floor – creating an informal hierarchy of significance and a sense of varying degrees of preciousness. But looking at Ashram is like beachcombing: it’s another macro- to microcosmic shift that plays with your perception of time and scale. Peer into a rock pool, each a world unto itself, and you become absorbed until something in that other world you recently left suddenly grips your attention and snaps you back to a different temporal and spatial scale. Memory – and a great deal of thinking – is a similar thing: a pool with its own scale and sense of time into which you dive now and again, and from which you can net the familiar and not-so-familiar bits of yourself that you thought you had lost – like a special pebble or salt-dusted sea shell tucked away and forgotten in a drawer of a summer house. Perhaps meaning works the same way: recognition is easy but not always particularly helpful on its own; comprehension requires a heightened sense of perception that takes you beyond simple visual appearance.

Politique de l'Extase (Politics of Ecstasy, 2000) suggests that it might be a diagram of some kind – perhaps an attempt at mapping the factional disintegration of a country that takes politics very seriously and whose inhabitants have a peculiar inability to compromise. Dreadlocks of wool in an indescribable variety of textures, colours and weaves are interspersed with erratic lines of thread that shoot along their length, occasionally knotting themselves up at points of imagined significance. Some strands seem to mark out intersecting sets, other suggest links between elements, ranging from the tenuous to the indestructible. Some of this woollen viscera is obliviously self-contained, forming pretty concentric rings or flower patters; other parts overlap and interlink, drawing the whole thing into some kind of whole. At each extremity is a giant pom pom: one is shell pink and limp, the other steel blue and taut, not yet a true pom pom as its edges are uncut, but it might be one day. What can it all mean? On a logical level, the answer is nothing. It’s not a diagram, although it might resemble one; rather it’s a sense of interconnectedness made tangible and exploreable.

Sex is Good (1999) is a giant puffball bursting open to reveal fluffy innards that look like dense clouds of spores, and out of it trail distended umbilical tubes of fabric and strings of hanging nodules. The work is rather like something from an electromicrograph scaled up fantastically and then knitted by your granny from remnants in her sewing basket. Dry, porous and strangely lacking in mass, it doesn’t seem to share any of the visual or tactile qualities you might associate with sex – unless you are a plant – but it is spectacularly apt. It’s hard not to speculate how Gastaldon and Wicker’s work can be so vividly evocative: the colours seem arbitrary, the material unlikely and forms almost incomprehensible. But they draw you into reflection on why you might feel a very particular way about a small quantity of spun sheep’s hair, a few lazily looped strands of embroidery thread or hazy graphite trails on a sheet of paper. More surprisingly, their work is able to evoke that peculiar moment when a memory crystallizes and brings back for an instant a recollection of yourself at the specific moment of time at which it was born. This is the hardest thing of all to consciously remember: how you felt about the world at a certain point in the past.

In the same way that NASA has staff who spend their time making oil-painted interpretations of data from deep space, or research labs have fully-fledged ‘electron-micrograph artists’ who enhance and artificially colour images to highlight areas of importance, perhaps the world needs people like Gastaldon and Wicker who can take the most complicated of human activities – sex, religion and politics; the three proscribed subjects of polite conversation – and knit them into a semblance of legibility. 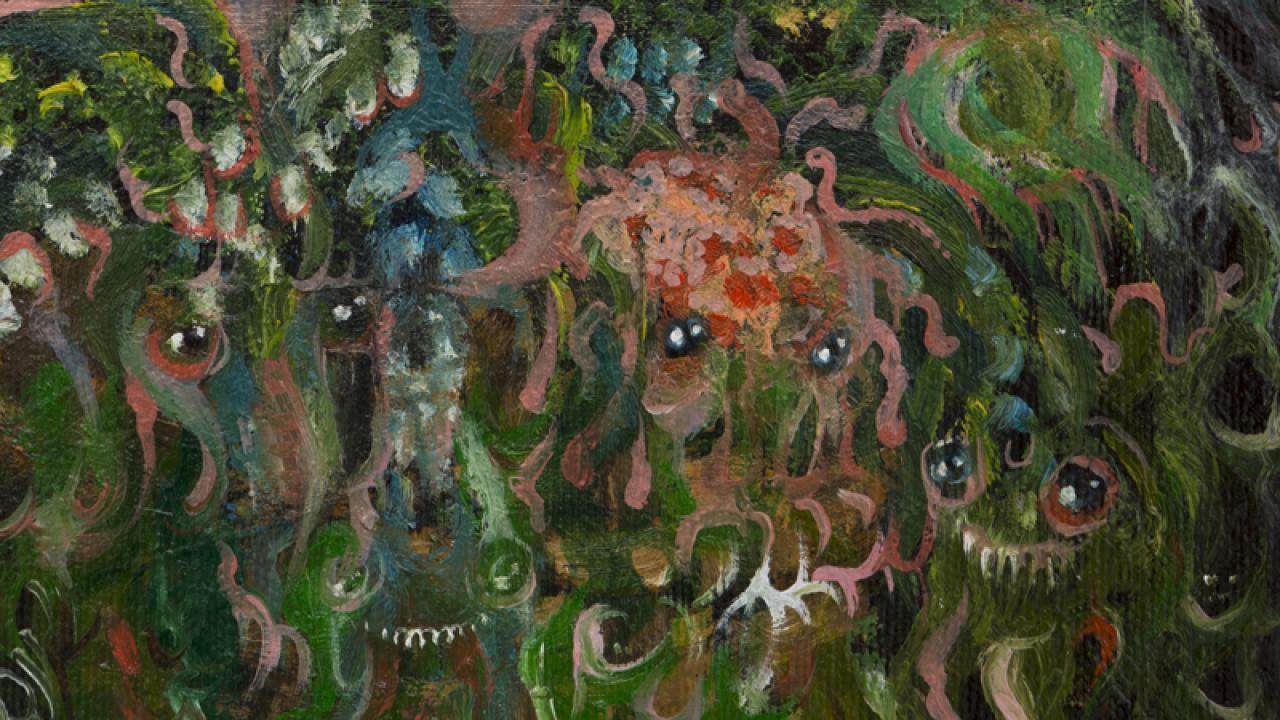 The changing landscape of the French capital’s gallery scene

BY James Roberts | 08 JUN 95
Reviews
Down With The People