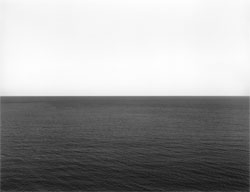 The largest room in this exhibition, the first retrospective of Hiroshi Sugimoto’s work, housed 20 of his monochrome seascape photographs, made between 1980 and 2002. The artist began making these after wondering whether it was still possible to photograph a scene in the contemporary world that was identical to that viewed by ‘primitive man’ (his words). The result is a series of large-scale sea views. Each measures over a metre by a metre and a half, and are made with Sugimoto’s antiquated large-format bellows camera and gelatine silver process. Exposures are long, and the grain is exceptionally fine. The composition in each case is identical, the horizon dividing the image into two equal parts. Subjects range from the English Channel to Lake Superior, and there is plenty of variation in light conditions, but the technique produces more or less identical results. To Western viewers they are reminiscent of Conceptual art's taxonomic projects: Ed Ruscha’s 1970s photographic works for example. Just as he once made LA’s awesome proliferation of consumer choice seem absurd through repetition, so it is perhaps with these seascapes: the most obvious image of romantic yearning in Western culture, the sea, is here made flat and meaningless through repetition.

But the Mori installation didn’t have a trace of irony about it. Instead it was presented as a space for serious contemplation. It occupied a big, high-ceilinged, L-shaped room that also contained a sound installation and a stage for Noh plays, which were periodically performed throughout the duration of the exhibition. The latter was a remarkable structure in itself. Rising to waist height, it formed a barrier between the viewer and some of the pictures, and demanded to be looked at. The awareness of its function as a stage did little to negate its perception as a sculpture; the repeated lattice structure, its spatial relation to the room, and to the size of the human body all invited exploration. The other curious element was an installation by Ikeda Ryoji exploring the range of possible sounds, from tones outside the range of human hearing to a deep rumble which threatened to shake the pictures off the wall. At the upper end of the range most visitors hear nothing but experience an unaccountable pressure in the ears.

The contemplative atmosphere was by no means undermined by the eclecticism of Sugimoto’s imagery elsewhere: drive-in cinemas, tall Modernist houses, dioramas of cavemen and woolly mammoths, a waxwork of Emperor Hirohito, an architectural model of a reconstructed shrine, and the thousand carved and gilded Buddhas from the temple of Sanjusangen-do. In the catalogue Sugimoto’s oeuvre appears more varied still: in one startling image from 1994 a waxwork of the St Albans poisoner leers out from a mocked-up English prison (The St Alban’s Poisoner), unmistakable to fans of the 1970s’ British sitcom Porridge. But Sugimoto’s methods here and everywhere have the effect of flattening out difference, of abstracting the photographed subject from its historical and geographical context and producing the effect of respectful, even devotional, meditation.

The overall effect recalls the installation designed by Mark Rothko for the Four Seasons restaurant at the top of the Seagram building in New York, now owned by the Tate. In both cases the accumulation of large, quiet, repeated abstract forms produces a vaguely ecclesiastical space that means everything and nothing at once. At the Mori such church-like qualities are in decisive contrast to the surroundings of Roppongi Hills, where Mr Mori himself, Tokyo’s leading property magnate (and latter-day Corbusian), is demolishing most of the existing urban fabric to replace it with towers. His 55-storey Mori tower, which houses his museum, is just the first of a series of similar projects. You see all this before entering the galleries, from the mind-blowing observation deck. Here the scale and violence of the proposed changes can be appreciated, as can the realization that much of Tokyo, the world’s largest metropolis, is in flux. The Sugimoto exhibition is a brilliant counterpoint: a space of civilized calm and quiet that is both a contrast to, and a legitimizing cover for, the noisy processes below.