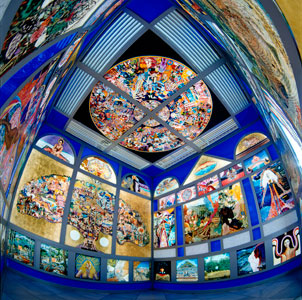 As Jefferson Airplane warbled, the strobe lights quickened and the visiting crowds pressed ever closer in the galleries of the Whitney Museum, the similarity between hippies and zombies suddenly fell into place. It was not just because both groups appeared in popular culture at roughly the same time. (The term ‘hippie’ was coined by journalist Michael Fallon in 1965; George A. Romero’s Night of the Living Dead was released in 1968.) Nor was it down to the essential similarity between the hippie mantra ‘feed your head’ and the zombie cry of ‘brains!’ Rather, it was the fact that both hippies and zombies seem to share an absolute refusal to die.

The tenacity of the hippie, and of 1960s’ counter culture in general, has been due more to improved health care than to the arrival of the Day of Judgement, but this tenacity has rendered much of its once-radical iconography strangely
invisible. It has become almost impossible actually to see Robert Indiana’s Love (1965) or Richard Hamilton’s Release (1972) – both on show here (allegedly) – so familiar have they become. They seem to blend into the background. Or rather, they have become the background.

Archigram’s awesomely weird Walking City designs (1964), help inject some humour into a show that somewhat unsmilingly seeks to canonize the subversive. Similarly, the precision of Lucas Samaras’ Chair Transformations 12 and 25 A (1969–70) places them quite at odds with the rambling counterculture perennials that surround them. Abdul Mati Klarwein, on the other hand, is freed from the confines of the Santana and Miles Davis record covers for which he is famed, and is represented here by two mammoth works, A Grain of Sand (1963–5) and Aleph Sanctuary (1963–71), both cabbalistic explosions of gurus and girls, sunglasses and sigils, which reveal Klarwein to be the Hieronymus Bosch of ’60s’ mysticism.

Yet for an exhibition supposedly devoted to psychedelic art, there were an awful lot of black and white photographs of well-known musicians and celebrities. Indeed the Whitney (like Tate Liverpool, from whence this travelling show came) seems much more interested in explaining the cultural and sexual convulsions of the ’60s than art per se. The exhibition arrived in New York perfectly timed to coincide with the summer of love’s hot and humid 40th anniversary, with an increasingly unpopular war dragging on overseas and a nationwide wave of baby-boomer nostalgia and neo-flower power hype at home. And since so many of those who came of age in the ’60s are still alive, the work seemed less an objective reappraisal than something of a staged celebration.

Not that it shouldn’t be celebrated, of course. The hippie revolution ranks as one of the most successful social upheavals ever to have taken place. It was also relatively bloodless (aside from such friendly-fire casualties as Jimi, Janis and Jim). But what it does share with other revolutions is this obsession with organizing pageants to itself. Not a year goes by, it seems, without Richard Avedon’s portraits of The Beatles or Gustav Metzger’s liquid crystal light shows being wheeled out again, like old members of the Politburo at a Stalinist military parade, waving at the missile launchers. There’s Comrade Jagger and Comrade Lennon, Comrade Ginsberg and Comrade Clapton. Will they ever die?

Of course, the real genius of the ’60s’ revolution, and the main reason for its continued survival, is that it decreed the language of revolt to every subsequent generation. Sex-and-drugs-and-rock-and-roll is now so accepted a prescription for rebellion that it has become as radical as aspirin. It’s something you take every morning to keep the blood thin and the conscience clear. As such, the ’60s are still part of the fabric of everyday life. Getting nostalgic about them is like getting nostalgic about breakfast. This being the case, the most off-key moment in the entire show is the inclusion of Thomas Wilfred’s exquisite mechanized light sculpture Lucatta, Opus 162 (1968). The work of Wilfred, who came of age in the Edwardian era, is in itself remarkable – rather like peering through the Hubble telescope at some distant supernova – and was a great influence on many psychedelic artists, but its inclusion here seems in direct contravention of the party line being espoused on the exhibition walls. For the myth of the ’60s is one of parthenogenesis, of creation out of oneself. There is no room for ancestor worship here.