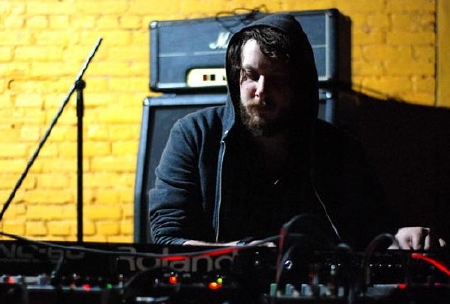 Daniel Lopatin, the electronic musician better known as Oneohtrix Point Never, has been receiving a lot of attention for his recent full-length album Returnal (Mego, 2010), and his new collaboration with the doe-eyed crooner Antony Hegarty of Antony and the Johnsons. But perhaps more striking is Rifts, a stunning double-disc collection released last year on the No Fun label, and a series of short videos, posted on YouTube under the alias Sunsetcorp and collected on a recent DVD, Memory Vague. Lopatin edited the hallucinatory, low-fi videos using Windows Movie Maker, with clips that he found on YouTube – Soviet broadcasts, Japanese consumer electronics commercials, vintage vector graphics.

But as Sunsetcorp, Lopatin prefers to cull his soundtracks from the syrupy trenches of 1970s and ’80s soft rock: Fleetwood Mac and Chris De Burgh’s ‘Lady in Red’ (1986).

Even the ‘Sunsetcorp’ moniker seems to adhere to the ’80s soft-rock ethos – the vague idea of sunsets, best viewed from a yacht playing some smooth Michael McDonald or Toto, maybe – combined with the idea of a faceless, bland corporate enterprise. (The name ‘Oneohtrix Point Never’ is a play on 106.7, the call numbers of a well-known Boston soft-rock radio station.) Soft rock has become fertile ground for exploration in recent years; think of the ‘yacht rock’ revival, showcased to great effect in a series of viral Internet videos, and Ariel Pink’s potent 1970s AM radio nostalgia.

In the short video ‘Angel’, Lopatin cuts up and loops Fleetwood Mac’s ‘Only Over You’ (1982), slowing it down to a crawl. (In a recent Village Voice interview with frieze contributor Simon Reynolds, Lopatin said that he had been inspired by DJ Screw, a pioneer of the ‘chopped and screwed’ technique.) ‘Angel’ cuts from a vintage Betamax commercial to a woman on a beach, and then to 1980s vector graphics, and then to another (presumably Japanese) consumer electronics commercial – this time a woman on a beach clutching a boombox and looking hauntingly at the camera.

The vector graphics look like clips of Robert Abel’s work in the early 1980s. Abel was a pioneer of computer animation who began working in the area in the 1950s as an apprentice to the filmmaker John Whitney. This is an AT&T commercial from 1980, by Abel and Associates:

In the Sunsetcorp video ‘Nobody Here’, the line ‘There’s nobody here…’ (a sample from ‘Lady in Red’) loops over and over, with a blurry graphic of a rainbow road leading to silhouetted skyscrapers in the distance. The effect is hypnotic, almost druggy; you begin to feel as if you could watch it for hours. That hypnotic effect is heightened to (quite literally) druggy levels in ‘Demerol’, a self-described tribute to Michael Jackson, named after the highly potent narcotic that Jackson is believed to have taken by injection on a regular basis.

The video ‘END OF LIFE ENTERTAINMENT SCENARIO #1’ uses a loop of the 1980s MS-DOS adventure game Manhunter, set to more soft rock – this time the slow-jam warbles of Roger Troutman.

While it’s not the most successful video in the Sunsetcorp oeuvre, it points to a factor in Lopatin’s overall aesthetic: vintage videogames. (In a recent interview on Factmag.com, Lopatin waxed rhapsodic about the elegiac soundtrack for the classic Nintendo game Metroid: ‘The music is really beautiful. I can only compare it to Dopplereffekt or Drexciya or something like that, but it was before all that, and so mystifying.’) It brings to mind Cory Arcangel’s dreamy Clouds (2002), in which Arcangel hacked a Super Mario Nintendo cartridge to continuously display scrolling clouds and nothing else. A powerful sense of nostalgia suffuses all of these Sunsetcorp videos – the blandly familiar soft rock, the deliberate blurriness (there are no high-resolution versions of these YouTube videos, because everything in them was originally sourced from YouTube), the ’80s graphics, the soporific, trance-like quality of late-night TV.

Geeta Dayal is a writer based in Los Angeles, USA.