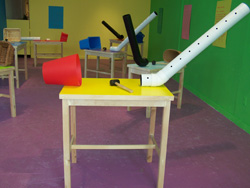 A collective based in Copenhagen, Superflex are a group of freelance artist–designer–activists committed to social and economic change. They produce not art works but what they call ‘tools’ – a word that stands in for a range of productions, including an Internet TV channel (Superchannel, 2000), the production of energy resources (Supergas, 2000), free stores (Free Shop, 2003; Merchandise Shop, 2005) and projects that deal with copyright, creative commons and intellectual property (Copyshop, 2005). These ‘tools’ are multifarious structures in which, according to the group, ‘power, hegemony, assertion and oppression, the gain and loss of terrain become apparent’. Sometimes criticized for not making ‘proper’ art, the group argues that ‘artistic praxis means a concrete cultural intervention that mediates between different interests, or at least’, in an Althusserian turn, ‘makes them visible’. This may point to a strange, tautological fold in the exhibiting of such ‘tools’. Can one make ‘making visible’ visible?

Superflex’s exhibitions at Jack Hanley Gallery and 1301PE were, contrary to expectations, a lot like works of art – not so much ‘tools’ to make visible the different interests involved, but rather aesthetic riffs on the theme of copyright. The Los Angeles exhibition consisted of 40-odd chairs, arranged in a rough grid. The chairs were commercially produced imitations of Danish designer Arne Jacobsen’s Ant Chair, a classic mid-20th-century product made from formed plywood and metal-tube bases. These ‘knock-offs’ were constructed to be slightly different from their high-design forebears, with curves and flourishes just different enough to avoid infringing on Jacobsen’s copyright. With the aid of power saws, Superflex modified these ‘knock-off’ chairs to conform more closely to Jacobsen’s original design. By making a few simple alterations to their shape, Superflex had transformed legal replica chairs into illegal, bootleg Jacobsens – in the process demonstrating just how arbitrary, and anti-materialist, the rules governing copyright really are. Sawdust and slivers of wood seat – surpluses added by the imitative designers and removed by Superflex – were strewn on the floor. The ‘legality’ of the ‘knock-off’ chairs was rendered as mere material fragments, soon to be discarded.

‘Free Beer and Counter-Game Strategies’ (2007), mounted at Jack Hanley in San Francisco, was harder to grasp or negotiate: a bizarre, messy games room. The exhibition consisted of seven simple two-player games, ‘machines’ whose processes culminated in a single, screwball-symbolic act: the frantic smashing of a potato. Each gamer was asked to assume an archetypal position in order to begin play. For The Poetry Machine (2007) a player – ‘the poet’ – rolled a potato – his or her ‘poem’ – down a tube. As it emerged from the other end, the ‘critic’ smashed it with a mallet, before pushing the squashed tuber into a basket at the other end. Other games presented different relations to the same end: The Anti-Piracy Machine (2007) ‘model(led) the noble struggle against counterfeit goods of all kinds’, culminating in the ‘police’ squashing ‘bootleg’ potatoes. Another game produced protected digital material (another potato) while ‘hackers’ at the other end hammered away.

These games were intended to represent the absurdity of the power relations that surround and superintend the production of culture – in each case an act as pointless as squashing vegetables. As the potatoes ripened, the room began to swarm with flies – an appropriate enough metaphor for a set of rotten situations. The danger of these circumstances is that the objects produced merely represent their ‘infringement’ manneristically, rather than enacting it. The chairs’ status as art objects complicates this matter considerably. Are they not a commentary on the conditions of copyright, rather than a clear violation of it? I don’t mean to battle over semantics, except that that is what the identity of these things depends on so completely: the strange fact that what’s shown in art galleries becomes art (and its makers become artists) by the force of its context. The strange, difficult force of Duchampian nominalism poses problems for political work like this – especially insofar as ‘modelling’ requires a symbolic rather than a pragmatic language. ‘Instead of the illusion of things’, wrote Clement Greenberg in 1948, ‘we are offered the illusion of modalities: namely, that matter is incorporeal, weightless and exists only optically, like a mirage.’

‘Free Beer and Counter-Game Strategies’ would seem to suggest that Superflex understand the confounding position they’re in. It is hard, however, to tell whether the ‘machines’ are meant to be a grotesque, simplified version of things as they are – a cynical take at best – or a lacerating and comedic self-critique. I’m hoping it’s the latter. Is criticism really such a blunt and crushing instrument? Are art objects as vulnerable, as lumpy and as interchangeable as they sometimes appear? Let me put down my mallet for a moment. Let’s work this out.