Sympathy for the Devil

Novel ways to sell your soul 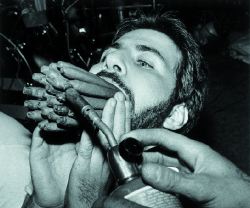 It is now common for artists and galleries to employ Public Relations agencies, and the media coverage of 'Sensation' demonstrated, once again, what a brouhaha can be generated by a well orchestrated PR campaign. One such agency, London's Borkowski PR, recently mounted a show (and published a book) celebrating 'The Art of The Publicity Stunt'.

The trick of a good PR stunt is to do something so absurd, intriguing, offensive or amusing as to make it irresistible to the media. Avid self-publicist Salvador Dalí once held a press conference for the duration of which, and for no apparent reason, he held onto an eight foot croissant. Andy Warhol hired a look-a-like who would go to functions and get himself photographed with celebrities.

What makes a stunt entertaining is the degree to which it amuses; which is usually related to the degree of audacity employed in its execution. In 1937, for example, Russell Birdwell was asked to publicise the film The Prisoner of Zenda for David O. Selznick International. He managed to find a town called Zenda in Ontario and flew the entire population to New York for the premiere. For the price of twelve plane tickets he secured massive publicity for the movie; even Time magazine reported it. But for sheer audacity, Jim Moran has to be at the top of the league. It was he who uttered the PR profundity 'In all of this world there is nothing more dismal than a fact.' Moran's finest hour was his attempt to make airborne three dwarves in Central Park (they were attached to kites plastered with advertising). Although this stunt was stopped by the police, it got lots of attention.

Moran, in turn, had as mentors people like Harry Reichenbach. In 1920, Reichenbach checked into the Hotel Belleclaire in New York under the name Thomas R. Zann. He arrived with a large box containing, he claimed, a piano which he asked to be hoisted into his room. The following day he phoned room service and requested 15 pounds of raw meat. This, naturally enough, aroused the curiosity of the management who went to the room to find T.R. Zann and his lion. The police were called, the press turned up, and the advance publicity for The Return of Tarzan had begun.

Moran and Reichenbach were both superb self-publicists, attention seekers with a natural aptitude for hyperbole. In the early days, press agents were often hoaxers, hucksters, and ex-hacks. The measure of a stunt's success is how widely it is reported, and by the mid-19th century the showman and circus founder P. T. Barnum had understood the notion of creating legitimate news by getting involved with the law. He managed to get his Bearded Lady (a Swiss woman called Madame Josephine Clofullia) arrested as a male impostor by writing a letter to a newspaper. Her subsequent trial and acquittal were also widely reported. This particular method of creating publicity was used by Barnum time and again. He would write anonymous letters to editors denouncing and defending himself (which would be printed in the public interest), and his ticket sales would rise. 'The titles of humbug and prince of humbug were first applied to me by myself', he wrote in his autobiography with worrying pride. His technique proved to be enduringly successful. Legal entanglements always provide the media with a justifiable reason to cover even the most transparent PR events. To be sued, banned, barred or otherwise involved with the law always achieves results. The planned arrest as a deliberate tool of civil disobedience is still a regularly used stunt.

In 1913, a New York gallery hired Reichenbach to help them get rid of 2000 ten cent lithographs of an innocuous female nude entitled September Morn. He managed to orchestrate a ban of the picture by harassing the head of the anti-vice society. After several outraged letters and phone calls (from Reichenbach and friends) the censor was eventually taken to view the print on display in the gallery window. Reichenbach had paid a group of boys 50 cents each to stand in front of the picture 'making grimaces too sophisticated for their years'. The censor was thus prodded into action and ordered the picture to be removed from the window. The gallery owner refused, and the resultant commotion insured lots of press coverage. Other exhibitors followed suit and the print sold seven million copies at $1 each. (In 1977, Malcom McLaren is alleged to have been a prime mover in the banning of the Sex Pistols' record God save the Queen. It shot straight to number one).

The first independent publicity firm was founded in Boston in 1900 by three former newspapermen. People had begun to realise that it was far cheaper to hire a press agent than to employ an advertising agency and buy space in the media. It was also apparent that anything appearing in the editorial section of a paper had a greater legitimacy than an advert. Before long, the police got fed up with being used by press agents to provide legitimacy, and an association of newspaper publishers made efforts to stem the tide of this 'puffery'. It was a losing battle, the newsmen were co-manufacturers of these pseudo-events and willing to be spoon-fed material to fill the ever increasing number of column inches. Press agents proliferated and had to become more devious and skilful at manipulating events to compete for the attention of the public.

By the 1920s, Freud's nephew Edward Bernays was desperately trying to get the field of public relations taken seriously. He declared himself practitioner of a new profession, to be known as Public Relations Directors, in order to distance himself from the unsavoury reputation garnered by the antics of most press agents. Bernays is known as the father of PR, and it was from this time that the notion of 'image' began its rise to intolerable importance. PR gained a degree of legitimacy throughout the 1930s and 1940s, when the US government set up press bureaux in every department, and in World War II, governments used the talents of PR men for the dissemination of propaganda. Press conferences became a regular feature, and press releases or 'handouts' were fed via papers to the populace.

In the post-war period, Senator Joseph McCarthy was a masterful self-publicist whose congressional career from 1947-1957 was peppered with creations to keep him in the news. He invented the technique of holding a press conference in the morning to announce that he would have something to say at a press conference he would hold in the afternoon. This would ensure that he would appear in the afternoon editions of the papers. Richard Rovere, a Washington reporter during the McCarthy era wrote 'he knew how to get in the news even on those rare occasions when invention failed him and he had no un-facts to give out.' This lunacy was prescient. Our desire to have all the facts, combined with ever expanding media, has meant that we are well into the inexorable process of the world being PR'd into meaningless absurdity.

Only a handful of stunts make good anecdotes and even fewer make for interesting photographs. There are only two motives behind any stunt: protest or profit. The most enduring and affecting images are those motivated by strong beliefs: Greenpeace activists dwarfed by the monstrous bow of a whaling ship bearing down on their tiny dinghy; a calm, cross-legged Buddist monk engulfed in flames as a protest against nefarious injustice in Vietnam. Aside from illustrating that there is nothing quite like setting fire to yourself for attracting attention, there is something distasteful about viewing these acts of self-sacrifice as stunts.

These colourful synthetic happenings are merely the visible parts of the PR iceberg. The rest of it operates in a murky world where fact and fiction are indistinct. Much of what we now consider to be news is comprised of packaged pseudo-events created for the convenience of the reporting media. Even the interview, now a legitimate journalistic device, was described in The Nation in 1859 as 'generally the joint product of some humbug of a hack politician and another humbug of a reporter'. We are trapped in a world in which most information is mistaken for knowledge, and has, at best, an ambiguous relation to reality. Socrates summed it up in Plato's Phaedrus: 'you give your disciples not truth but only the semblance of truth; they will be heroes of many things, and they will have learned nothing; they will appear to be omniscient and will generally know nothing.'