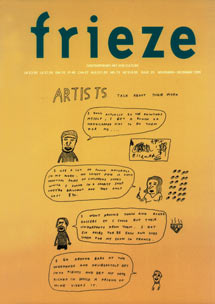 Some works of art seem to be made to fit pre-established debates. If the debates are active and the work is done well, then the operation can have a certain merit. But what about pushing the envelope? Going around Tania Kovats' show gave me a sense of complicity. Initially I liked the work, but then I became worried that I liked it because I'd find it easy to write about. Perhaps we've just been reading the same books - too much Julia Kristeva? Whatever the reason, we seem to have been sharing someone's idea of zeitgeist.

The earliest piece on show was Virgin in a Condom (1992). This work, which exists as a multiple, consists of a small statuette of the Virgin encased in a condom (apparently the condom has to be replaced every few days as the latex perishes). Striding gamely into the thickets of the politicisation-of-women's-bodies debate, it could be said that the condom operates as a neatly ambivalent symbol of protection/suffocation; one that recalls the Madonna/Whore dichotomy, as well as the oppression perpetuated by the Catholic ban on barrier methods of contraception - and perhaps even the different form of oppression manifested in the 60s cult of promiscuity.

And then what? Didn't we know this? Or did we? And who is this 'we' anyway? When a Catholic MP looks at this work he gets it removed from an Arts Council funded exhibition (David Alton protested to the chairman of the Arts Council, Lord Gowrie, who used his position to have the work withdrawn). When I look at it, I can't help but think of the Benetton adverts of a few years ago: the ones that used arresting images and hot-button issues in order to sell jumpers. Yes, alright, I'm cynical and the issues in question remain vital, even if condoms are no longer a 'trendy' media cause, but I still don't think that the piece does much to extend the debates on which it touches.

To be fair Virgin in a Condom does not represent Kovats at her best and the work was also in some sense an appendage to the show. It comes from an earlier body of work and was exhibited downstairs, in the offices of the gallery, perhaps in protest - the 'Art Unlimited' exhibition, from which it had been withdrawn, had just completed the London leg of its tour. The work Kovats showed upstairs more properly fitted the title of the exhibition, 'Landscape', and sometimes offered a subtler image of the membrane between matter and ideas.

The largest work on show, Grotto (1994), was a kind of cave set into the gallery wall. This two metre high construction suggested a niche in which a statue or an apparition might appear. The interior of the cave glistened wetly, while pink roses grew around the entrance. The work made reference to sites of pilgrimage, to the tradition of grotto architecture and even to cheesy restaurant decor: the superstructure was of fibreglass, the wet look was achieved with gloss paint and the roses were plastic and artificially scented.

By throwing together these references Kovats made a fairly good point about the gendering of the sublime. Her landscape was deliberately artificial, and drew attention to the equally 'man-made' concepts of the 'natural' and 'supernatural' on which its original models drew. Recent theorists have argued that the symbolism of the sublime is founded on a displacement of the female body - the ultimate source of masculine horror and fascination - and Kovats' grotto was indeed extremely vaginal. However, by making the work so large and crass, Kovats came dangerously close to camp, thereby largely dispersing the anxieties the piece addressed.

Arguably the best works in the show were a trio of smaller sculptures from earlier in the year, mimicking the stylised stony landscapes of religious art. Landscape I: Mountain (1995) for instance, evoked the fantastic outcrops amongst which one might find a hermit in a Northern Renaissance painting. Kovats had re-created these landscapes in unpainted plaster, making them look suspiciously like Modernist maquettes. The quieter irony of these works seemed more effective, allowing the artist to access their over-determined artistic and religious imagery without acceding to its authority. These landscapes were both half-empty and half-full, hinting at the acts of faith needed to turn them into works of art or objects of devotion.