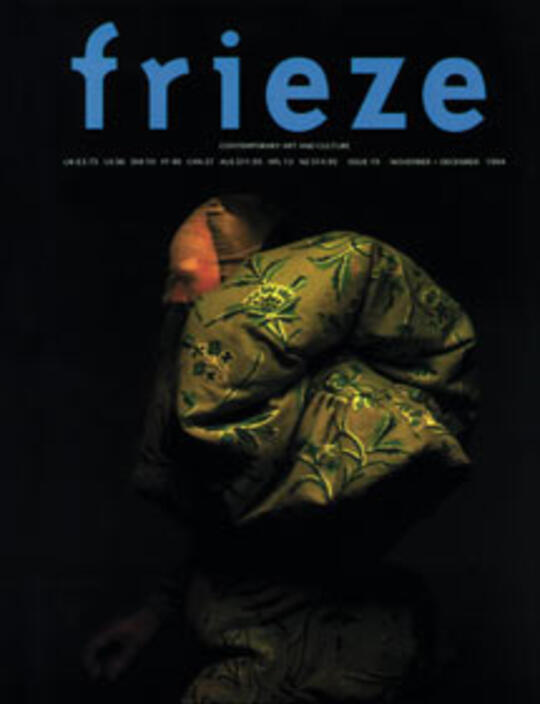 Whenever I hear the word cyberpunk I reach for my anorak repellent. Given the choice between J.G. Ballard and William Gibson, I opt for the former every time. My technological armoury consists exclusively of a steam-driven PC used as a glorified typewriter. So what was I doing at 'Terminal Futures'?

The ICA weekend event aimed to explore 'the hype and the hope' of new electronic media, promising a concentrated snapshot of how this field constructs itself. What is its jargon, its philosophical moves? What music does it listen to? How quickly would I develop a virtual attention span (i.e. nod off?) 'Terminal Futures' consisted of ten symposia over two days, (some of which had queues stretching out of the building and into the Mall), including presentations by Australian cyberfeminists VNS Matrix; American techno-activists Critical Art Ensemble; and European representations by, amongst others, Milan's Decoder group and Miss Akira from Amsterdam pirate radio station, Radio Patapoe.

During the weekend it transpired that activists and aesthetes alike shared the same set of philosophical reference points - Deleuze, Bataille, Foucault, Baudrillard, et al - out of which mostly came cyberbabble. For lucidity and an unusual absence of the evangelism that so often accompanies techno-activists, I listened to Steve Kurtz from Critical Art Ensemble. His was the best of the papers concerning strategies for maximising the communicative potential of new technology through wresting control from the State or proprietary culture. What was most interesting about Kurtz was the straightforward modernist romanticism in his declaration of faith in a new avant-garde, corresponding to late 19th / early 20th century models. Inter-war Futurism is the ideal analogy here - the same fetishisation of the machine, the same potential for promiscuous political affiliations, the same overheated libertarian rhetoric. Given the institutional location of CAE at Carnegie-Mellon University, where the 'smart weaponry' deployed in the Gulf War was developed, the romantic-modernist approach made some kind of sense.

Surveying the field as represented by 'Terminal Futures' it became increasingly clear that the most astute and interesting of the practitioners and pundits shared this appeal, if not to modernism per se, then to the 19th century, for their references and inspirations. In his presentation on pioneering work in computer art and music, Stephen Holtzman demonstrated how the formulae of Kandinsky and Schoenberg have been used as software models for modern experiments. Likewise, the three most singular artists exhibiting here, Stan Douglas, Grahame Weinbren and Toshio Iwai, were also looking backwards to look forward. References to early cinema and pre-cinematic vision machines unite all three. Douglas' Ruskin BC: Pursuit, Fear, Catastrophe (1993) takes Schoenberg and silent cinema as its points of departure in its politicised deconstruction of processes of cinematic signification. In Sonata (1994), Weinbren has forged the most intellectually ambitious of the 'interactive cinema' works at the event. He understood the notion of 'interactivity' as not in itself new, nor necessarily intellectually lightweight. Rather, it can be used as a flexible tool in the process of perception. In its reading of Tolstoy's The Kreutzer Sonata via Freud's case study The Wolfman, Sonata combines cinematic technique with computer interactivity to allow the spectator to organise his or her own pathway through a labyrinthine proliferation of associations. With its unashamedly high-brow reference points, Sonata stood defiantly apart from the other experiments in interactive cinema present, in that it had ambitions beyond the desire to relive one's first experience of Blade Runner. Burn:Cycle (1994), the 'interactive action movie' by London's Trip Media for Phillips' CD-i stands as the current paradigm of this tendency. Real toys for the boys stuff, its aspirations are visibly caught between the headlong narrative thrust of the action movie and the delirium of Japanese manga.

If Weinbren is interactivity's Eisenstein - to overwork the modernist analogy a little - then Toshio Iwai is its Disney (remembering that Sergei was a big fan of Walt). Iwai's presentation of his work in Saturday's highly popular 'Digital Aesthetic' symposium was a revelation. His work is consistently remarkable in its lucid and simple execution of strong ideas; he has the complete command of multimedia that a virtuoso has of their instrument. Starting with flip-book animation, Iwai has since gone on to reuse pre-cinematic machines such as the Phenakistoscope and the Zoetrope as if cinema had never been invented. He creates hallucinatory interactive video installations for public and gallery spaces, and his TV work in Japan has made him a cult figure. His most recent piece of interactive work Music Insects has the remarkable ability to make visible the act of musical composition and is currently being adapted for the Super Nintendo Entertainment System. The Disney analogy is not wholly fanciful: the reaction of the ICA audience to his work was akin to what one imagines of the first Disney audiences - laughter, delight and wonder. It was illuminating to see this recourse to early modernism and pre-cinematic techniques as a vital defence mechanism in the face of the largely uncritical enthusiasm towards the whole cyberpunk/apocalypse chic.