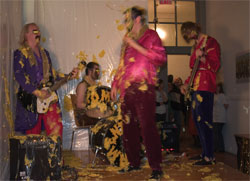 The Backroom, a ‘research project temporarily occupying a space in Culver City’, plays off its situation in the midst of the overheating art/property speculation complex and air-conditioned, quasi-Minimalist 1980s’ cool of LA’s latest gallery strip. Curators Magali Arriola, Kate Fowle and Renaud Proch invited artists to present the research material that their working process needs or generates, ‘to counterbalance the increasing emphasis and value placed on product’: a flashback to avant-garde Europe post-World War II, where to actually finish a painting or hold an exhibition was to surrender to the conservative forces that were reshaping the art world.

David A. Bailey’s ‘Back to Black: Art, Cinema and the Racial Imaginary’ at the Whitechapel opened up the frames of reference for cultural production in Britain in the 1960s and ’70s. Francesco Bonami’s ‘Universal Experience’ at the Hayward updated the grand narrative exhibition with a timely look at critical contemporary practice in terms of globalization and cultural economies. Although not a perfect show, it included some great works. I was also fascinated by ‘Regarding Terror: The RAF Exhibition’ at Kunst-Werke in Berlin. The gong for worst thematic exhibition of the year has to go to ‘Colour after Klein’ at London’s Barbican Art Gallery – a simplistic presentation of works by some of the 20th century’s great artists reduced to chromatic signifiers.

‘The Perfect Medium: Photography and the Occult’, a show of early photographic attempts to picture the paranormal, made clear yet again that most of the self-consciousness we attribute to Conceptual photography of the 1960s and Postmodernism was present in the discipline long ago.

Curated by Bob Nickas, ‘The Painted World’ – P.S.1 Contemporary Art Center, New York, charted five decades of (mostly American) abstract painting and was less concerned with ‘how the world looks than with how the world feels’. Just filling several rooms with abstract paintings – in late 2005 – was an eccentric and possibly radical move. Nickas teased out some unlikely inter-generational dialogues in a show that was elastic enough to embrace the reductive poetics of Myron Stout, the trippy colour fields of Chris Martin, the loopy Modernism of John Tremblay and the fucked-up formalism of the late, great Steven Parrino.

Not that one can really qualify it as a ‘themed show’, but e-flux video rental (or EVR), which opened its Amsterdam branch in March, is one of those initiatives that, once under way, make you wonder why it hadn’t always existed. And even closer to this frank and deliberate, ‘we’re-just-doing-what-we-believe-in’ un-showiness attitude is an exhibition-cum-radio-station called Radiodays, organized by Amsterdam’s Appel curatorial class of ‘05 (http://www.radiodays.org/).

‘Open Systems: Rethinking Art c.1970’ at the Tate Modern featured a slew of canonical works as curator Donna De Salvo opted cautiously to register the widening geographic horizons of our backward look at that
germinal moment rather than risk the potential confusion of wholesale revisionism.

Nina Möntmann’s show ‘Opacity’ at UKS Gallery in Oslo was subtitled ‘Current Considerations on Art Institutions and the Economy of Desire’. It took the demise of institutional critique to re-present concerns that are crucial in the face of current privatization sprees and the phasing out of public space. ‘Opacity’ was also a group exhibition that presented a strong body of work by Kajsa Dahlberg, Sofie Thorsen, Markus Degerman, Stephan Dillemuth, Gardar Eide Einarsson and Danger Museum (Öyvind Renberg and Miho Shimizo).

Tacita Dean proved that artists often make the best curators with her forest- and daydream-flavoured ‘An Aside’ at London’s Camden Arts Centre, while the Wrong Gallery’s opening of ‘Gagosian Berlin’ was a brilliant act of guerrilla franchising, made all the more biting by the fact that this bootleg gallery’s first show was a decidedly un-flashy chronicle of the friendship between the artists Emmett Williams, Dorothy Iannone and Dieter Roth.

‘White Noise’, curated by Mike Stubbs, at the Australian Centre for the Moving Image, explored abstraction and the moving image; at the same venue I liked ‘World without End’, curated by Alessio Cavallaro and Alexie Glass. ‘Pitch Your Own Tent: Art Projects / Store 5 / 1st Floor’, curated by Max Delany at Monash University Museum of Art, examined the past two decades of Australian art through the lens of three influential artist-run spaces. ‘A Molecular History of Everything* (*Well not Everything)’, curated by Juliana Engberg at the Australian Centre for Contemporary Art, was a mock-serious curatorial bid to capture it all.

Axel John Wieder, Gertrud Berlin and Josef Strau’s exhibition ‘Now and Ten Years Ago’ at Kunst-Werke, Berlin, drew parallels to the links between artistic production and gentrification in New York in the 1980s and Berlin in the 1990s, with documentation of many subcultural, artist-led and activist activities that eventually contributed to more capitalist modes of urban development. Other highlights included Frederique Bergholtz, Annie Fletcher and Tanja Elstgeestis’ ambitious theatre festival ‘If I Can’t Dance I Don’t Want To Be Part of Your Revolution’, which included substantial new commissions developed in three parts in three different cities in the Netherlands.

Curated by Takashi Murakami for the Japan Society, ‘Little Boy: The Arts of Japan’s Exploding Subculture’ intermingled commercial objects, imagery from popular visual culture and fine art to explore a contemporary Japanese phenomenon – the prevalence of okatu, a subculture that brings together seemingly opposite sensibilities: an obsession with catastrophic violence and the predilection for all things cute, diminutive or nubile. It is Murakami’s premise that okatu has its roots in the metaphorical emasculation of Japan following Hiroshima and the subsequent American occupation. This generational trauma fuelled an already existing cultural tendency toward self-effacement. What was most fascinating about this show was less the effect of the individual art works (or, for that matter, the accumulations of Hello Kitty dolls) than how a convincing analysis of one nation’s psyche can be told through its consumer goods and cultural artefacts.

‘Dada’ at the Centre Pompidou, Paris is one of the best exhibition’s I’ve ever seen – the floor plan itself is a Dada masterpiece of exhibition design. Two shows that travelled within Europe, ‘Who if not we … ?’, coordinated by Maria Hlavajova, and ‘Populism’ curated by Cristina Ricupero, Lars Bang Larsen and Nicolaus Schafhausen, were thorough and important research-based projects. I would also nominate Tanya Leighton’s thoughtful, almost academic, show at Glasgow’s CCA ‘In The Poem About Love You Don’t Write The Word Love’; and, in hysterical (but no less thoughtful) contrast ‘Le Voyage Interieur: Paris-London’ curated by Alex Farquharson & Alexis Vaillant at Electra, Paris, which tested just how far you can go with over the top exhibition design. Emily Pethick’s ongoing independent publishing project-archive-fair ‘Publish and be Damned’, displays energy and commitment to a particular level of production and visibility and the bi-annual ‘Home Works Forum’ curated by Christine Tohme in Beirut – somewhere between a symposium and a festival – is a focal point for artistic activity in Lebanon and beyond, touching in richly diverse ways the relation of aesthetics to political efficacy, identity, history and the image.

With the laws of the media-ocracy increasingly governing politics and culture, to address the issue of populism head-on seems like the right thing to do. The exhibition ‘Populism’, staged by Nifca simultaneously in Vilnius, Amsterdam, Frankfurt and Oslo, therefore definitely made its point. By showing art that uses the very same Pop(ular) aesthetics as it deconstructs, it tested the potential of the immanent cultural criticism that a lot of art articulates today. By pushing this approach to the extreme, the show also showed its limits. It reminded you of the urgency of the need to imagine what could lie beyond the logic of the spectacle.

‘Populism’ in Vilnius, Oslo, Frankfurt and Amsterdam was a show that raised good questions even while making a bit of a fool of itself. What is populism in the first place? A decidedly accessible exhibition exploiting a media buzzword? Big names and big art works in four cities? Or is it, rather, frieze magazine enumerations of the best artists and nicest events – 100-word art-critical Roquefort cheese morsels on salted crackers? A second extra-large thematic show worth mentioning (even though it ended in November 2004 it travelled in 2005) was ‘Romantic Detachment’ at P.S.1, where the curatorial input offered a wry and rousing take on the annoying ‘return to interiority’ buzz still looming today. Tate Modern’s ‘Open Systems – Rethinking Art c.1970’, a retrospective of another kind, brought together key 1970s’ projects and art works rethinking Minimalism and Conceptualism. Despite the odd quirky categorization, this was a rare example of High Art made accessible in a mainstream venue without resorting to over-didactic simplification or cheap sensationalism.