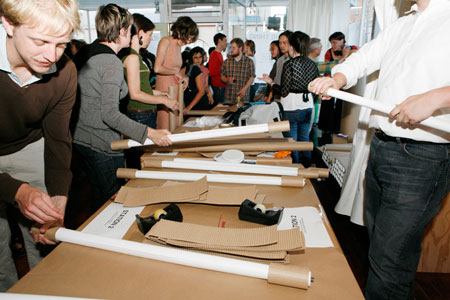 Conceived by San Francisco-based artists Will Rogan and Jonn Herschend, The Thing is a subscription service that delivers art objects. The eponymous ‘things’ are meant to be household objects that somehow incorporate text. Quaintly hand-wrapped and tied together with string, the ‘things’ will arrive on subscribers’ doorsteps at quarterly intervals. Significantly, the project is imagined as a publication rather than an edition: Rogan and Herschend emphasize the pleasure and mystery of the mail ritual and the dispersed collectivity of their audience rather than the imagined scarcity and exclusivity of the produced objects. Their initial run includes guest creators of some repute – Miranda July, Anne Walsh, Kota Ezawa and Trisha Donnelly – with more in the offing.

With only around 275 subscribers, The Thing is still mostly a family affair. This vibe was confirmed by the eccentric ‘office hours’ the two editors staged as a performance event at Southern Exposure in the two-week run-up to The Thing’s first mailing. Rogan and Herschend had originally pictured an oily office scenario, including the ‘flipping of Rolodex files, a drinking of coffee and a telling of jokes by the water cooler’, but the reality, at least on the occasion of my visit, was far more distracted – part assembly line and staging area, part chaotic showroom. Interns worked industriously to check and assemble the ‘things’ – screen-printed window shades by Miranda July – on tables in the centre of the room, as the artist-editors installed a wall display, worked at their laptops or talked to curious passers-by. Having created robot armour out of discarded boxes, Rogan’s rambunctious kids whacked each other with cardboard mailing tubes and clambered over the furniture. Not exactly your typical day at the office.

Part of a two-week residency leading towards a ‘wrapping party’, the ‘office hours’ made visible the communal effort involved in putting together the objects – these ‘things’ are products of a network extended well beyond the editors or the name artists. Their activity evoked the cottage industry modalities of indie record labels and ’zine culture more than mail art, where the object’s uniqueness and personalization is often the point. In this way, ‘office hours’ exposed a curious duality in The Thing’s central impulses: a romantic investment in the mystery of the objects, alongside a need to demystify the process of their production. These impulses seem at odds with each other in some ways, but this messiness can be attributed to the editors’ touching willingness to act out the project publicly at such an early stage, with imperfections intact.