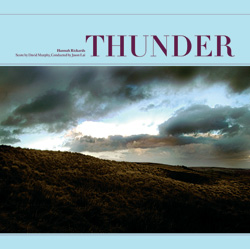 Ever wondered why we don’t sing along to the water cooler, hum car engine sounds or whistle with boiling kettles? Distinguishing between ‘music’ and ‘noise’ is something we do instinctively, separating the cultural activity of producing and organizing sounds from the chaos of clattering, rumbling, chirping, rustling, snapping, crackling and popping that constantly fills the world. If we didn’t, we’d all be endlessly distracted – I’m sure even John Cage couldn’t hear symphonies in every sound that drifted down his ear canal. Yet, just as distinct musical notes are, all these sounds around us are made up of pitch and timbre.

It’s this distinction that artist Hannah Rickards works to intriguing effect. For Birdsong, in 2002, she took samples of blackbird, blue tit, goldfinch, song thrush, woodlark and wren birdsong and lowered the pitch to human range. Having then learnt them note for note, she recorded herself singing them, and raised the pitch of her recording back up to the same level as the original birds. For her latest project, Thunder, Rickards has taken on Nature’s very own percussion section. A recording of a single thunderclap was slowed from eight seconds to seven minutes, and transcribed by composer David Murphy for a sextet of flute, trumpet, trombone, cello, viola and violin. This score was then performed under the conductorship of Jason Lai, recorded and squeezed back to eight seconds.

Commissioned and produced by Media Art Bath, Thunder comes as a 12-inch vinyl record. Side one – a narrow storm cloud of grooves encircling a vast plain of uncut plastic – is the compressed, thunderclap-length performance of the score. The fascinating aspect of this project is just how unlike thunder this sounds. Its register is oddly high-pitched, lacking the bone-shaking low frequencies of a violent tempest; it sounds like trickling water, or a tape player on fast forward. The overall effect is less Sturm und Drang and more one of wet rubber dragged across squeaking metal plates. I slowed the record right down on my turntable, moving it manually with my finger to see if I could match the sound of the instruments on side two, but with no luck. The flipside is dense, and tonally abrasive. Listened to whilst looking at the accompanying score, you’d be forgiven for thinking this to be a parody of ‘difficult’, European serialism. Yet, as Murphy observes in his sleeve notes to Thunder, what is unusual is that ‘this is un-composed music that actually sounds composed’.

Thunder’s sleeve is a perfect homage to the music library sound effects records of yesteryear; a fusion of does-what-it-says-on-the-tin literalism and Betjemanesque melancholy; that mix of poetry and pragmatism found in the Shipping Forecast, for instance. In addition to Murphy’s account of translating storms into scores, critic Dave Beech’s sleeve note argues that Rickards’ project is primarily a work of subversive de-skilling – one that highlights the aesthetic biases of skill when set against something culturally ‘neutral’, such as the weather. I would suggest this record articulates something far more primeval; our drive to harness the natural world, and turn ‘nature’ into ‘Nature’. Culture as shelter from the storm.