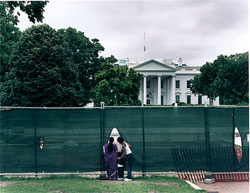 The 50 or so photographs comprising ‘My Life in Politics’, Tim Davis’ stunning election season show, feel like a photojournalist’s second cut, if only because the main event seems to have already happened. Photojournalists trade on access, but Davis didn’t seek any. He visited government buildings, rallies, protests, gun shows and campaign offices without any special permits or arrangements. As a result, he shows us only what we could have seen ourselves, and sometimes even less. In Press Only (all works 2002–4) Davis gives us the eponymously inscribed door of a press room at the Massachusetts State House, which has just been shut in his face. For Nixon Monument, Nixon Birthplace we get a beautiful close-up of an oil stain in the car park at San Clemente because they won’t let his tripod inside the presidential library. Billed as Davis’ search for his political life, the show felt more like a survey of the remnants of political activity washed up in the backwaters of American culture.
These certainly aren’t the first political pictures Davis has made, but they may be the first properly identified as such. An earlier body of work consisted of dreary suburban homes at night, whose windows glowed with the brash reflections of corporate logos from nearby strip malls, taking a clear but nuanced stance on big-business America and its role in blighted sprawl. They are gorgeous light studies indebted to Walker Evans and Lee Friedlander but were oversold on their formal qualities, to the detriment of their biting content.
Like Evans’ American Photographs (1938), on which Davis based ‘My Life in Politics’, the series’ images hew to a shallow depth of field that displays every detail, at the same time striving for a kind of genericism that implicates the entire American vernacular. While Davis has Evans’ elegant artlessness in mind – what Luc Sante described as ‘the eye of the future’ – his subject matter feels closer to Garry Winogrand’s pictures from the 1960s and ’70s of people at parties, press conferences and gatherings. Winogrand’s political photos – a peace demonstration in Central Park, a workers’ rally on a New York street – are packed scenes, filled with the energy of the moment. They are about our public lives, our shared civic citizenship, the things a nation cared about together during those divisive decades.
To people who lived through that period in America, it all seems a long time ago. Now when we take to the streets, we go to designated protest areas. In our political lives we are routinely shunted to the side, separated from the power game moulding our world. By virtue of Davis’ privilege-less approach ‘My Life in Politics’ repeatedly suggests this growing distance between ordinary Americans and their political process. In Circuit City President Bush is observed giving a speech simultaneously on three flatscreens at an electronics store, omnipresent yet inaccessible. In another image three figures peek through the cloaked security fence at the White House perimeter like explorers discovering a lost city through thick jungle. A picture of the Oval Office itself turns out to have been taken on a simulation set at the Jimmy Carter Center in Atlanta. The one shot we see of actual protesters in action is on a video camera’s playback screen in Mock Protest, Communist Summer Camp, where the gathering itself is nothing more than a run-through of dissent.
In general, Davis seems to have arrived well after the decisive moment, whatever it may have been. An anarchist naps on a couch, a popsicle melts beautifully across a rain-soaked protest placard, a sign advertising a Senate ethics committee meeting lies jumbled among a pile of chairs and abandoned soda cans. Elsewhere there are some self-reflexive moments that implicate the medium itself. Sam Durant’s drawings of protest photos become an ontological joke when Davis photographs them, as do the autographed congressional head shots pinned up at the US Capitol barbershop. Along similar lines, a portrait of Bush shot from a life-size cut-out features a Polaroid of a grinning mother and son posing with the same cardboard effigy.
This picture is emblematic of the quietly horrifying question underlying this show: what if people actually prefer the theatrical, surface-level engagement with politics that they are increasingly left with? What if campaign signs, badges, bumper stickers and flags aren’t simply the ephemera of Americans’ political lives, but their substance as well? That this dilemma happens to find resonance in photography’s arm’s-length provision of access to its subjects makes ‘My Life in Politics’ deeply sad and grand at the same time. Lacking an immediate experience of something, we’ll seize on a great photograph of it, even though the picture remains nothing more than what Winogrand termed ‘the illusion of a literal description of a piece of time and space’. Davis makes clear that, in spite of whatever public fuss there may be at the moment, ‘politics’ is something that is happening somewhere else, beyond the reach of the press, the camera and almost everything except our mind’s eye. With the details increasingly obscured by the opaque veneer of rhetoric and the carefully controlled public face of each candidate, Americans can barely imagine the forces at work behind this invisible screen; most of us hardly bother to try.