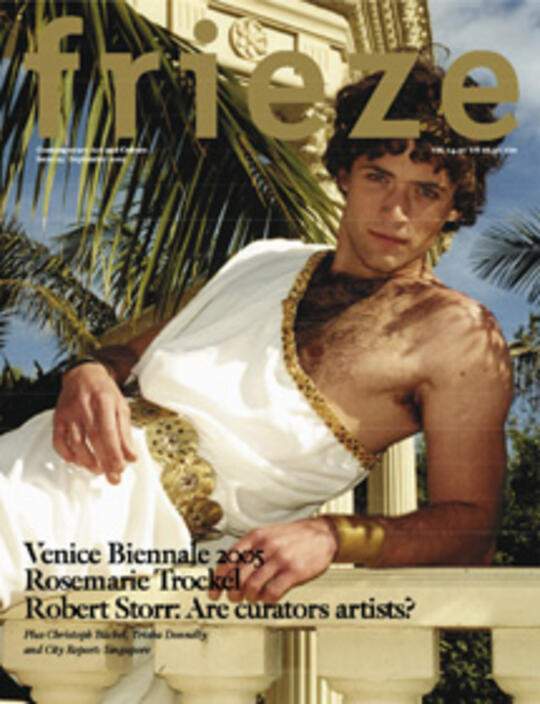 It’s hard to overstate the place of measurement and numbers in American life. Show the average citizen a building, and he’ll want to know how tall it is, how large and, above all, how much it cost. Size matters in America, and we cling to statistics like talismanic truths.

In Tim Hawkinson’s sprawling, comprehensive mid-career survey the artist was seen playing with all kinds of measurements: inches and feet, pounds and ounces, metre and time. But his own body, observed in myriad ways, is his most frequently exploited, if humble, unit of measurement. Signature (1993), a contraption that is both literally and figuratively his signature piece, embodies one such type of autobiographical measurement. Using a vintage school chair and its attached winged writing desk as a platform for self-deprecation and self-obsession, Hawkinson built an apparatus in which a motorized ballpoint pen endlessly copies out the name ‘Tim Hawkinson’ on rolls of adding-machine paper, producing a sea of chits that slowly engulfs the chair. Many of his pieces have their own rhythmic accompaniment – random sounds generated by crudely programmed or mechanically orchestrated beats, drips, pings and clunks. An inveterate tinkerer, Hawkinson hears the tick of time and mortality everywhere. (Among his various improvised chronometers are a modified tube of toothpaste and a light bulb filament that keep perfectly synchronous time.) The sheer confusion of wires and string that holds Hawkinson’s abundant output together testifies to his keen prolificacy and mechanical craft, for which he deserves full marks. Working your way through his exhibition can feel a bit like visiting a quirky DIY science museum where the displays are ‘hands off’, a fact that appeared to frustrate the museum-going adults as much as the kids.

Despite his place in an artistic lineage that includes Marcel Duchamp and his ready-mades and kinetic fixations, and Charles Ray (with whom Hawkinson studied) and his preoccupation with the body as prime reference point, Hawkinson does little more than carry these ideas to their goofiest, if undeniably clever, extremes. Falling a bit shy of producing any deep resonance or having any lasting impact on the viewer, the overall impression of his project is one of amiable, crowd-pleasing and essentially harmless tour de force. However, individual pieces do stand out: in Penitent (1994), for example, a skeletal supplicant composed entirely of rawhide dog chews and emitting swannee whistle sounds managed to equate a canine’s begging for scraps at the dinner table with a desperate desire for forgiveness in a morbidly funny way. In an untitled work from 2003 inkjet prints on foamcore panels show Hawkinson’s hands crossed above his head, each finger sprouting another hand, each of those fingers sprouting yet more hands into fractal infinity. The piece becomes nearly auditory, like hearing someone slip gently into madness.

Hawkinson never lacks ambition or ingenuity. His epic masterwork Überorgan (2000) (too large to be displayed in the museum, it was installed in a glass-roofed midtown food court) resembles a kind of gangly giant squid on steroids, or a mammoth translucent intestinal tract. The voluminous network of plastic sacks, ballooning biomorphic tentacles, bladders and gas bags hung over the heads of lunchtime crowds bleating out sonorous and unintelligible passages from old hymns and pop songs every hour on the hour, the whole thing controlled by a very low-tech programming system akin to that of a pianola. But Hawkinson’s biggest successes often come in smaller packages. In several works he uses detritus from his body – hair, fingernails etc. – to make dainty mini-sculptures. For The Fin Within (1995) he carved fish scales into a simple plaster cast of the negative space between his legs, the area around his feet fanning into a merman’s tail of unexpected delicacy.

While it’s difficult not to respond to his breathless insouciance or his drive to make art out of whatever comes his way, Hawkinson unwittingly taps into some of the less attractive qualities of American creative gimmickry. His methods and one-off ideas may have a certain mad genius to them, but they also need something more than material showmanship and low-tech bravura to keep them aloft. It would be refreshing if more of his work managed to pose problems rather than just illustrating their solutions, offering in the place of amusing gizmos and gadgets some real insights into the mechanisms of self, loneliness and fevered obsession at which they so often hint.